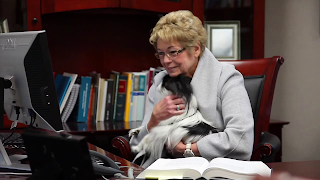 (Whittier Law School Dean Penelope Bryan cuddling a puppy in a promotional video. And I always thought that supervillains stroked pet cats).
I found a couple of  quotes from Dean Penelope Bryan of the Whittier Law School that I think are instructive. But to fully appreciate the quotes, you must first know that even among other law schools, Whittier is at the scammy extreme. The average debt load (excluding undergrad debt) for a graduating Whittier JD is $143,536, the 11th highest among the 201 ABA accredited law schools. However, the percentage of Whittier law grads from the class of 2012 who obtained bar-required full-time, long-term, non-solo jobs within nine months of graduation (i.e. its Law School Transparency [LST] employment score) was 31.2%, which was the 11th worst outcome among the 201 ABA-approved law schools. [1] And even that is a significant improvement over 2011, when it ranked second from the bottom among the 201 schools, with an incredible 17.1% LST employment score. [2]
Oh, one other nifty data point: Whittier Law School paid Dean Bryan $410,524 for the fiscal year 2010. [3]

Good Dean Penelope Bryan: "We consider this [Whittier’s placement results] a problem. We have redesigned completely our career development and we expect to see some improvement, but in the meantime we’ve had to live with this transition."  [4]

Why did Penelope Bryan (somewhat) acknowledge the dire problem at her school in the first quote, whereas in the second quote she touched the Zen of Pure Scam? Well, the first quote appeared in a Wall Street Journal article entitled "Law Grads Face a Brutal Job Market," where the reporter specifically asked the deans of several law schools to comment on their schools' poor placement outcomes. A "no comment" would have sounded evasive, and hype would have sounded ridiculous. Moreover, the Journal article was unlikely to have been read by many prospective students-- indeed, it was probably behind a paywall when it came out. The second quote, however, is from a six-minute long promotional video prominently featured on Whittier Law's website. It is far more likely to be viewed by prospective students.


I know that some may not take particular offense at the second quote, deeming it to be good old-fashioned public relations and marketing, similar to any industry. As long as the legally required disclosures are made somewhere, must a salesperson alert prospective customers to the problems and drawbacks of the product? Caveat emptor.
In my view, our profession requires more. How many times, as a law student and since, have I heard law deans and professors yap about the "majesty of the law," the "highest ethical standards" expected of us as lawyers, our obligations to society and to the less fortunate, and other such high-minded phrases and concepts. Probably, many students roll their eyes at such talk; but I believed it, and still do. However, wealthy law school deans and professors ought not promote standards of ethics and professional responsibility to their debt-ridden students without imposing equal or greater obligations on themselves, lest they be accurately deemed filthy hypocrites.
Dean Penelope Bryan of bottom-of-the-barrel Whittier Law School, do you regard your students and prospective students as future colleagues, and young people whose trust you must strive to earn? Or do you look at them and see big ambulatory bags of money to be corralled and pillaged?
__________________________

(8th worst excluding the three law schools in Puerto Rico which, for some reason, all report employment scores of under 14%).
[2]  http://www.lstscorereports.com/?r=other&class=2011#