As discussed previously, LSAC's new and improved data reporting comes on the heels of a significant increase in applicants for 2019, some 15% more compared to this time last year. 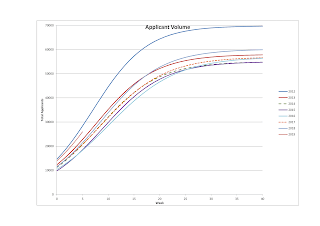 For those who care about the legal landscape, the current market, or the fate of future students, this is difficult to see as anything but troubling news.  For the Cartel, happy times are seemingly here again, as we are seeing data that goes back nearly to 2012, compared to the nadir of 2014-2015.

As per usual, the Cartel seems to miss the overall point - people are attending law school for laudable but unrealistic reasons for the most part.  And rather that discussing what is realistic (e.g. how many lawyers can the economy support), the conversation goes sideways into notions of the way things "ought to be":

Data show that large numbers of students entering law school say that they hope to work in the public interest, but then end up working for large firms instead — though debate rages about when precisely they defect and why. Debt burden is one explanation, but informal expectation and institutional pressures are probably more to blame. And the realities of this "public-interest drift" fit very poorly with the self-advertised rationales about how legal training in its current form serves social justice.

Debt-burden is the entire explanation, once one is removed from discussions surrounding the first-world problems of Yale or the remainder of the T14.  Whether one is working towards social change or something as pedestrian as merely trying to put food on the table, the "realities" are that we live and move and have our being within a market economy.  State and local government, to say nothing of foundations, are apparently unable to absorb the costs necessary to engage in the desired amount of public-interest work, which in turn asks struggling students to work for free.  While no doubt idealism plays a role, the crushing of said idealism forces many, many law students to do what they have to.  Perhaps if law schools charged less...?

To respond to this disheartening situation, law schools will need to consider how to reset their missions for those students no longer able to suspend disbelief about how their ideals and their training fit together.  The point is not to reorient law schools entirely. Their primary task will always be the production of lawyers for the bar — a core commitment with which other agendas will necessarily fit uncomfortably. Law schools will never be staging grounds for fundamental social change when they are organized to advise private dispute resolution and administer extant forms of public justice.

And a certain amount of hypocrisy and rationalization is the essence of most people’s ethical lives in all times and places, especially when those people are at the top of unjustifiable hierarchies. "The important thing," a moralist once remarked, "is not to be cured, but to live with one’s ailments." Ethically pure law schools are not an option. An age in which American elites have remedied some exclusions while leaving many others intact or even more entrenched, and in which "meritocracy" is a rationalization for unprecedented elite ascendancy, is one we have to inhabit indefinitely. Sure, it is hypocritical when Yale Law students, each and every one of whom chose to enroll because the institution is at the top of the rankings, indict the school’s proximity to power and prestige. But nobody is above hypocrisy.

This is at least a fair indictment of the situation.  We of the scamblog movement, however, have never "suspend[ed] disbelief about how their ideals and their training fit together."  That fact falls squarely upon the hypocrisy (recently admitted, above, now that it is late 2018) of the Law School Cartel.  In fact, perhaps we scamblogs were too brazenly cynical, but one of the planks of our movement is that law schools have sold pipe-dreams for decades in order to induce a flood of naive students to march to their economic (and perhaps idealistic) doom.  Sadly, the above data reflect the beginnings of a new flood, and I expect we will hear more "tsk, tsk" lamentations not about the fact that the gristmill exists in the first place, but that the gristmill is still not sufficiently social-justice-oriented-enough to allow the Cartel to regard itself in the mirror at night.

What if the truth of law schools is that their main social function, aside from producing the next round of elites, is that they buy off those who initially doubt that perpetuating elites is what law schools ought to be doing? If law schools faced this haunting question more routinely, they might resolve to demystify the law as a first step to reinvigorating democratic life. This would matter not just for the ethical conundrums of a handful of elites, but also to the country and the world.

A certainly worrying and justifiable conclusion, but I maintain that this hand-wringing pales in comparison to the thousands upon thousands of law graduates bound to modern-day indentured-servitude with few to no prospects.  While this may not occur around the halls of Yale, it occurs on a daily basis at scores and scores of law schools around the country.  Let's address the most egregious aspects of this practice first, and then turn our attention to the "elites" and their practices within the Halls of Power at Yale and Harvard and the social-justice-cooling effects there may be.

"Elites," I note, that are themselves complicit in the detestable practices at said scores and scores of law schools around the country.  The mal-administered "democracy" of the law student applicant cycle appears to begin anew, with Nothing Learned as to its effects or consequences.  0Ls, pay heed.

Posted by dupednontraditional at 09:48 126 comments:

Every year around this time, the ABA requires those law schools that have received its "accreditation" (scarcely distinguishable from a rubber stamp) to produce a "Standard 509 Information Report" presenting some basic data, notably on the class that entered in the autumn. We at Outside the Law School Scam read a sampling of 509 reports, principally but not exclusively from über-toilets. The reports can be downloaded here. Our friends at Law School Transparency have also updated their data in light of these reports.

As you might expect, the scamsters' effectively unaudited data don't reveal much. There are, however, a few highlights:

Thomas Jefferson enrolled only 59 students this year, of whom 52 were "Enrollees from Applicant pool" and 7 were "Other first-year enrollees". How exactly a person is admitted otherwise than from the applicant pool is not clear to me. Are people abducted off the street? Does Thomas Jefferson, like Harvard's undergraduate college, maintain a "Z list" of people admitted on the condition that they first spend a year lounging on the French Riviera? Anyway, 59 is a long way down from last year's figure of 241. It provides further evidence that Thomas Jefferson is not long for this world. Note also that a sixth of last year's 1Ls failed out (the ABA prettifies this category with the term "academic attrition") and that a tenth of the class transferred to other (unidentified) schools. Not a single person transferred to Thomas Jefferson.

Of the two remaining InfiLaw über-toilets, Arizona Summit enrolled 17 students—surprisingly many for a school that is not offering classes. That's below the number of full-time professors. Sixteen percent of last year's 1Ls failed out, and 41% transferred elsewhere. Florida Coastal, the other InfiLaw make-believe law school, enrolled only 60 students, down from 106 last year and 808 in 2010. A third of the 1Ls failed out.

North Carolina Central University won the ABA's favor this year by imposing a minimum LSAT score of 142. That measure, allegedly aimed at quality, sent first-year enrollment from 166 last year to 103 this year. Although almost half of the students got no discount at all, 11 students received "More than full tuition", which to Old Guy sounds suspiciously like a means of buying students. Discounts, after all, cannot exceed 100% of tuition; beyond that, the law school must dish out real money. How many grand does it take to bribe someone to sign up at North Carolina Central? Bear in mind that the LSAT score at the 75th percentile is only 150 (below the median for the entire pool of LSAT-takers) at this über-toilet, so apparently it wouldn't take much to cash in. I would not recommend attending for less than $20k per year in cash, but many people who otherwise would have ended up at some Tier 5 toilet instead take Tier 6 North Carolina Central plus a few dollars.

Cooley (listed as "Western Michigan University") still brings up the rear on the LSAT, with at least a quarter of its entering class at 139 or lower. Enrollment went up significantly this year, even though most students got no discount on the astronomical annual tuition of $53k.

Appalachian, that Cooley of the Blue Ridge, saw its enrollment nearly double to 73 last year, but this year was down to 50.

The University of North Dakota is as shitty as ever, with its LSAT score of 150 at the 75th percentile. First-year enrollment declined from 71 to 62, but 28 students transferred in: 25 from Arizona Summit, 2 from Cooley, 1 from Thomas Jefferson. The migration from Arizona Summit to North Dakota was perhaps one of the more bizarre events of the 2018 scam-year. Now more than a tenth of the entire student body at the U of North Dakota is freshly arrived from Arizona Summit. Presumably these Summitites hang around together and bitch about how much better things were at their former, effectively defunct law school. It must make for peculiar dynamics at that juridical Mecca of the Peace Garden State. Perhaps the U of North Dakota is preparing to scoop up the jetsam of Thomas Jefferson and other dying über-toilets.

Please share anything of interest that you discover in the 509 reports or elsewhere.