I've been writing about the illusion of "JD-Advantage" in particular for some time now.  The reasons why are essentially two-fold: (1) JD-Advantage is indeed farcical and plain-old bunk at an objective level, and (2) I have first-hand experience in the same, so that makes me somewhat of a subject-matter expert.  I've included a handy summary of posts on the subject over the years at the bottom should anyone need a cure for insomnia or delusions of grandeur, either one.

As we all know, a data set of one is not a data set.  So before everyone starts chiming in saying "but your experience is relative and not representative, because you are just one person, and forget about your dumb posts, anyway," here is some additional information in support of the Truth(tm):

There are a number of problems with the JD Advantage category as defined.  One is (or perhaps two are) its breadth and pliability.  They almost certainly cause some outcomes to be reported as JD Advantage that it would make no sense ex ante to attend law school to obtain (because there are much cheaper and easier ways to achieve the same result), and thus should not be considered placement successes (in my terminology, Law Jobs).  Worse, the definitional flexibility may inspire some administrators to stretch the category beyond any reasonable scope, rationalizing some “demonstrable advantage in either obtaining or performing the duties of the position,” in order to report an outcome they can claim as successful, especially in hard times.

Bam. Yessir, and a voice from the academy, no less.  But wait, there's more:

For example, is paralegal or law clerk (not for a judge, but as an unlicensed assistant for other lawyers) a JD Advantage position?  To be clear, there is nothing intrinsically wrong with these jobs; they are valuable, honest work, and skilled besides.  But you sure wouldn’t plan to spend 3 years and $150,000 in law school in order to get these jobs—in fact, you can get a paralegal certification in one year at many inexpensive community colleges, and you don’t even need that to get an entry-level job as a paralegal.  And yet the ABA’s 2019 Employment Protocols for the Class of 2019 provide that both paralegal and law clerk are presumed to be JD Advantage placements by dint of job title alone.  (See here at pp. 26, 67.)  In the same publication, the ABA says legal secretaries are presumed to hold a “Professional” rather than a JD Advantage position (here at p. 68), though (in my experience, at least) their work in many if not most cases is as highly skilled and law-related as paralegal work, especially at smaller firms.

Ah, the good ol' ABA, looking out for the little person.  Anyway:

(more below the fold):

Dozens of rich people and their collaborators have been arrested for fraudulent schemes to have already very privileged young people admitted to allegedly élite universities. Some parents bribed proctors of the SAT or the ACT so that a child could take the test with, shall we say, a little help. Others bribed coaches and others to pass their children off as recruited athletes deserving of extra attention and, of course, lower standards at the admissions office. Reportedly much of the money went through a charitable organization, and some of the people involved took tax deductions for their "donations".

I fully concur that the acts alleged are contemptible and that they should be punished aggressively. But does anyone really believe, as the prosecutor claimed, that "there can be no separate college-admissions system for the wealthy"? A separate system for the wealthy has existed for decades, and much of it is perfectly legal. Read Daniel Golden's book The Price of Admission: How America's Ruling Class Buys Its Way into Elite Colleges—And Who Gets Left outside the Gates. (Golden, incidentally, wrote the article cited above.)

Is Junior uncompetitive for Ivy? Call the "development" office and work out a donation, maybe a couple of million dollars, that may ever-so-coincidentally come to the attention of the people down the hall in admissions. As long as there is no formal quid pro quo, you should even be able to deduct the donation. Of course, this strategy works only if you have that much money and can afford to part with it—in other words, if you're filthy rich.

You may not have to go that far: your name may be enough. When it discovered that it had rejected a British princess, "horrified" Newcastle University back-pedaled and admitted her after all, blaming an "Italian" admissions officer for failing to consider that Her Disgrace "may have had more significance for the institution than another applicant"—than some poor slob like Old Guy, that is. US universities likewise fall all over themselves to welcome the scions of the rich and the prominent (usually one and the same).

If your own name doesn't command attention, you can have a well-placed person pull strings with the university. This ploy works especially well if you happen to be friends with the golfing partner of the university's president. Not many of us, however, can claim that distinction.

Or, if you yourself attended the university in question, or your spouse or another relative of your child's did, then your child counts as a "legacy" and gets special consideration. Again, this strategy doesn't work for people like Old Guy who are "legacies" of nothing in particular.

Those are just a few of the ways in which one can exercise direct influence over the admissions office. Indirect influence takes thousands of forms, many of them requiring money but all of them considered perfectly legitimate: aristocratic and expensive private schools, music lessons, élite sports (think polo and lacrosse—no competition here from the kid at East Bumblefuck High School), foreign travel, costly tutors for the SAT, even costlier "admissions consultants".

The tactics listed in the last few paragraphs may not strike you as fraudulent, unlike the purchasing of SAT scores or the bribing of the university's personnel. But they prove the existence of a "separate college-admissions system for the wealthy", one that takes up spaces that might otherwise go to lowly commoners.

The Legal Hiring Landscape Leaves Something to be Desired

Why do the scamblogs, who are already past their expiration date according to some critics, keep whining about job prospects for graduates and for the legal profession as a whole?  Why not just shut up, or something, already.

Well, thanks to an upcoming article, we have yet further information to explain why the scamblogs maintain their dogged insistance on the matter:

Why, then, you may well ask, is there persistent talk of the entry-level job market’s purported improvement, and even suggestions that it is “hot”?...Well, the percentage of new graduates obtaining a Law Job has risen steadily since 2011.  And how can the portion of the graduating class getting a Law Job increase while the number of Law Jobs falls?  Easy:  The number of students graduating law school has been falling faster than the number of Law Jobs.  Here’s a picture: 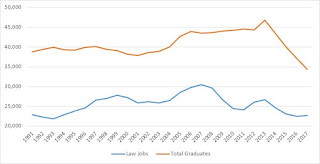 Look at the above chart.  When the scamblogs say that "JD graduates have been overproduced 2-to-1 compared to available jobs for decades," it is data such as this, hot off the presses, that we are referring to.  Granted, given this recent summary, perhaps we should amend our statement to say "Ok, overproduced anywhere from 1.4 to 1.8, given the year," but the thesis still holds.  When we speak of the "lawyer glut," this is it.  And when those who cherry-pick the data say "this is the best time to go!", the reality is exactly what the quote above describes - there are relative percentages, and then there are absolute numbers.  Not the same thing.

No employer sector offers more Law Jobs today than it did ten years ago.  Non-law-firm entry-level Law-Job hiring has remained relatively flat in all sectors (other than the sudden dip experienced by nearly every sector of the hiring market when the economy crashed in 2008-2009):

Again, look at the above chart.  The fact that non-law-firm hiring has been flat does not bode well for the JD-Advantage crowd, either.  Many, many times has the Cartel lauded and praised the opportunities for JD-Advantage jobs, and many, many times have we taken those claims down.  Into this flat market have excess JD graduates been pumped, year after year.  The market is clearly not crying out for JD-trained individuals.

Again, this looks very similar to the prior chart.  While some might say "oh, look, firms of 501 or more lawyers are on the upswing," but by what percentage?  Take a more critical look at the broad expanse as a whole.  These lines are not flying off the charts, are they?  They look rather flat in actuality.  The total job line, at the top, has the profile of a road with several potholes, not the long graceful upwards-curve of a suspension bridge to new heights.

Friends, this is why we say what we say.  I, for one, am greatful the Academy is publishing this information, as it needs to be made known, even though the implications are not good for the Cartel. Many of us would like nothing better than for the excesses of the past to be wiped away, and there to be Elysian Fields ahead.  But the reality is that the market does not need new JDs at the rate they have been produced.  Don't go to law school because it sounds good, only go if you have the backing and the credentials to get you there.  It's nothing personal, it is just the reality on the ground.  Too, too many have been sold a bill of goods to only learn the truth later, and we would all like to see that scenario go away in favor of gainfully employed JDs doing real work for real people.

In fact, just don't go.  The market still has yet to right-size, given prior comments from the Cartel itself. Now is not the time.
Posted by dupednontraditional at 10:56 44 comments: