Well, we are at the 97% mark on another fun-filled year of law school applications, and the year turned out more-or-less as expected.  While there was an initial burst of applicants early in the 2017 cycle, everything seemed to level out again to around 55,000 total applicants. 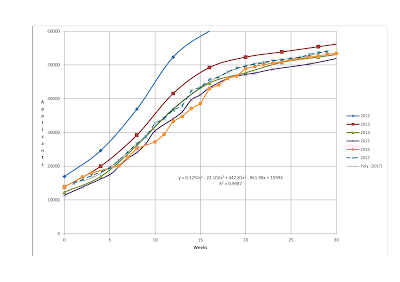 ﻿
For the sake of comparison, the applicant curve looks the most like 2014 as opposed to other years.  The "math error" described in the previous post on this subject continued to hold true, so while LSAC reports a decline of 0.5% applicants, we show that applicants went up 1.5%, and you can see it if you squint at the differences in the chart above. 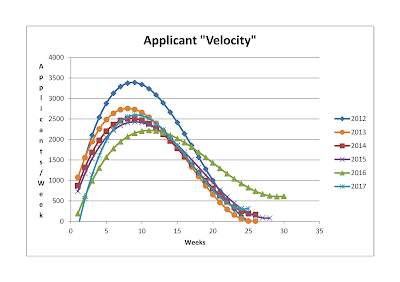 From a rate-of-change-of-applicants perspective, 2017 looked a lot like 2014 as well.  2016 continues to be an anomaly compared to past years, in that the applicant rate ramped up very slowly and then declined slowly late in cycle.  In contrast, 2017 was another quick ramp/quick decline in terms of applicant rate.  We still have yet to return to anything similar to 2012 levels, regardless.
All in all, applications have not bounced-back for five years now.  While there are still too many people applying to law school, the message appears to be taking hold and applicants are not coming in droves either, despite declining admission standards and efforts to increase the crop by the Cartel.  This is good news for the scamblog movement, so let's keep the message going!
Posted by dupednontraditional at 13:25 19 comments: 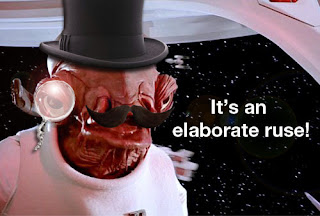 
The University of Maryland Francis King Carey School of Law now offers a Master of Science in Law aimed at non-lawyers.  The website states that the "degree [is] for professionals who want to know more about the intersection of law and regulation with the technical, scientific or administrative demands of their chosen fields."  The subject matter include Environmental Law, Health Care Law, and Patent Law...

The MSL is a degree in law for professionals who do not wish to practice law, but have a job where a knowledge of the law is useful.  For example, there are quasi-legal positions such as Contracting Officer for the U.S. Government where a background in the cognizant statutes and regulations would be beneficial.  The same could be said for those in the securities industry...this could be a way to counter the decline in law school enrollment, which is currently flat.

Here we go again.  The desire to render degrees of the of the not-JD-variety continues to proliferate, for the above-mentioned reasons:  law school enrollment has declined and remains flat currently, and a multitude of whiz-bang LT FT JD-required jobs continues to not appear.

So why fight it, reasons the Cartel.  Go with the flow.  The market has spoken, so respond in kind with an alternate product.

As I stated in my related post some three years ago, this "go to law school specifically for JD-Advantage reasons" is too little, too late for many who are already burdened with the smokin' bucketfull of awesome that is otherwise known as the Juris Doctor degree.  While the Law School Cartel keeps trying to say "no, really, the scambloggers don't know anything, Law School is still a really great idea," they are clearly hedging their bets by offering these "non-JD" degrees at the same time.  Interestingly, there is not a lot of evidence that these programs were in high-demand previously, when the higher-priced Cadillac JD degree was the only game in town.

One advantage, to be fair, is cost: the UM MSL degree is 30 credit hours at around $800 per hour - a mere $24,000.00 investment, possibly something one could do while working in their day job in environmental, health care, or patent matters (whatever that would be).  For those looking for a credential, who are already working in regulated fields, perhaps an employer could be persuaded to pay for an employee's further education.

At the end of all, however, one still has to question the value, even at a reduced price.  There is no practicing law with these degrees, although perhaps that was a pipe-dream anyway for many so who cares.  Would employers rather have a MSL candidate over a JD candidate?  Possibly - the MSL does not appear to come with "Scarlett Letters," as we have often stated the JD does not offer the flexibility/transferability that the Cartel would have one believe.  Are that many employers in regulated industries really looking for an "LLM-Light," however?  That remains to be seen, yet it seems unlikely - many folks learn on the job, and there are whole industry-specific businesses that cater to, train and educate those who work in said fields, not unlike the CLE classes we all know and love.

On a personal note:  I am sick to death of ADR.  I, in my JD-Advantage capacity, have been to enough mediations, arbitrations, and trials to know one thing - give me my trial.  Most disputes where ADR comes into play involve money, plain and simple.  You are not going to get people to agree by splitting the baby (when it's no one's actual baby in the first instance), which is what happens 95% of the time.  ADR is not helping me, it hinders me and wastes my time, and prevents me from asserting the claims and defenses I want to assert in favor of someone else's "judicial efficiency."  So stop it with all the ADR concentration-MSL-LLM mamby-pamby crap, and let's get back down to the business of actually trying cases.  Thank you.

One thing is for certain - whatever the Cartel tries to say, they are feeling the pinch of lack-of-demand.  JDs are not roaring back, schools are teetering, and another income stream is needed to help offset declining balance sheets.  The rise of the "MSL" indicates the decline of the JD, full stop.

The best bet for all concerned?  Avoid all this, in its entirety, unless someone else is paying for it.

Posted by dupednontraditional at 14:44 26 comments:

Indiana Tech, which I have styled the glorious Harvard on the Wabash, has made good on last October's promise to shut up shop in June:

The Web site is gone; links to it are redirected to the university's home page, presumably for the benefit of those whose erstwhile interest in a JD might become transmogrified into a thirst for a BS in Fashion Marketing & Management or a PhD in Global Leadership. Not one word is said about the plight of the jilted first- and second-year students, who have seen their barristerial fantasies dashed to bits against the porcelain of a toilet given its final flush.

Fortunately, however, Marilyn Odendahl took the initiative for the above-cited article to check such regional juridical behemoths as Toledo, Indiana University (both outlets of the franchise), Notre Dame (Indiana's fourth-tier trap school), Valpo, and of course Cooley. It turns out that all of these illustrious institutions are magnanimously collecting the jetsam of Indiana Tech, although at least one of the Global Leaders, unusually for a transfer student, will have to start the three-year program from scratch. I only wish that Ms. Odendahl had reported the number of centurions transferring to Harvard or Yale, as well as the number receiving free tuition in respect of the godlike excellence that they acquired at Indiana Tech.

How did the university honor its last graduating class? Not in the slightest. They got their degrees like everyone else but no other recognition, not even a mention of their status as the law school's final alumni. Indeed, only 5 of the 21 graduates even attended the ceremony; most or all of the others boycotted it so as not to have to confront the university's retiring president on the daïs. Apparently they had drunk the administrative Kool-Aid and believed that a mean official killed off their thriving gem of a law school. Instead, these worthies held their own ceremony at the Allen County Public Library (which, incidentally, houses one of the finest collections of genealogical information—something worth knowing the next time you pass through beautiful metropolitan Fort Wayne), where they paid homage to dean Charles Cercone and associate dean Charles MacLean. The twin Chucks richly deserved that inspiring accolade.

What will happen to the building erected specially for the law school? The university has not yet decided. It has, however, already sent workers in to measure the classrooms, although an examination of the blueprints should suffice. The fate of the curated art collection and the endowments for scholarships also remains unknown. As for the library's inventory, anyone wanting to bid on it should perhaps call Indiana Tech. This may be a rare opportunity to acquire rare volumes on the subject of Law & Hip-Hop.

And whither the distinguished faculty? What shall become of such superstars as André Douglas "Dougie Fresh" Pond Cummings, whose "reputation goes far beyond ... the nation, and is heard in every corner of the globe, wrestling with legacies of legal thinking on one hand and popular culture on the other"; Adam Lamparello, tell-all autobiographer and all-purpose tramp; and Aretha Green, noted for her refined palate (fried bologna with mayonnaise being her favorite delicacy), her sophisticated hobbies (snooping in houses), and her disdain for books? At the time of publication, I had not been able to verify the abundant rumors of deanships at the Sorbonne and sable-carpeted corner offices in New York's white-shoe law firms.

I'd like to conclude this eulogy with a musical tribute, written to the tune of "Back Home Again in Indiana". Pity that it's too late to hire Hoosier pride and joy Jim Nabors to intone it at a ceremony in honor of those valiant legal centurions with freshly issued JDs.

Back home again in Indiana,
Where it seems that I just saw
The Wabash Cannonball
Go to the wall:
Fort Wayne's toilet school of law.
Discordant strains of hip-hop echo
From the remnants of the wreck.
No more Global Leadership along the Wabash;
Turn the lights out at Indiana Tech.