...in fact, they appear to over-predict them!
What do you mean, I hear people say?  Well, the ABA just published first-time bar passage rates across all law schools in one handy document (for the first time, it appears).  For those of us that like to use data to make our arguments (e.g. scamblogs) instead of feel-good platitudes to make our arguments (*cough* *cough* Law School Cartel), it's certainly useful.
Recently highlighted were the 2017 first-time bar passage rates for the following schools:  University of DC, Florida Coastal, Whittier, TJSL, and Arizona Summit.  One can also go to the ABA to find the median LSAT scores for 2014 for these same schools - the class that approximately represents the 2017 bar passage data.  Also, we recently complied 600 data points correlating median LSAT scores with first-time bar passage rates from the 2010-2012 timeframe.
Comparing the results:

Overall, these schools did worse BY HALF than one would expect from the prediction.  Some items that could affect this outcome:  (1) by including "all" the bar-passage data to make a prediction, the prediction may skew high overall, (2)  the data used to make the prediction is approximately eight years old as of this date, so the prediction requires updating, (3) the prediction is too broad across all ABA-accredited law schools, and should be analyzed by groupings/rank/tier/something, (4) gremlins.
In any event, the actual results are not positive, at least where the students are concerned.  Whether the Cartel likes it or not, some sort of gate-keeping mechanism is necessary for the protection of both the profession and the individual.  Unless one merely views students as a resource to be consumed, of course.
Posted by dupednontraditional at 08:45 22 comments:

Another one bites the dust: Savannah Law School closing soon

Savannah Law School, a branch of John Marshall Law School in Atlanta, will close at the end of the semester.

The students, if I may so flatter them, of this über-toilet were informed two days ago. Already the building had been sold—apparently with possession to take place before the end of the semester, as the students will "be relocated to an unannounced location". I'm sure that the students appreciate this very late notice, scant weeks before their exams.

Savannah Law School now has to produce a "teach-out" plan to enable its current students to finish their Mickey Mouse JDs. Funny, I don't recall seeing any such plan from Indiana Tech or Whittier or Charlotte. Certainly none of those venerable institutions stayed open for two more years for the sake of the currently enrolled students. And Savannah Law School apparently has no such intentions either, since it has already sold its building. The "plan" may well be to have everyone transfer to the main campus in Atlanta, hours away.

In the meantime, Valparaiso is not admitting students, Cooley is in hot water with the ABA, and the two remaining InfiLaw toilets (Arizona Summit and Florida Coastal) have shrunk to a small fraction of their size at the heyday of the law-school scam. Expect more closures this year.

The AALS (Association of American Law Schools) publicizes a dubious claim that 3Ls contributed at least 81.8 million dollars worth of free legal services in 2017 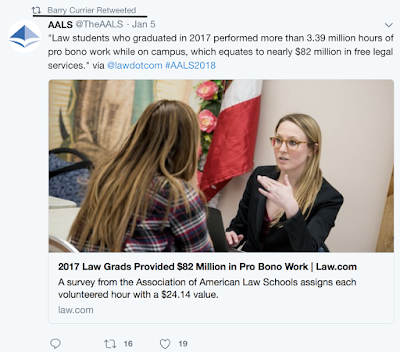 On January 3, 2018, The Association of American Law Schools issued a press release crowing that 3L law students of the Class of 2017 provided 81.8 million dollars worth of pro bono legal services, or actually considerably more.

"In November 2017, 94 law schools reported that 18,411 law students in the class of 2017 contributed more than 3.39 million hours in legal services as part of their legal education, an average of about 184 hours per student. Independent Sector, a nonprofit organization coalition, estimates the value of volunteer time to be $24.14 an hour. Using this number, the total value of the students' time. . . is estimated to be in excess of $81.8 million. . . Many schools indicated that some hours go uncounted or are difficult to track so actual contributions were probably higher. . . Law students contributed hours through a variety of efforts, including externships at legal aid and community organizations, law school clinics, and law student organization led projects . . . .Students received practical experience in law and communities received critical legal services."

AALS also posted a video of its Executive Director Judith Areen announcing this finding at the outfit's recent annual shindig in San Diego, to a round of spontaneous applause from the law profs in attendance. (Video at 11:10-12:16) Here, after all, was ego-bolstering evidence that law faculty are facilitators of tens or even hundreds of millions of dollars worth of "critical legal services." You know, as opposed to facilitators of a debt trap premised on scam, as many of their victims have cruelly asserted.

The website Law.com published a story based on the AALS press release, as did the publication National Jurist, and both stories were arguably even more laudatory than the original press release. AALS then tweeted a link to the Law.com story. This tweet got a retweet from Barry Currier, ABA Managing Director of Accreditation & Legal Education. (above) I may be oversensitive here, but isn't it slightly disconcerting when a chief regulator retweets self-congratulatory public relations from a trade and lobbying group representing the very institutions that he is supposed to be policing?

Due respect (or disrespect) to AALS and its flack-in-chief Judith Areen (who drew compensation of $518,859 for fiscal 2015, while refusing to pay her full-time law student intern a plug nickel), but I am dubious about her claim that 3L volunteer student labor equates to 81.8 million dollars worth of  legal services.

AALS's calculation is, as it notes, based on an estimate by Independent Sector ["IS"] that the value of an hour of nonspecialist volunteer time is $24.14 per hour. However, this estimate problematically derives from the average wage of non-management non-agricultural workers and is essentially propagandistic in nature.

IS is a nonprofit organization that exists to advocate for public policies on behalf of the charitable sector. IS acknowledges that the purpose of its estimate is to "show the immense value volunteers provide to an organization." Indeed, IS hopes that charitable organizations themselves "use the value of volunteer time for recognition events or communications to show the amount of community support an organization receives from its volunteers."

What is more, IS acknowledges that the estimate generally cannot be used on financial statements.("The general rule to follow when determining if contributed services meet the [accounting] criteria for financial forms is to determine whether the organization would have purchased the services if they had not been donated.")  Thus, IS's $24.14/hr. estimate of the value of volunteer time is more suitable for self-congratulatory social media posts and tweets than for budgets and balance sheets.

Is a law student intern or volunteer really contributing $24.14 per hour worth of labor? I mean, that sums to close to a $1,000 per week contribution for a full-time volunteer. Many public defenders do not earn $1,000 per week, despite being licensed to practice law, tasked with huge caseloads, and trained and experienced in trial and motion practice. So how is it possible that the work of a coffee-fetching or make-work-doing intern at that same public defender's office is valued more highly than the work of the public defender him or herself?

What is pro bono law student labor really worth to the lucky public interest organizations that receive this contribution? University of Georgia Law Professor Alex Scherr, a man with genuinely impressive credentials in experiential legal education,  did not mince words:

"You asked what the common consensus was among externship programs and field supervisors. I can't count the number of times I've heard externship supervisors say, "These students don't give me much. In fact, they are more trouble than they're worth if I'm thinking about it exclusively in terms of economic value. But I do it because I want to teach and I do it because I want to mentor."

I note that IS's $24.14/hr. estimate does not vary according to the educational achievements or specialized skill of the volunteer. Thus, by IS's measure, a law student doing volunteer work at a public interest law office is contributing no more to legal services than if the same work were to be done by a retiree, an undergraduate, or a high school student. Granted that 3.39 million hours is a lot, but theoretically you could get the same number of volunteer hours, and thus the same alleged 89.2 million dollar value, from the general population. Which means that law schools do not have to trap tens of thousands of kids per year in long-term debt slavery in order for legal aid organizations to receive the full benefits of volunteer labor.

Legal services organizations could also get an 89.2 million dollar boost if some vain member of the ultra-rich were persuaded to donate that amount in lieu of using the money to acquire naming rights to a law school. (Got that, Mr. Pritzker?) Something tells me that an 89.2 million cash donation would be considerably more welcome to legal services organizations and their clients than would 3.39 million hours of law student volunteer work.

But let's say that all of the above is incorrect, and that law school student volunteers have made a massive, valuable, and irreplaceable contribution to legal services organizations. If so, then congratulations to law schools. However, if there is to be a calculation of the collateral economic benefits to society of law school attendance (e.g. those 3.39 million hours of uncompensated student labor on behalf of legal services) should there not be a counterbalancing calculation of the collateral costs to society of law school attendance?

How much money is spent for health care, including mental health and substance abuse treatment, that is attributable, at least in in part, to the stress of staggering law school debt loads and stagnating opportunities in an oversatuturated profession? What is the loss to overall social stability when hundreds of thousands of law grads must tap their meager savings every month to cover near-extortionist interest rates on student loans rather than, say, using that money provide for their families, save for retirement, start businesses, or even make charitable donations to worthy legal services organization?

North Carolina Central University may be the first institution to impose a minimum LSAT score for admissions. Aspirants to this toilet school will now have to score 142 or better. In other words, the bottom 18% of the pool of test-takers just isn't good enough for North Carolina Central.

This departure from the institution's "holistic approach to admissions", according to scam-dean Phyliss Craig-Taylor, results from a "communication from the ABA" about violations of various standards. Faced with loss of accreditation, North Carolina Central had to adopt "new strategies and approaches … to be achieve [sic] student success".

Any minimum is better than none, but 142 is so dreadfully low as to lose its significance. If the threshold were set at a reasonable level, such as 160, North Carolina Central and most other law schools would cease to exist.