The notorious profit-grubbing InfiLaw chain of über-toilet law schools is in trouble. The sudden closure of the odious Charlotte School of Law a year ago left InfiLaw with only two toilets, hardly distinguishable in odor. One is Florida Coastal, which last year had to put its building up for rent because of financial woes (first-year enrollment declined from 808 in 2010 to 106 in 2017), threats to its accreditation, high rates of attrition (more than a fifth of those who enrolled in 2014 failed out), low rates of success on the bar exam (less than half of Florida Coast graduates who attempt it in Florida pass the first time), low rates of employment (more than a third of last year's graduates were unemployed ten months after graduation, and many others were precariously employed), and general InfiLaw-style shittiness.

The other, Arizona Summit, was stripped of its ABA accreditation last month. Its only chance of survival is an appeal filed a week ago. The appeal forestalls the inevitable for three months, but the scamsters of Arizona Summit understand that their toilet law school is in for a final glorious flush. Accordingly, Arizona Summit has asked Arizona State University to salvage the matriculated flotsam of the latest InfiLaw shipwreck: under the proposal being negotiated, students already enrolled at Arizona Summit would be able to take their remaining courses at Arizona State "to graduate and complete their degree at Arizona Summit".

Read that carefully: although Arizona Summit would have shut down, its last students would complete one, two, or even all three years of law school at Arizona State but collect a degree from long-defunct Arizona Summit! What's in it for Arizona State? Presumably several million dollars' worth of tuition (Arizona Summit has about a hundred students left in all classes combined), without the indignity of further tarnishing its already humdrum reputation by putting its name on the degrees of InfiLaw's dolts. Small wonder that a deal could be concluded in a week or so.

Let's imagine how this would play out. Fourth-tier Arizona State incorrectly considers itself prestigious: it declares itself "top-ranked" on its home page. But it undeniably stands worlds apart from seventh-tier commercial über-toilet Arizona Summit. It never would have admitted the nincompoops that people Arizona Summit, nor does it want to associate with them now. And any Summit trash that ended up in a class at State would stand out like a sore thumb. One can even anticipate the development of summit as a local pejorative epithet. So Arizona State would have to operate the remains of Arizona Summit separately. And since Arizona Summit is famously "diverse" (more than 40% of the students are non-white), the winding up of Arizona Summit would assume a decidedly "seg" appearance.

Conveniently enough, Arizona State could simply inherit any interest in lands, as well as enough otherwise unemployable professors to keep Summit at a slow boil for two or three years; it wouldn't have to saddle its own professors with the unenviable task of penetrating Summit skulls. After that, it might be able to redeploy Summit's erstwhile facilities for purposes other than a law school. And it could profit enough from the interregnum to justify the administrative inconvenience. After all, InfiLaw technically has to produce a "teach-out" plan whereby its students can finish their degrees—and InfiLaw certainly doesn't want to pour money down this über-toilet any longer than necessary, so it will gladly make the effort worth Arizona State's while. (InfiLaw presumably got away with shutting Charlotte down summarily, without a "teach-out" plan or even notice to the students, because the state yanked Charlotte's license. If the ABA instead yanks accreditation, InfiLaw should be on the hook for the "teach-out" plan, although I wouldn't fancy the ABA's chances of enforcing the obligation.)

As a bonus, Arizona Summit may retain students—it expects to lose 30–40% to transfers by the end of the summer—through this coup de grâce, because some may regard themselves as being springboarded into the faux-prestigious ranks of Arizona State. Who knows? Some may even frame their "education" cagily on their résumés, so as to mislead potential employers: "Finished JD at Arizona State University, 2021." Like many swords, this one cuts both ways.

If this ploy succeeds, as it must, we may see it repeated on a grander scale. Imagine Harvard's managing the dregs of the New England School of Law, just to get its paws on some prime Bostonian real estate.

Predictably, the namby-pamby scam-enabler known as the ABA has backed down from its perfunctory challenge to North Carolina Central University's law school, finding that "the concrete steps taken by the Law School with respect to its admissions policy and practices" show compliance with the ABA's so-called standards.

Apparently the ABA, in its "critical review" of über-toilet North Carolina Central, smiled upon a "corrective action plan" allegedly aimed to address such failures as low rates of passing the bar exam, high attrition (38% of last year's first-year students either dropped out or failed out), and a Cooleyite student body. According to the article cited above:

The corrective action plan includes tighter admissions standards. All incoming students must post an LSAT of at least 142 and a grade point average of at least 2.96. Recent graduates were provided with bar preparation classes, and incoming students will be given online resources, tutorials, academic coaches and will be required to meet with academic advisers to make sure they stay on track.

A minimum LSAT score of 142, which is below the 18th percentile, hardly represents a standard at all; rather, it shows a basic inability to read and think at the level that should be expected of a lawyer. While "academic advisers" and such may help to push North Carolina Central's dolts through to graduation, they won't be able to correct major deficiencies in essential skills. Perhaps two or three years of intensive study would prepare them for law school, but that's not on the cards at North Carolina Central or anywhere else.

North Carolina Central must have strict standards of skill (not to mention size, gender, and age) for its undergraduate football team, and Old Guy wouldn't come close to qualifying. Yet for its law school it cheerfully throws meaningful standards out the window. Cherchez l'erreur.

As a historically Black institution, North Carolina Central has done much to right the wrongs of racism and afford opportunities to people who could not have had them in white-dominated universities. (Nearby Duke didn't have a Black law student until 1961, nor a Black female law student until 1974.) Today, however, the opportunities that they afford in the legal profession are merely illusory. People of whatever color who can't attain the high 150s on the LSAT don't belong in law school: even if they graduate and pass the bar exams, they're unlikely to find work that pays enough to cover their student loans.

Well, here we are at the end of another exciting application cycle.  The model predictions made around week 22 continued to hold strong, almost like clockwork.  With 98% of precincts reporting in, it appears that there will be slightly over 60,000 applicants for 2017-2018,  a 6% increase over last year. 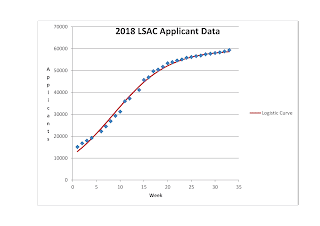 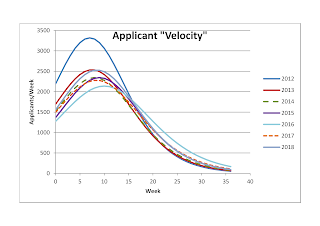 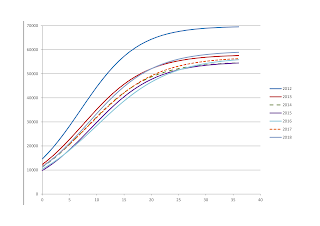 Whether the increase is 6%, 8%, or 25%, any increase outside the noise range is that many law students too many.  One has to ask why applications are essentially back to 2013 levels this year.  Some say it is the Trump-bump, which could be.  My personal opinion is that we have a whole new cadre applying who have not seen the horror stories, or paid that much attention to the ones they did see.  Perhaps snowflake-syndrome still runs strong.

However, all is not well in cartel-land.  While the clinking of champagne glasses most likely continues unabated, there is one nagging doubt that remains.  Has the low-hanging fruit actually been plucked?  According to BusinessWire:

Key Findings
So, outside of gunners and snowflakes, who have already made up their minds prior to considering alternate data, perhaps the message is sinking in for those who are not already pot-commited.  One can only hope.


Posted by dupednontraditional at 06:19 23 comments: