California Western School of Law is going to the dogs. 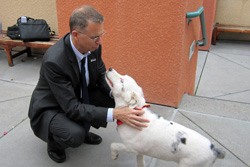 The dogs don't care that California has had a severe and recurring budget crisis for several years,  so that the chances of a recent law grad obtaining a state public sector job remain worse there than elsewhere, which is saying a lot. Indeed, out of the 568 total members of California Western's graduating classes of 2011 and 2012, a mere 33 obtained a full-time judicial clerkship (at any level)  or a full-time government job within nine months of graduation. [3]