One of the dirty not-so-secrets of the law school business model is the conditional scholarship game.  Every year, "desirable" applicants (relative to the law school they are applying to, for example, a student with a 160 is desirable enough for a lower-tier school to shell out serious bucks, while such a student would be looked at as a federal loan trophy at a different school) are given incentives to attend a certain law school.

Students with above median LSAT/GPA for the law school are often given conditional "scholarships" in return for their attendance (as opposed to "guaranteed" or scholarships requiring only good standing), that is to say that if they maintain a certain GPA or class rank percentage (which are essentially the same thing, depending on where the school sets their curve), they get to keep their scholarship. For example, as a naive 0L, two schools offered me scholarships: one said I had to retain a 3.0, one said that I had to be in the top-third of my class.  I thought it would be easier to maintain a 3.0, so that factored into my decision to attend that law school, even though only about a third of students at that law school are given 3.0's or above.


A couple years ago the New York Times had a great article that outlined how the students who lose their scholarship after their first year still pay dividends to the law school, through their higher rate of bar passage rates and their increased tuition revenue that they provided the school after losing their scholarships.

In response to the outcry prompted by articles like the one from the NYT, the calls for greater transparency, and the criticisms of law school's misleading employment statistics, the ABA did something right with their new Standard 509.  As of this year, law schools must publish "complete, accurate, and not-misleading" information regarding the employment prospects of their graduates, bar passage rates and the like, and scholarship retention rates of their students (however, the ABA conveniently omits the requirement for salary data).

Because of Standard 509, aggregate reports of how many students lose their scholarships are now available.  According to TaxProf Blog (via National Jurist), 69% of law students kept their conditional scholarships.  Prominently displayed on the page are the schools with the worse retention rates: 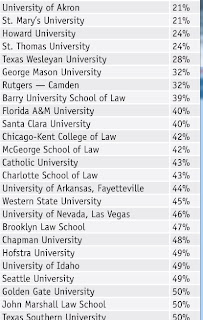 Because of Section 509, it is easier to see the bait and switch.  Before, it was only people who knew how grade distributions in law schools were set up and how conditional scholarships synergized with them.  Due to that, most of the people onto the bait and switch were either current/former law students or hyper-informed prospective law students who frequent websites such as Top-Law-Schools.

At least now schools have to publish their numbers.  But how hard is it to find the raw data that prospective students need to see on scholarship retention?  Let's look at University of Akron, which tied for having the lowest retention rate of conditional scholarships in the country.

Finding the information at the University of Akron, one of the nine law schools in the economically stagnant state of Ohio, was actually surprisingly easy for me.  Perhaps it is because I know the "code words," but I'll let you judge.  You go to their website: click on "Prospective Students," and click on "Important Consumer Information."

From there all you have to do is click on "Scholarship Retention Data," where the damning information showing that of 113 people in 2011 who came in with scholarships, 89 had their scholarship reduced or removed.  Helpfully, the law school notes that "No. Students Whose Conditional Scholarships Have Since Been Reduced or Eliminated" figure in the rightmost column does not include students who met the renewal criteria of our conditional scholarship but chose not to continue their legal studies."

Even more helpfully, however, is the information showing the breakdown of the conditional scholarship retention rate: 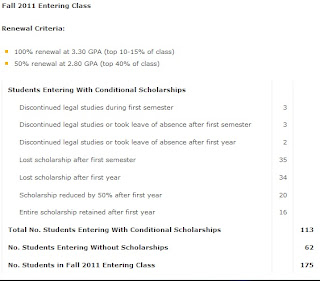 While I am not going to "break" any big news about Akron's strategy with their conditional scholarship program (like the fantastic reporting done on the University of Illinois' fall-man and his wife a couple weeks ago), this makes me curious on who they are actually giving scholarships to.  Full-time LSAT/GPA medians for 2011 are 157/3.63, 155/3.32, and 152/3.12.  Akron isn't scraping quite the bottom of the barrel like other Midwestern diploma mills are.

As I stated above, most law schools give scholarships to students who have LSAT and GPA above the medians.  GPA and LSAT scores are correlated to class rank.  In the video below, scroll to 15 minutes and note how the Professor Johnson shows the correlation between LSAT and class rank at law schools (the video itself could be an entire blog post or multiple blog posts, but for the purposes here it is to highlight how high performance on LSAT/GPA relative to peers increases your chances of being in the upper ranks for law school, at least if you have a decently higher LSAT than the median.  For reference, my LSAT is about 10 points higher than the median at my school, and a friend who has a similar scholarship is also 10 points above).

That is enough for me for now, enjoy the rest of your Sunday.

UPDATE: I was being lazy and did not read Akron's numbers close enough.  The reason their retention rate is so ridiculously low is because they only give full renewal to people who score in the top 10-15% of the class.  I foolishly assumed that this school would do the typical top third cutoff point.  Instead they stack the odds incredibly against the students on conditional scholarships.