CommonBond is about as different from a typical Sallie Mae private college loan as Indiana Tech Law School is from any other bottom tier diploma mill.  Identical, in other words, despite CommonBond's assertions (and shITLS's assertions) that they are something new and revolutionary, they are just the same old problems wrapped up in a new website.

The basic story at CommonBond is that some finance types saw an opportunity to invest in private student loans.  After all, why should Sallie Mae have all the profit?  So the prestigious folks at CommonBond went to their prestigious alumni at their prestigious schools and said, "Hey guys, you want in on this racket?  Lend money to students at top business schools at rates that are only a fraction better than the government, but with none of the perks of government loans, and you can profit from this rock steady investment."

CommonBond lends money (right now) only to MBA students at the top business schools, and it's not a bad idea.  Those students are most likely to get the top jobs and repay their loans.  Forget all the idiots at the diploma mill MBA schools - they can stick with their government loans.  (Although I think that CommonBond has missed the true core of profiting from student loans, which is making it as easy as possible to allow student defaults, generating fees, penalties, and all manner of other increases to loan balances.  Sallie Mae has got this down to a fine art.)

The idea is sold on prestige.  The web site oozes prestige, basically telling students, "Hey, you're better than relying on a government program, which sounds a bit like food stamps or some other welfare.  We offer a super exclusive, super prestigious opportunity to show everyone how prestigious you are by borrowing from us, a prestigious and exclusive lender that only lends to the most prestigious students ever.  So what'll it be?  Food stamps, or filet mignon?"

Yet looking under the cover, the loans from CommonBond are a bad dead. 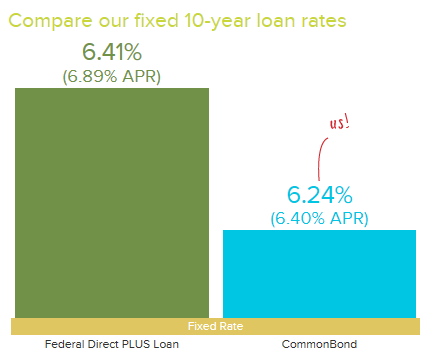 Looks good, right?  From that graphic, you might assume that CommonBond's rates are what, about forty percent of the government rates?  How deceptive!  Here's the chart as it should be shown (lots of scrolling required, and I had to reduce the scale to make it fit):

Yes, by showing only the tip top of the chart, CommonBond is telling a massive lie right off the bat.  Their rates are only slightly lower - a fraction, in fact.  Not the sixty percent discount that its graphic implies.

So how do they get their rates low?  Well, you give some stuff up over the regular government loans, like access to Income Based Repayment and Public Service Loan Forgiveness.  Aren't sure that you'll graduate into that high dollar job with McKinsey, and you might be working for you local supermarket chain?  With CommonBond's loan, you'll be paying it back in full, rather than being able to use the IBR program offered by the feds to protect those with high debt and low incomes.  Want to work for your local government or in a federal job?  Again, with CommonBond's loan, you're out of luck when it comes to public service forgiveness.  In essence, with CommonBond, you're taking a gamble - you're betting that for a miniscule interest rate benefit, that you'll be sure to have a high-paying job that lasts at least a decade or longer, however long it takes to pay the loans off.  Need extended repayment plans?  Out of luck with CommonBond, which makes you pay it all off in ten years.

Sound familiar?  Law schools being so expensive, and countless students trapped when the jobs of their dreams didn't appear and they were saddled with massive debt?  But of course, that would never happen to those prestigious MBA students at such prestigious schools, right?

Not content with the vomit-inducing borrower profiles (like Grace, who was president of the Wharton Food Club, or Andrew, who was Captain of the Cross Country Club, or Dan, whose post-MBA life is merely "New York City!"), few of whom actually stand out as anything particularly successful or interesting, CommonBond tries additional tricks to get borrowers through the door.  Their "Social Promise" section states that for each fully-funded MBA degree, they'll donate a year of schooling to a kid in Africa.  Sounds good, but it's a gimmick.  A year of said schooling through the African School for Excellence (which is the institution CommonBond supports) costs a mere $600.

How much is $600 compared to the interest CommonBond will be reaping from its borrowers?  Let's take a look.  A year of tuition and fees and incidental living expenses at a top business school is around $80K per year as a conservative estimate.  So a $160K loan from CommonBond over two years.  According to CommonBond's own calculator, the total repayments will be $241K, over $80K more than was borrowed.

So CommonBond's "social promise" is to return a mere 0.75% of its interest income to social issues.  Wow.  How generous.  (Of course, it's better than nothing, and I'm all for supporting programs like ASE, but it's clear that CommonBond is not interested in supporting social issues - they are interested in using social issues as a means to show what a harmless, helpful, benevolent PRIVATE STUDENT LENDER they are.  Rather like President Assad of Syria comparing himself to Saddam Hussein and saying, "Look how nice I am!")

CommonBond, if you want to make a difference, then make a BETTER private student loan, not just ANOTHER private student loan.  Invest in your borrowers by allowing your loans to be discharged in bankruptcy if the student fails after five years.  I'm sure many would happily pay a higher interest rate for the privilege.  Invest in struggling students here in the US, the ignored millions who go to elementary school hungry each day, and invest more than $600.  Stop commoditizing borrowers, stop profiting from the higher education system (which is rotting away because it's now seen as a business, not a social good.)

CommonBond is a private student lender.  It suffers from the same issues all private student lenders do, no matter how hard it tries to differentiate itself from the predatory debt traps like Sallie Mae and Access Group.  It's just another way for private individuals to make a buck, wrapped up in as many misconceptions and half-truths as it's allowed to get away with in order to hide what it's really all about.  Just like law schools are now exposed as being.  And just like MBA programs are.  Cost of attendance at $80K or more per year?  That screams "scam".

Here's the most informative quote from CommonBond, tucked away on its website: "CommonBond affords access to an entirely new asset class that is historically low risk."  There you have it, students and borrowers.  That's how you're seen by student loan lenders.  An "asset class", not individuals.  An investment opportunity, not a human being trying to get a foothold on the middle class.

1.  Borrow as little as possible.
2.  Borrow it from the government if you have to, and never from private lenders.

Note that 1 and 2 can be very easily accomplished by just not attending law school or an MBA program in the first place.
Posted by Outside The Law School Scam at 01:00