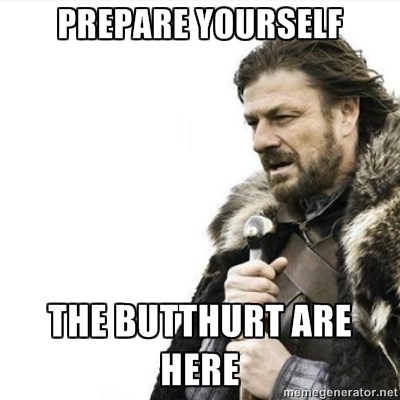 As the facade continues to crumble on the Law School brand, I find it quite comical how various LawProfs have become increasingly bitter, snippy, and downright angry about people questioning the value of a law degree.

To a certain extent, it is understandable.  No group likes to have another group trash them wholesale for who they are.  Lawyers understand this more than most - who hasn't been (not-so-jokingly) reviled as a "shark", a "bottom-feeder", an "obstructionist", or a generalized "a-hole"?   I'm used to people acting that way towards me, once they find out I am a lawyer.  It's not pleasant, but I know that many people have had bad experiences with lawyers, whether deserved or undeserved.  I get that.  Sometimes I counter the argument by saying that lawyers have the unique (and sometime unpleasant) task of being an advocate for one side, and in any conflict is is natural to feel some vitriol towards the side that you perceive to be impeding your progress.  But that's the way it goes.  I don't feel the need to defend myself to the millions of people who think lawyers are "bad people" - it isn't worth the effort, there is a lot of grey between the extremes of black and white, and few minds will be changed in any event.

Not so with LawProfs.  I would have said this was due to the fact that they are concerned about their pocketbook, and to a certain extent I'm sure they are.  However, when you look at LawProf CVs (and trust me, reading one after the other makes for a natural substitute for caster oil, in case you ever need to purge), one thing is clear - these are not exactly rags-to-riches people.  They largely come from big-name schools.  Have big-name pedigrees.  Have done some big-name stuff.  Stuff that the vast majority never even come close to touching or having access to.

In essence, they largely come from money and influence.  How could it be otherwise?  Who can afford to do what they have done?  How else could they garner the plumb assignments they have had prior to becoming a professor?  Bootstrapping and sacrifice?  Don't make me laugh.

As such, this is not really about LawProfs losing their livelihood.  While that might sting a bit, they have other resources to fall back on by virtue of the segment of society they come from.

This is really about pride.  And pride goeth before a fall, as some ancient wisdom has said.

LawProfs did what they did because the like the position in society they occupy.  They enjoy being looked up to and respected.  They enjoy hearing themselves talk (clearly).  They want to be revered by their peers and colleagues, so they hob-nob at high-dollar colloquia and write love-letters (i.e. legal scholarship) to each other in order to garner influence.  They wanted to be admired by legions of law students who were eager to join the "majesty" of the profession they claim to occupy.  And let's be honest: the job was a sweet deal - in comparison, you have to lay a lot of bricks and hang a lot of drywall in order to make $200k a year, and the hours aren't nearly as good.

But, as the tarnish has spread and lives have been reduced to debt-serfdom, the LawProfs just aren't getting that ego-stroke they way they were accustomed to.  Deans and administrators are talking more and more about "little-people" stuff, like budgets and increased work loads.  People are demanding more accountability and work product that justifies their role, not just their pet project of the semester.  And that causes the LawProfs to have a sad.  Even from LawProfs who are in no danger of losing their jobs due to the size of the foundation that supports the school or parent university (i.e. status and preftige).

Why did this happen?  Is it solely because times are tough for "lazy", "bitter", "entitled" graduates, and students need a convenient scapegoat for their "failure"?  If only it were that simple - at least that would imply that things are actually better for everyone, student and LawProf alike.  Student frustration over having to "settle" for their second or third choices would actually be a welcome outcome, as opposed to current joblessness and crushing debt for thousands upon thousands.

No, I would argue that the ire towards LawProfs comes from the fact that for decades, they Just Didn't Care.  Period.  And why should they, when they were in no danger of facing the kind of circumstances their students faced?  I'm sure there is a LawProf or two out there who tried to help their students, put in a word for them where they could, so let good karma fall where it will.  But as a profession, they were too busy being complicit in the scam, looking the other way, pretending that thousands of lives weren't being destroyed while they wrote yet another "Law and _____" article or attended another circle-jerk symposium for $100-200k a year and a six-hour-a-week teaching load.

One thing is for certain.  As the situation continues to sour, and as fewer and fewer law students attend, watch the Pride sail into the stratosphere as LawProfs are increasingly required to do what most people do for their livelihood - work.  Inside the bubble, no less.  And instead of regarding their own contributions to the situation with sober judgment (with rare exception), these butthurt LawProfs are blame-shifting and looking in all the wrong places for respect and sympathy.  They did everything right...!  Didn't they...?

Nope, there's no Sympathy for the Devil here.  In short, welcome to how the other-half live.  Enjoy your stay.
Posted by dupednontraditional at 06:30