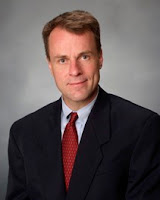 (Jeff Kinsler: The man who persuaded the ABA to accredit Belmont, Elon, and Appalachian).
The ABA has just granted provisional accreditation to Belmont University School of Law in Nashville, Tennessee. The school did not admit its first class until 2011, and now, a mere two years later, it has joined the ABA's anointed. Here is a smattering of links, facts, and quotes from Belmont honchos. I guess what ties it all together is the following lesson for all would be scammers: It really helps to be, or to employ, a telegenic detail-oriented person with a flair for sounding sincere, confident, and idealistic while spouting baloney. In other words, a Jeff Kinsler.

I. Let Jeff Kinsler Quarterback Your Scam into the End Zone!


According to the Nashville Business Journal, Kinsler has been instrumental in obtaining accreditation for two other law school--Appalachian (where he served as Dean from 2005-2007) and Elon University (where he was a Professor of Law and Senior Scholar from 2007 to 2009, and where his salary was $221,800, h/t Third Tier Reality). And now Kinsler has completed an unprecedented trifecta of scam by obtaining accreditation for Belmont, which picked him as its charter Dean in 2009.

II. Belmont Honchos Say: There is Desperate Need for More Attorneys in Tennessee.
a.  Belmont University Provost Dr. Thomas Burns stated that "Whether the overall national picture has changed, the local picture hasn’t. . . There still is a substantial need as our research indicated for lawyers or legally trained professionals in Middle Tennessee or this region." Similarly, Kinsler asserted that "There’s a big gap in the market here; there’s no question." Kinsler added that the time for a new law school was not just right, it was "overright."
However, using data obtained from Bureau of Labor Statistics (BLS), a firm called Economic Modeling Specialists (EMS) projected 389 annual law job openings in Tennessee through 2015. (See "The Lawyer Surplus, State by State," NYT, 6/27/2011). Seemingly exceeding the demand for 389 jobs, the three (other) accredited law schools in Tennessee (two of which are in middle Tennessee) graduated 485 new JDs in 2012 (Vanderbilt: 196, University of Memphis: 134, University of Tennessee: 154). And a lot more JDs educated elsewhere, or at non-ABA but locally accredited schools, take the Tennessee bar. Indeed, 676 passed the Tennessee bar in 2012. Now, if 676 newly licensed attorneys were somehow insufficient to fill 389 in-state lawyer job openings, couldn’t the existing schools simply increase the size of their classes?


b. Here is a good post from Above the Law from 2010, though ultimately misplaced in its optimism. The post is entitled "Someone at the ABA is Aware that New Law Schools Make No Sense," and it quotes a choice bit of scamming nonsense from Kinsler. Kinsler noted that the BLS projected a certain employment growth rate for lawyers from 2008-2018. He then blithely asserted, based on the fact that there was almost no growth in legal employment from 2008-2010, that "Statistics must be assuming that most of [the]...growth will occur between 2011-2018." Another possibility-- that no growth for the first two years of the 10 year projection meant that BLS had overestimated job growth --was confirmed by BLS's subsequent projection of lawyer job openings for 2010-2020, which reflected a significant downward revision from the projection it offered for 2008-2018. Kinsler was criticized for his remark in the ABA Journal, but it did not matter in the end.
III. Belmont  Law is Serious About Ethics (Never Mind its Own Scamming Hype or the Torture-Enthusiast Teaching Constitutional Law).

a. Kinsler asserted that other law schools display "an inadequate concern for ethics, professionalism, and integrity,"  but that Belmont would "tackle. . . head on" these deficiencies by requiring students "to take an ethics or professionalism course each year." (video at 1:04-1:12, 1:43-1:47) In the same vein, Belmont University President Dr. Bob Fisher, stated that "Given the public role of many legal professionals, we believe a vital element of the Belmont Law education will be preparing our students for roles as community leaders and change agents."

b.  On the video linked below, Fisher (whose salary in fiscal 2010 was $862,686), yaps about how Belmont Law will facilitate nobility, justice, fairness, ethics, and self-criticism:

"You know I think law schools and people who become attorneys and judges are so critical to our democracy. We want to be a part of that, of the noble side of the law. We want to have justice and fairness and we think that our commitment as a place. . . that is a Christian University where ethical standards are a big part of what we examine ourselves on all the time, where we strive to do the right thing, and when we don’t we call ourselves on it and say...that’s not who we want to be. We think that kind of environment for attorneys to be. . . will be a wonderful thing."


My own view: I do not think even an academic's extraordinary ability to deceive him or herself extends this far. Fisher is not clueless at all about the likely fate of kids who attend Belmont Law or about the windfall that he anticipates that the law school will bring to himself and the rest of his crappy University. In Fisher's pious blather, I detect the smug and contemptuous cynicism of a Madoff becoming teary-eyed over orphans and sick kittens.


c. Belmont Law's big celebrity hire was Alberto Gonzales, White House counsel from 2001-2005 and Attorney General from 2005-2007. Gonzales made himself notorious by "redefining" torture and by deeming provisions in the Geneva Convention to be "quaint" and "obsolete," apparently over the objections of military lawyers. Gonzales also made himself an international laughingstock in April 2007, when he testified in the Senate about his mass firing of US Attorneys. Gonzales used phrases like "I don't recall," or "I don't recall remembering," no less than 64 times during the hearing, causing disgust even among conservative Republican allies of the Bush Administration. According to this post by Prof. Jonathan Turley, no law firm or ranking law school would hire Gonzales, such was his reputation. Even a number of Belmont (nonlaw) professors signed a letter of protest.

d.  On January 20, 2012, the National Lawyers Guild, Tennessee Chapter, staged a small protest against Gonzales in front of the main entrance to Belmont University. The student newspaper, the Belmont Vision, relates that: "During, the protest, the demonstrators were photographed by Dr. Jeff Kinsler, the dean of the Belmont College of Law. He declined to comment officially. . .but a Vision reporter overheard Kinsler later calling the group of "a bunch of aging hippies."" It surprises me that the Dean, no less, photographed and insulted the demonstrators, rather than leaving such unpleasantness to security. Is this smooth-talker so easily rattled by, uh, insolence? Or maybe, at heart, he is just an aging narc.
IV. Belmont v. Nashville School of Law: An Instructive Comparison.


Assuming arguendo, and against all evidence and logic, that Tennessee faces an incipient shortage of lawyers necessitating a new ABA-approved law school--why choose Belmont over Nashville School of Law? The latter, unlike Belmont Law, has actually has been around for 100 years. An article by David Segal in the New York Times, part of his great series on the scam, states that Nashville Law's graduates get high marks from local judges. ("For Law Schools, A Price to Play the A.B.A. Way," 12/17/2011).
Well, the thing is-- Nashville School of Law charges $5,000 per year and its professors are untenured and part-time. ("[T]uition costs $21,000 — in total, for all four years it takes to complete the degree. The reasons? Nobody has tenure. There are no full-time professors. The library costs $65,000 a year"). Thus, Nashville Law’s model not only defies ABA standards, it threatens the existing model of legal education with the awful specter of a realistic low-cost alternate model, one that does not involve law professors getting rich.

Oh, Belmont Law’s tuition? $34,800/yr. Yes, about double the resident tuition at the University of Tennessee School of Law. Belmont is also surprisingly stingy in awarding scholarships, perhaps on grounds that it cannot routinely discount the price of its educational wares and pay its fabulous President his $862,286 annual due.

V. All the Brain Dead Moguls, Where do They All Come From?


The law school is housed in a new building called the Randall and Sadie Baskin Center, named after the elderly retired insurance mogul (and his wife) who gave Belmont a seven million dollar donation to fund its construction. I am constantly amazed that aged philanthropists, seeking their legacies as well as big tax deductions, give money to law schools. It doesn't take much imagination to think of the good that seven million dollars could have done elsewhere; indeed, could have done in providing legal services to people in need who do not qualify for legal aid.