A Treasury of Idiotic Quotes About Legal Education, Vol. 5: Elon Law Dean Luke Bierman explains why "it may actually be a wonderful time to go to law school." 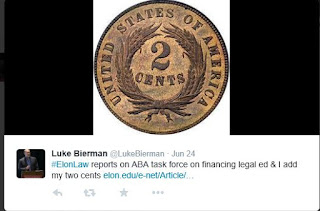 (Adding his two cents...or his nonsense?)
Law school deans, including those from truly bottom-feeding law schools,  typically draw enormous compensation and perks galore. One minor, though likely very gratifying, perk is that a law dean is listened to, and even taken seriously, when he or she spouts banalities about change, the future, and values.

Why do law deans so often speak and write like clueless gasbags even though, whatever one thinks of their behavior, they are obviously highly sophisticated executives? It is because theirs is a stupidity with a purpose-- for instance, to evade or shift responsibility, to sound profound or leaderly, or just to serve their scamming institutions via some good old-fashioned hustling--and their rhetoric and prescriptions may reflect these insufficiently-concealed motives.
Consider the following quote from Elon Law School Dean Luke Bierman, explaining why it "may actually be a wonderful time to go to law school." This quote comes from Bierman’s two-paragraph-long concurring statement to the 62-page report ("Report") that was recently issued by the American Bar Association's Task Force on Financing Legal Education:

"Law schools can’t fulfill their missions and be successful without students. And students are not going to matriculate to law school if the legal profession does not provide opportunity for a meaningful career. The academics, practitioners and judges who comprise the legal profession must recognize and embrace that we are passing through a moment in time defined by rapidly changing social, cultural and economic norms that present challenges to the continued vitality if not relevance of our profession. The pace of technological innovation alone creates legal uncertainties and controversies that we barely can distinguish let alone solve in real time. Our profession must honestly and creatively embrace the challenges attendant this transformative moment to identify and preserve values core to our role in society as the shepherds of the rule of law while concomitantly adapting to a new era. From this perspective, it may actually be a wonderful time to go to law school and join a generation that must forge new paths and new opportunities. It remains, then, for our profession to accomplish this reset in a forthright and productive manner, which will do more to help law schools than any prescriptions by any task force anywhere."

You would think that a Ph.D and former general counsel to the New York State comptroller could do better than that after several months of meta-deliberations about law school costs, which included consultation with 13 fellow ABA Task Force honchos, testimony and written comments from experts and stakeholders, access to information from the ABA that is not publicly available, and staff and research support from the ABA.  But, of course, Bierman's is a stupidity with a purpose.


Is Bierman saying anything of substance here? What is left, if anything, once you subtract the sententious guff about paths of opportunity, moments of transformation, and--my favorite--"shepherds of the rule of law"? What Bierman is saying (or, rather, what I think he is saying, it is written in Deanspeak) is simply that the practicing bar should hire more recent law grads (i.e. "provide opportunity for a meaningful career. . ."). You know, to show its adaptive relevance and vindicate the noble mission of law schools. But what if the practicing bar fails, nonetheless, to heed Bierman’s inspirational call? Well, in that case, you can hardly blame him, or any law school dean, for anything worse than being overly idealistic about lawyers.
Elon Law has indicated that it intends to expand the size of its entering class by 15%, which a non-clueless observer would have to regard as an extremely irresponsible move, especially for a law school that already has a notably awful placement record and a 148 median LSAT (which is down, by the way, from 153 only three years ago). But a law school Dean or a clueless gasbag could say that Elon is simply giving more kids a wonderful chance to join their generation in forging new opportunity paths.
Here is my free-form translation of Bierman’s quoted statement. I invite readers to provide their own translations in the comment thread.

Predators can't fulfill their missions and be successful without prey. And the supply of prey is threatened when shepherds fail to cooperate with predators. As practitioners of a shepherding profession, we must embrace our responsibilities to the flock of recent law grads by heeding their plaintive bleats for meaningful sustenance. The vitality and relevance of shepherds have been celebrated for millennia, and yet the simple shepherds of yore lacked today’s transformative technologies to assist them in forging new paths to rich pastures of opportunity. From this perspective, it may actually be a wonderful time to go to law school and join a generation of sheep. It remains, then, for shepherds to accomplish a productive reset, which will be more helpful to predators than any Task Force of Wolves. No need to marvel at my eloquence, just pass me another enormous helping of lamb chops.