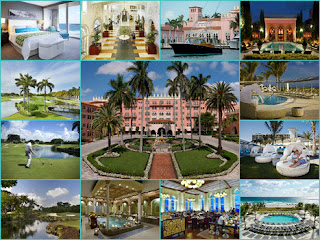 Did you know that Chief Justice John Roberts once explained his conception of judicial restraint with a baseball metaphor, saying that his job was to call balls and strikes, not to pitch or bat? Any educated American with an interest in history and government could probably come up with his or her own scorecard of reasons why that analogy may be apt, and some competing reasons why it may be evasive or historically dubious.
But an enlightened academy does not leave such important contemplation to minor league thinkers. Rather, it flies a whole bunch of professional law faculty to a luxury resort in Florida where they can flex their intellectual muscles for a couple of hours by batting around their various insights about Roberts’ comment and fielding each other’s questions about "how courts and commentators use baseball to explain a range of concepts."

Afterwards, these academic foul balls-- sorry, I mean best athletes-- can join several hundred faculty teammates in their well-appointed scholarly dugout, the Waldorf Astoria Boca Raton Resort and Club, for a week-long scampionship celebration, featuring swanky receptions, sponsored golf and tennis tournaments, boozing, shmoozing, pampering, and carefree fun in the sun.
Yes, it is time for the annual SEALS (Southeastern Association of Law Schools) extravaganza, where the Law Professors of Summer celebrate another triumphant season of victories over their hapless students, our profession, and whatever remains of their own integrity.

http://sealslawschools.org/submissions/program/programwp.asp
The lawprofs can attend a discussion of role-play and other innovations in teaching constitutional law. Then they can hobnob at the dozen or so receptions, galas, luncheons, and the, uh, teen pizza party. Some of these foodfests are sponsored by legal book publishing companies. (Explain again, law "prawfs" how there are important pedagogical reasons to assign $200 casebooks instead of instructing students to print out or read particular cases online). Lots of "sponsored breaks" too, not to mention "a myriad of unforgettable" on-site restaurants and bars, so no law prof need role-play constitutional history or articulate his or her baseball and the law insights on an empty tummy.
They can hear what Indiana Tech Law honcho and jet-setting party animal andre douglas pond cummings has to say about Ferguson. Then they can hit the links at either of the resort’s two exclusive 18-hole golf courses. (West Publishing is sponsoring a golf tournament).
They can ponder whether Edward Snowden is a "Patriot, Traitor, Whistleblower, [or] Spy." Then they can rejuvenate at the 50,000 sq. ft. spa, rated No. 1 in the world by Conde Nast, and designed to look like the Nasridian royal digs in Granada, Spain, with  stone arches, cypress-lined gardens, and Moorish-style windows. I dread the day when the crisis in legal education has reached such proportions that lawprofs are forced to have their prestigious bods exfoliated at  a spa that does not resemble a medieval palace.
They can attend a panel on "International Comparative Inequality," or listen to the head of the oh-so-progressive SALT (Society of American Law Teachers) organization advise fellow law faculty on "navigating identity" and "finding your voice." Then they can pluck refreshments from the trays of silent low-wage immigrant caterers.

The resort boasts seven pools, four on the waterfront with personal butlers and cabanas. Granted, the lawprofs deserve a few moments of tranquility and ease after gifting a suffering planet with their advice on "International Crisis: Ebola, ISIS, and Late-Breaking Events." If only the personal poolside butlers were authorized to pass out Nobel Peace Prizes along with tropical-themed drinks.

There is a panel called "Innovations in Academic Support and Take-Aways for Law School Pedagogy." Isn’t that fine professorial wording? Much better than "Adjusting to the Fact that Our Students are a Lot Dumber than They Used to Be Because We Keep Lowering Admissions Standards to Keep the Money Flowing." Afterwards, the law professors can take resort shuttle boat transports to "half a mile of golden private beach."  Because the real "Take-Aways" of this event are callous self-indulgence and exploitation.

More seriously, there is a panel on law faculty suffering from mental illness, featuring a Charlotte Law Prof who has experienced major depression. I do not want to mock this, but it is fair to note that there is no panel on the psychological impact of spending six figures of borrowed money and three years of one's life to attend a poorly-regarded law school such as bottom-of-the-barrel Charlotte, only to realize too late that the degree and education may be worthless or worse-than-worthless.

Barry Currier, the Managing Director of the ABA Section on Legal Education and Admissions to the Bar will be at the SEALS shindig, and this fun-loving ex-dean of two lousy law schools will surely beam with delight when cocktail-emboldened fellow revelers offer some good-natured teasing about regulatory capture and revolving door access.

Daniel Bernstine of LSAC will be there too, and this scam-bloated gent deserves some love, beyond his trifling $700,000 a year salary, for rescuing dolphins via the indirect method of funding law school pipeline projects that target children. The Boca Raton resort offers guests an Intracoastal Waterway cruise and ocean sail on a 55-ft. catamaran yacht, so perhaps the grateful sea creatures will have the opportunity to thank Bernstine in person.

Access Group’s President and CEO Christopher Chapman, that humanitarian prince among loan sharks, will not fail the feast, and who could deny him some well-deserved R&R, given that he runs an outfit responsible for 18 billion in student loan origination and still made time to serve on the ABA Panel for Financing a Legal Education.

To be fair, I will say that overall the scholarly presentations are not quite as frothy as in the two preceding years, a low bar indeed. But even generously granting, for argument’s sake, that some legal scholarship is better than dilettantish posturing or same-old same-old, it can surely be done without the perk of an expense-paid luxury vacation on top of those customary five-figure summer research stipends on top of law professors' best-in-academia baseline salaries.

I wonder if the law professors will raise a toast, even a boisterously insincere one, to their incoming students, whose misplaced trust and likely future misery  has made  the SEALS conference possible.  Scambloggers tend to refer to recklessly naïve law students as lemmings, but this event conjures up alternative animal imagery for the scam-doomed Law Class of 2018, that of clubbed seals.
Posted by dybbuk123 at 06:00