What the Washington and Lee Law Salary Survey Says.

In 2011, the ABA amended its Standard 509 to require each law school to conduct an annual nine months out segmented survey of its graduates to determine employment rates and categories of employment. From the Class of 2011 and 2012 surveys, we learned that the overall percentage of recent law grads who obtain full-time nonsolo law jobs is barely 50% overall, and for some schools much lower, a rude awakening from the sweet law school narrative of 95% employment rates and hefty starting salaries.

In deference to the findings of various courts, I will not use the word "fraud" to describe the behavior of the law schools in luring bright but naïve kids into massive debt by marketing a beautiful mirage. So here are some other words in lieu of "fraud": false, deceptive, deceitful, unethical, unprofessional, disgraceful, a sickening betrayal of trust, a forfeiture of the moral right to instruct students on professional values, a scam.

Unfortunately, the ABA has rejected proposals to require the law schools to conduct salary surveys. Therefore, the inflated salaries touted by the schools remain uncorrected and unapologized-for. [1], [2]

In this regard, I want to somewhat commend Washington and Lee School of Law, an overrated mid-first-tier trap. The school has conducted an annual salary survey of employed grads, nine months out, since 2006. The sample size for its salary surveys is higher than one might expect-- the vast majority of employed grads reported their salaries. So the survey is useful, though hardly perfect. The employed grads who did not report their salaries (employed nonreporters) would probably have dragged down the medians, and needless to say the unemployed grads would have. What I think is valuable here is that the W&L salary survey has been ongoing for the better part of a decade, permitting a year-by-year comparison and a window into the dramatic decline in the market value of freshly minted lawyers, at least those graduating from this non-T14 Tier One school.


For instance: the W&L Classes of 2007-2009 reported median starting salaries of $75,000-$90,000. The Classes of 2010-2012, by contrast, reported median starting salaries of $57,404-$60,998. (And, again, these numbers are skewed upwards because the survey excludes unemployed grads and because the salary nonreporters likely had lower salaries the salary reporters).

Law students: There is a good chance that you will never obtain a full-time law job. But even if you do, you may be unpleasantly surprised by the numbers on your paycheck. You already know that your professional opportunities and economic rewards will not match those enjoyed by your Boomer parents, who went to law school in a different era, a comparative economic Arcadia. But you may not yet have grasped the lesson to be drawn from W&L's salary surveys: even the lesser payoff obtained by your slightly older siblings, who got their JDs in 2007, 2008, or 2009, will probably elude you. 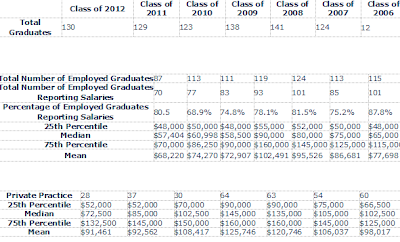 Selected from: http://law.wlu.edu/admissions/ninemonthdata.asp (scroll down)


[1]  See Christopher Polchin, Comment, Raising the "Bar" on Law School Data Reporting: Solutions to the Transparency Problem, 117 Penn St. L. Rev. 201, 216 (2012) ("However, the new standards are lacking in the crucial area of school-by-school graduate salary information, which suggests that the ABA may be more concerned with protecting law schools' reputations than in protecting prospective students").

"For the class of 2010, Florida Coastal concedes that the mean salary information is based on the responses of 29 percent of students who are actually employed, or 23 percent of the total class. . . Florida Coastal also inflates salary information by specifically directing -- through a barrage of phone calls and follow-up emails -- the choice few graduates in high-paying jobs to respond to its job survey while ignoring all other graduates. Florida Coastal. . . omits the salaries of graduates who have secured only temporary or part-time employment from its official marketing material. This material nondisclosure has the effect of "goosing" the numbers, making it appear their graduates earn substantially more money than the reality of the situation. In actuality, many Florida Coastal graduates are in dire financial straits..." Compl., ¶ 67-70.

Or, consider that, as recently as 2009, bottom-of-the-barrel Golden Gate School of Law was touting an average starting salary of $86,166. (h/t Third Tier Reality)