The Marble, The Sculptor, and the Spoiled Milk

Darcy, on the contrary, had seen a collection of people in whom there was little beauty and no fashion, for none of whom he had felt the smallest interest, and from none received either attention or pleasure.

—Actual Writer of something that contains actual literary value to society

—Keith "Birmingham Keef" Lee (aka B.K., or the "Burger King" himself)

Writing a book is as close as a man can get to having a baby – and nobody wants to be told they’ve got an ugly baby.

I post this in support of the B.K. because I am highly offended by the other posters and commentators here and their superficial criticism of the book in question. I instead think that B.K. is nursing us exactly what nutrition we need. I hope you don't mind if I plug this guy's book; we need some positive, dairy-based, past-the-expiration date energy on this site. His book is incredible—so incredible that when I bought my copy, I knew at once that this adorable neonate had to be signed in person by the author.

So, I flew to Birmingham, AL where the author was holding a public book signing. He also delivered a short presentation, of which I took notes to share with you all, to counter-balance the typical childish negativity and sarcasm of this site. You really ought to listen to a different moopoint. I heartedly endorse Birmingham Keef's book, and am dreadfully glad he refused to abort it during the third trimester, even when the doctors warned him there was a 90% certainty of literary deformity.

Evenin'! Let me get right down to it: don't cry over spoiled milk, my Pappy used to say. I have followed that advice ever since, though I spill it often. In fact, I once upped Pappy by havin' the gall to drink any milk that done got spoiled! Can't cry over drunk milk! I oughtta mention that there are different types of spoiled milk; some 'us got degrees done spoiled, some got jobs done spoiled, some got marriages done spoiled, but don't cry about it! You spill it, you drink it! We'll drink our way out of this mess, you'll see.

I'm here not to coddle y'all but wake you up! You gotta stop your whinin' if you want fine dinin', my Pappy said too. That law degree ain't no spoiled milk; it's BUTTERMILK! And buttermilk pancakes will bring you success, even with only a degree from an unaccredited school so obscure people wonder which country its home city is in.

Now let my own introduction speak for itself:

At this point, the audience was highly motivated. Several recent under-or-unemployed law grads immediately stopped texting on their phones, which they had been doing the entire time Keef was speaking, and instead began acquiring high-level wealthy corporate clients on the spot, right there and then. Incroyable! The problem was, as Birmingham Keef repeatedly mentioned with his highly apt metaphors and folk wisdom, not that there was a supply-demand imbalance between too many lawyers and too few jobs in the economy, but rather one of attitude: it's all you lazy crybabies who think you can score Alden-shoed partnerships with part-time work, done only when convenient between Facebook spamming and Twitter gossip.

ABA bless you Birmingham Keef, you are our new Darcy.

Got Spoiled Milk? Read and learn the recipe for professional success yourself: (ABA, 2013; $29.99 Hardback) 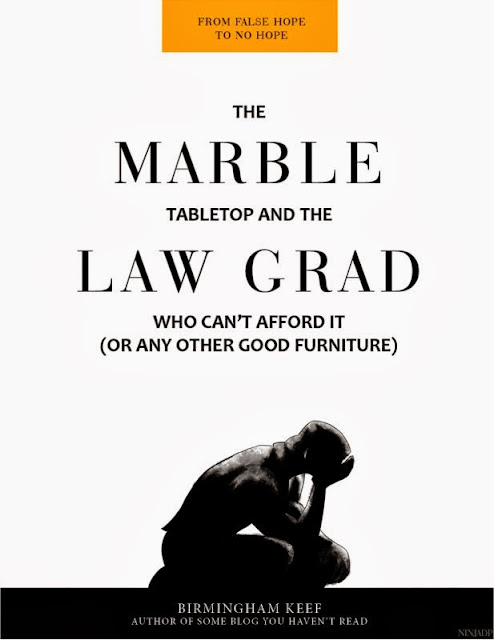