One of life's mysteries solved

Life is full of mysteries.  Do aliens exist?  Is there life after death?  And of course, where do those lost socks go when you can't find them in the washing machine?

I can happily reveal that through extensive research, I've discovered the answer to that lattermost problem.  Those missing socks have been located.  Turns out that when a sock goes missing in the washing machine, it's actually been recruited by inGenius Prep to work as part of an army of sock puppets pretending (1) to be interested in inGenius Prep, and (2) to have used inGenius Prep's services and been very satisfied.

inGenius Prep's "Marketing Department"
Here's how it works:
1.  Puppet #1 visits web site and posts message on the discussion board, like this one posted by the puppet named "D14", interested in medical school admissions:

"I've been looking for a good application consulting company, and my cousin recommended inGenius Prep. Has anybody heard anything about it?"
Note that Puppet #1 joined that community on Thursday June 27 at 10:52am, and the post was made that same day only twelve minutes later.  Note also that this is Puppet #1's only post ever made on this site - it came here solely to pretend to be interested in inGenius Prep's services.
2.  Puppet #2, in this example called "GBG2014", visits the same site and answers the question:

"Actually, yeah I have used their services. They were really helpful and gave me useful advice and constructive criticism on my application. Their counselors are from top med schools so they know what they're talking about. They are also less expensive than other companies, which for me was a huge plus. I am planning on using them again (hopefully) for interview prep.

I just found out about them during the application process, but they also offer services to help craft your med school candidacy while you're still an undergrad. My little sister, who is going to be a sophomore, is going to use them for that.

Hope that helps."
Note that Puppet #2 joined the site Monday July 8 2013 at 12:57pm, and made its one and only post on that site eleven minutes later.
Neither puppet is ever seen or heard from on that site ever again.  The sole purpose of the visit was to ask about inGenius Prep, then give a glowing review of inGenius Prep.
But wait!  Puppet "D14" is evidently not just interested in medical admissions; he's also interested in law school too.  This is one smart puppet!
Over on a law school admissions site, Puppet #1, "D14" (and that's some lazy sock puppetting when they can't even be bothered to change the name of the puppet), asks the following:

"I've been looking around for an application consulting company to help me with my personal statement and other application stuff this fall, and a friend of mine recommended inGenius Prep. Has anybody heard anything about them?"
This time, the readers figure out that "D14" is merely the sock-covered hand of inGenius Prep, and quickly tells "D14" to shut up and move on.  Note once again the puppet MO - join, post question about inGenius Prep just minutes after joining, then never appear again.
I appreciate viral marketing, and I appreciate trying to drum up support for a new business online.  But do so on the merits of the company, not by providing fake reviews of your own services and pretending that you have satisfied clients.  Remember what we talked about recently, David?  How all these little things point to one conclusion: "SCAM!!!"
David, my offer still stands.  If you can provide me with anything to counter any point I have made about your company, I will publish it right here and eat my own words.  I have offered you the chance to give examples of your success stories, your proven record of helping students truly get into schools they would not have been able to otherwise, and any shred of evidence whatsoever that your company is providing value in any form.
I have still heard nothing from you.
I guess it's hard for you to type with socks on your hands. 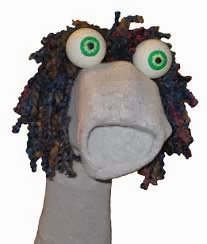