In a comment on a JD Underground (JDU) thread last year, I referred to a law professor conference at a seaside resort in Hawaii, where Sturm Law Prof. Nancy Leong was one of the speakers, as "a gravy train, or shall I say, a luau train." "Gravy train" was a reference to the free vacations masquerading as scholarly conferences that law professors routinely hold for themselves, vacations ultimately paid for by their massively indebted students. "Luau train" was my reference to the fact that this particular law professor conference was held at a Waikiki beach resort. Where, you know, they stage luaus for resort guests. Leong described my joke about "luau train" as an effort to disparage her Native Hawaiian ancestry, something I had no idea she possessed. I can hardly believe her ludicrous interpretation, and suspect that she does not believe it either.

Leong suggests that the scamblogs do not provide substantive criticism of her scholarship, just attacks on her identity. This is false. It is telling that Leong, in her blog post at Feminist Law Professors ("Identity and Ideas," part one), declines to identify the actual JDU threads and OTLSS posts in question, which are chock-full of substantive criticism of her work and qualifications. Furthermore, Leong does not once refer to her own article, "The Open Road and Traffic Stop: Narratives and Counternarratives of the American Dream," 64 Fla. L.Rev. 305 (2012), which is the target of most of the scamblogger criticism, and my own satirical post:

In this law review article, Leong complains that caselaw analyzing the constitutionality of traffic stops is "dry," "mundane," and "focused on minutiae," as compared to Hollywood road movies, and uses the word "narrative" 164 times, which must be some kind of record. Her article is a prime example of puffed-up and sophomoric cultural criticism pretending to be legal scholarship. A prime example of irony too, in that Leong has asserted that legal scholarship is immensely valuable to students and practitioners. I wonder if any medical school professor has ever published an article in a professional journal complaining that diagnostic manuals are dry, mundane, and focused on minutiae as compared to the exciting doctor narratives presented in fictional TV shows.

Leong is on stronger ground in criticizing some wisecracks or offensive comments about her pulchritude (only one of the comments she cites is by me). But it is an unsayable truth that attractive persons, of both genders, are sometimes rewarded in ways they do not necessarily deserve. I believe social scientists call this "sexual capital."

You know, some 18th century French aristocrats probably complained that they were the subject of unkind remarks by the peasants they exploited. The law professoriate may not generally see itself as a citadel of privilege and exploitation-- indeed, some lawprofs make a big show of their allegedly progressive politics. But why are they paid so much for such meager workloads? Why do they enjoy perks like free vacations-- excuse me, conferences--in Hawaii and the Breakers in Florida, and five-figure summer research stipends to top off their six-figure salaries? Why is their scholarship so roundly ignored by bench and bar? Why do so many, including Leong, have such meager experience as legal practitioners? Why do their students typically graduate with no idea how to represent a client on any matter, even after three years of expensive professional education? Most importantly, what, if anything, are the moral responsibilities of lawprofs now that it is clear beyond a residual doubt that law school is a debt trap and that the profession is beyond saturated, i.e. that they are getting rich off the likely future misery of young people who trust them?

These are the issues that all law professors ought to engage, including Leong, in light of their enormous privilege and the harrowing post-graduation fate that awaits most of their students. Of course, it is probably easier on the inflated, if fragile, lawprof ego to avoid addressing these issues altogether, in favor of collecting stray outrageous comments in order to portray oneself as a victim.

As to "harassment," a recurring word in Leong's post, I want to note how Leong reacted to my satiric post about her law review article, which was published on October 25th. On October 28th, Leong telephoned me at work. (I did not take her call). She did so in spite of the fact that my scamblogging is entirely pseudonymous. (Law professors have six figure salaries and tenure or tenure-track jobs, and scambloggers have pseudonyms. Any of them wanna trade?) On October 30th, Leong emailed me, demanding that I discuss what she deemed my racism and sexism, after which she would decide "whether or with whom I should share this information about your identity." Leong insisted that the discussion be conducted by telephone. She even imposed a deadline. ("If I do not hear from you by 5pm CT on Friday, November 1, I will assume that you are unwilling to engage in a discussion with me"). Naturally, I did not call her or reply to her disgraceful email, and will not.

Leong imagines that law school critics are trying to exclude her from online discourse  due to her native Hawaiian ancestry and her gender. However, when Leong left two brief and condescending comments on a JDU thread, the JDU posters indicated that, far from seeking to silence her, they were eager to hold a dialogue. But Leong declined. (See below). In my view, law professors need to hear the criticism and the hurt expressed by recent grads (and many not-so-recent grads), whose misplaced trust and enormous student debts made those same law professors rich. 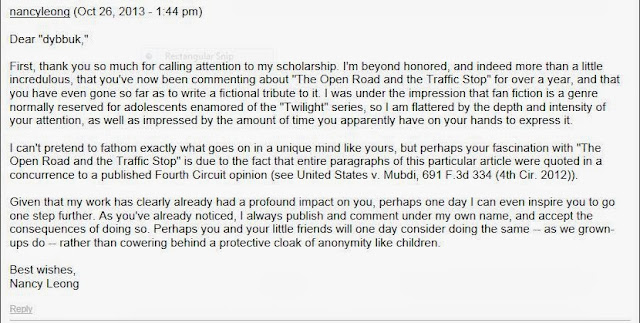 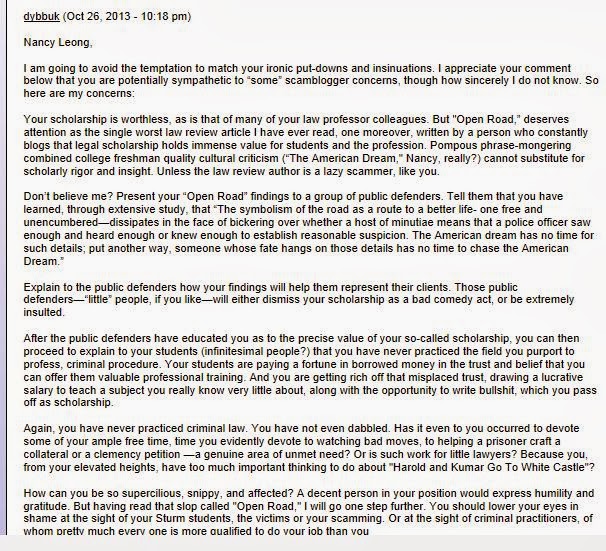 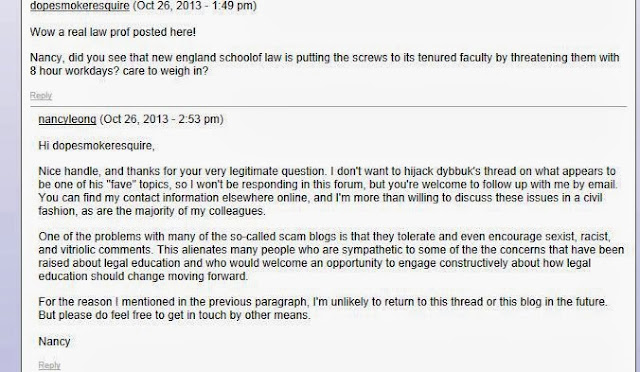 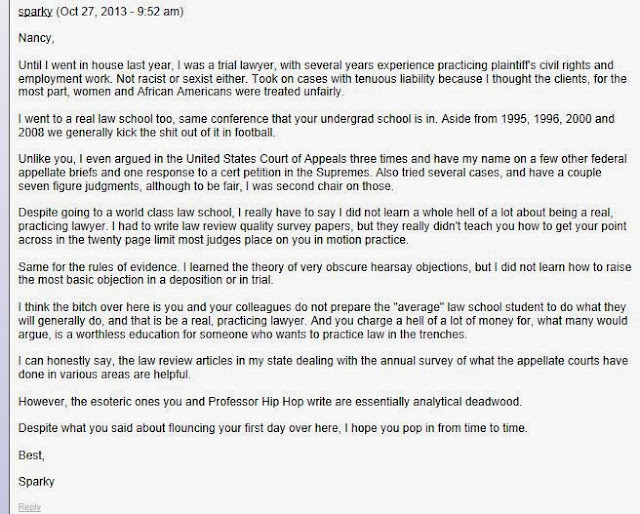 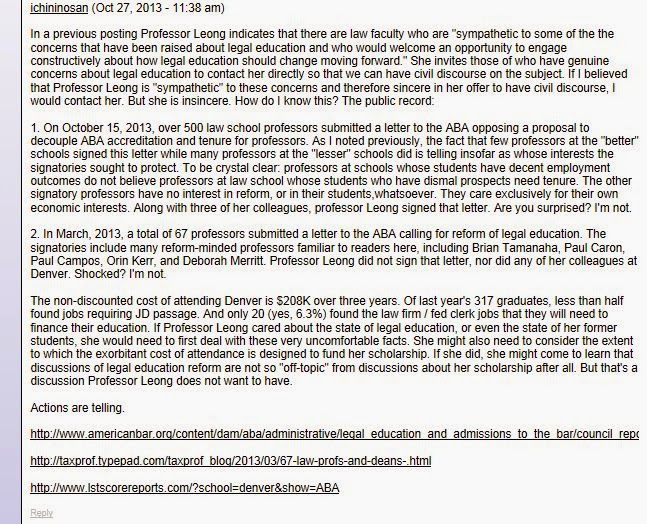