Law Professors in Luxury: The SEALS Shindig at the Breakers in Palm Beach. 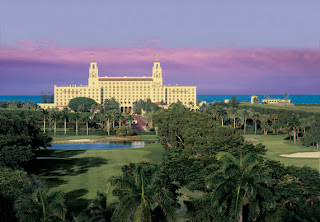 (Thank you, law students, for treating 800 of your most cherished law professors to a week of galas and fun-in-the-sun at one of America's poshest oceanfront resorts).

You may be one of those tender-hearted JDs who worries about injustice and inequality in our profession. Perhaps it troubles you that law professors are underpaid with their meager six-figure starting salaries. Or perhaps you can't stop fretting about how law professors are cruelly overworked with their burdensome six-to-nine hour per week teaching loads, plus the expectation that they publish an article every other year or so that nobody will ever read. Fortunately, I can offer you this bit of comfort-- these worthy educators do, sometimes, obtain tiny little perks and treats to compensate them for their immense sacrifices, such as routine five-figure summer research stipends, and such as free week-long summer vacations at the Breakers resort in Palm Beach, Florida.
As described on its website, the Breakers is a "spectacular resort destination on Florida’s Atlantic coast." The site adds that "The Breakers Palm Beach, has lured generations of discerning travelers to its idyllic, Italian-Renaissance setting. Experience the irresistible charm and storied history of this legendary oceanfront resort, which seamlessly blends with an amazing range of modern amenities. Feel the allure of its glamorous yet classic ambiance, the warmth and care of its devoted staff...you will quickly discover why The Breakers is a peerless destination, well beyond what you would expect of the finest luxury hotels and beachfront resorts in North America."  According to the hotel review site Oysters.com, "the sprawling 140-acre resort feels more like a Renaissance palace than a hotel."
From August 4th through August 10th, approximately 800 law professors and law deans from all over the country assembled for the Southeastern Association of Law Schools (SEALS) Conference at the Breakers. According to the conference program, the professors held many fascinating panels, workshops, colloquia, and discussion groups. The overwhelming majority of these two to three hour sessions involved ten to twenty moderators and discussants, so it is unlikely that the participating law professors found their scholarly preparation to be too onerous.

There were numerous workshops on various aspects of constitutional law, including one on "Creationism in the Classroom," and another on "The Media and the Supreme Court." There was a "Pecha Kucha" on Professional Responsibility. There were "new scholars colloquia" galore. One "new scholar" gave a presentation on "Legal Ethics and Global Justice." Another gave a presentation called "Seditious Acts of Faith: Government and the Conscience of the Catholic Church." There was a panel  on "The Evolving World of Chinese Real Estate Law." There were two sessions, a panel and a discussion group, on the topic of "Self-Promotion in the Mode of Abraham Lincoln- not P.T. Barnum." A dozen or so imaginative educators held a discussion group entitled "Teaching the Wire: Fiction as a Pedagogical Tool."

Unaccredited Indiana Tech's associate dean, the white-as-dandruff apostle of hip hop and the law andre douglas pond cummings was there, gracing a panel about Business Associations with his (self-described) "dynamic" presence. However, I wonder whether this great fighter for global justice and scourge of all things capitalized found conferencing at a  domestic resort, however elegant, to be a let-down, given that not so long ago he went to Lugano, Switzerland to deliver a talk on his law review article: "Thug Life: Hip Hop's Curious Relationship with Criminal Justice" at a conference on "Intersections of Law and Culture."

The SEALS conference featured high-minded stuff too, such as a panel entitled "Legal Theory, Political Philosophy, and Ethics," in which, according to the conference program, several law professor discussants yapped about how to "engage explicitly and unapologetically in debates about what justice requires and [how] to connect our legal scholarship to larger normative arguments in political philosophy and ethics." And, because the world yearns for more law review articles, there was also big panel of fourteen research deans, led by moderator Jennifer Bard of Texas Tech Law School, who pooled their wisdom in a workshop entitled "Research Deans Talk About What Works (and What Doesn't) on Encouraging Faculty Research and Scholarship." Jennifer Bard, by the way, is the author of a priceless article, published in the "Journal of Legal Medicine," harshly criticizing Brian Tamanaha's book Failing Law Schools for its failure to appreciate how students benefit from law professors' legal scholarship. Maybe she will publish another article describing how students benefit from their professors' galas at the Breakers.
Yes, as stated, there were lots of panels, workshops, colloquia, and discussion groups. The good professors all surely attended a couple of these things, or spoke for a few minutes on a panel, but basically this assemblage was for shmoozing and boozing at daily galas and receptions, for golfing (the resort has two 18-hole courses), for sailing and other watersports, for  lazing by one of the resort's five heated oceanfront pools, or its private beach, for shopping in its boutiques, and for being pampered in its full-service spa-- all, of course, in an idyllic Italian Renaissance resort setting, by the beautiful Palm Beach seashore, travel expenses and lodging paid. (Thank you, law students-- or, rather, no thanks offered because the professors take such perks as their lordly due).

I wonder whether any these law professors or law deans had any dim sense of moral unease about throwing themselves such a lavish party on the dime, ultimately, of their students and the public?  I wonder if any of them regarded such luxury as unseemly at a time when so many of their recent graduates are drowning in debt, underemployment, and despair. And I wonder what message shindigs like this send to the practicing bar. If, for example, it were public defenders holding a conference, it would most likely be a local or, at most, a statewide event, held at a Holiday Inn or something. No private beach. And the public defenders would talk about serving clients, not "larger normative arguments in political philosophy" or, uh, self promotion in modes other than that of P.T. Barnum.
Law professors. It isn't just they comport themselves like aristocracy that bugs me, it is that they do so while maintaining a self-image as the sans-culottes.
Posted by dybbuk123 at 06:30