We are now at the 90% point for applicant count in this particular cycle, and for those looking to see a reduction in the applicant numbers, the news is not good. It appears that the cycle for 2018 is lining-up to be virtually identical to the 2013 cycle, which we have not seen in, well...five years. Applicants are up approximately 8% compared to 2017, and as of this date are at approximately 54,000 total.

One last quibble - LSAC has been consistently over-predicting the percentage increase by several percent over the course of this cycle. As has been detailed previously, and has happened again this year, the explanation can be tied to matching up data from cycle to cycle. If LSAC chooses to go two weeks without reporting data (which sometimes happens), that's fine...but then, when you do report data, you need to make sure you "skip a week" to do the apples-to-apples comparison properly with the prior cycle. That can be the difference between saying applications are up 8% on one particular week, when in reality, it is closer to 2% for that same time last year. 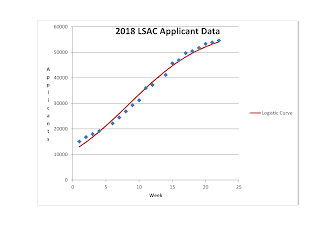 But enough of that, because (1) it has been documented, and (2) ironically, the "misreported" percentage differences are proving to be correct now that we are late in the cycle. That is, an actual 8% increase over last year currently (the following charts also predict the rest of the cycle after Week 22.  In addition, these curves are the fitted data curves, and the data points themselves are not shown so as to see the trends more clearly). Why is this happening?   More below the fold: 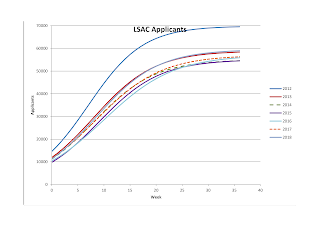 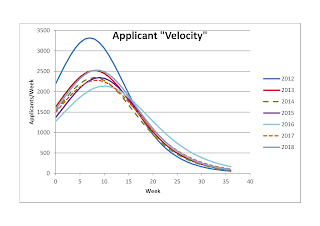 One, it was probably bound to happen soon anyway as part of a natural cycle. The last few years (especially 2016) were dismal for the Law School Cartel. Now, a new "crop" of young people have moved their way through undergraduate school, and are likely not that tuned-in to the state of the legal industry. Law School sounds cool! Why not do it? When you watch TV, all lawyers are rich, so the decision is easy. And the Cartel does next to nothing to dissuade these misplaced notions, so it's all gumdrops and rainbows and dolphins except for those truly in the know. While the youngest among us do share some responsibility by "doing their research" (especially in this on-line, all-the-time world where the data is easy to come by), I still believe that experienced folk with actual knowledge have some duty to warn.

Speaking of data, here is some nicely summarized data here. Lawyers are still heavily overproduced, if anyone cares to look.

Two, I think there is a real existential question at work here, which is laid out by this prior post on OTLSS:

So what is the recommendation? As hard as it is for those with non-stem college degrees, it is a lot harder for those who just have high school degrees. State government jobs are drying up too...everything is drying up. We have a false economy... sure lower employment, but all of those jobs out there are lower paying service jobs...somebody needs two of them to make a living....and speaking of bubbles... the Stock Market is just waiting for a huge deflation. Amazon a 300 plus PE ratio? Are you kidding me?

What is it indeed? A later commenter points to the trades as a solution, and in some respects that is probably true. However, jobs such as "the trades" are not full of sugarplum fairies either and have their own idiosyncratic drawbacks, along with many, many other careers. What are college educated people supposed to turn to, when "every major is terrible?" And don't we want an "educated" populace? We said we did, at least once upon a Boomer time ago. Unfortunately, the market is increasingly not supporting an educated populace, which I submit generates another host of difficulties. Scamblogs like OTLSS saying "don't go to law school," while good advice for many, is admittedly weak without being able to provide at least one sound alternative. At least we are willing to recognize our own shortcomings, I guess, as opposed to those who peddle false hope for dollars.

One thing is for sure - just as you really can't pull yourself up by your own bootstraps, neither will we magically "innovate" our way out of this conundrum. The only sure advice, at this juncture, is "don't follow the crowd." Unfortunately, a new class of applicants have yet to learn this lesson. Don't go to law school because you weren't able to come up with any other alternative - that is, in fact, the worst reason of all.