Off to the Races with a New Year of Applications

It's that time of year again, where LSAC starts reporting the application and applicant tally for 2017-2018!  I, your humble wanna-be data wonk, have been diligently hitting the F5 key for the last several days, and LSAC has updated their website on  December 5, 2017.  Let's see what is going on: 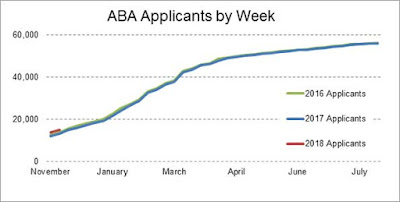 Strangely enough, there appears to be at least two data points on the graph, not one.  Comparing the new data to the older data I have been recording as LSAC publishes it, this time last year the first data point was 14,892 applicants, so I show an increase this year of 1.24%, not 14.2%.   Maybe they are representing a point with a small line, but this would indicate another data point we are not privy to, regardless.
Another small anomaly - for the past four years by my reckoning, LSAC always produces their first data point from "Week 48" of the calendar year.  This year, they produced it from "Week 47", which leads me to believe there is another data point out there.  "Who cares?" one may ask, but in the past it has been notoriously difficult to line up yearly data in an apples-to-apples fashion, so I personally believe that the 14.2% increase has to be taken with a grain of salt.  Perhaps it's correct, perhaps not.
In any event, expect the Diamonds and Simkovics of the world to declare Mission Accomplished, Problem Solved in the legal education arena.  What more evidence do you need, other than more dupes flooding through the doors?  Although, I do want to make special mention of Matt Leichter's analysis (who is already on our blogroll) - back in 2012-2013, when the Cartel was declaring that by 2016 "things would be different," it appears it is yet still more of the same on the job front.
Happy Days are most decidedly not here again, but now that a handful of law schools have decided to call it quits, everyone must think all of the slack is out of the market.  Time will tell.
Posted by dupednontraditional at 05:00