Another View of the Economics of a Law Degree

OTLSS has been fairly consistent in its fundamental message over the last four years: law school is too expensive overall for what you get, the job market is not favorable and continues to not be favorable to graduates, and what program you get into is a primary consideration assuming you still want to take the plunge.

An unpopular message, of course, if you are involved in legal education.  Especially if you do not have a long history and a large endowment that allows one to be picky about who it lets in.  But the scambloggers don't know anything, of course, so best to dismiss them as whiny losers - which was the extent of the response from the Cartel to scamblogger criticism.  Sure it was couched in fancy terms and attempts to legitimize the argument with dubious economic data, but that was the end result.

People with no dog in the fight, however, would seem to say otherwise, which much more straight-forward data: 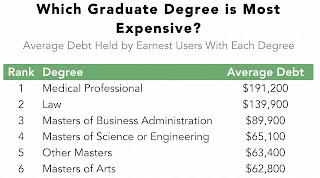 Per this chart, we seem to know this already.  Law degrees are one of the (inexplicably) most expensive graduate degrees on the market.  MBAs and STEM degrees are significantly less by contrast.  Heck, even certain Arts programs require actual studio space, to say nothing of science, engineering, and medical facilities required to teach their respective subjects.  Law, by contrast?  Pfft, open up a mall storefront and some WestLaw accounts and you're good.  Books and fax machines are expensive, but not THAT expensive.

Well, what about that stellar success that awaits 98.6% of law graduates, or whatever the Cartel advertises as a good job rate nowadays? 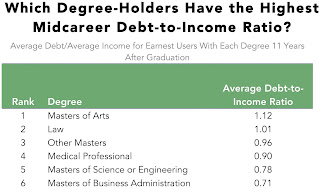 Hmm.  Well, eleven years out, Law Grads still have a one-to-one ratio as regards their income and debt burdens.  Doctors are down to 0.90, which is to be expected given their initial high-cost/high-pay scenario.  MBAs and STEM folks are down into the high 0.70s.  MAs sadly seem to increase, which points to why many folks ran into the arms of the Law School Cartel in the first place.  Hey, with no other points of comparison, Law looks better than a career in the Arts...!
Lastly, preftige matters, full stop, as can been seen from this last chart: 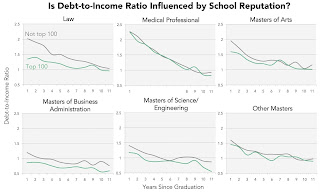 It would be hilarious if it wasn't so sobering.  Graduates from non-elite law schools (if you even want to call the top 100 "elite" in the first place) start with TWICE the debt burden, on average, that their preftigeous conterparts, yet still only have the above-referenced 1.0 income to debt ratio eleven years out.  While you see some confirmation of this phenomenon in other fields as well, only in the medical profession does in not seem to matter where you went to school(?), at least as far as economics are concerned.
Again, one has to ask: why is law school so expensive?  Why is the data so starkly different than the "positive" trends that are so noticeable in other professions?  How can it possibly cost twice as much to educate a lawyer as opposed to, say, a scientist?  Yes, the law can be complex to the uninitiated, but over time one's knowledge base and skills improve as in any field of study.  The same it true with, say, organic chemistry, for example - people manage to make significant educational strides in fields of that nature as well, but apparently at half the price.
In any event, the article closes with the following:  So, if you are seeking an affordable graduate degree that will boost your earning power, what should you do?
Yes, indeedily-doodily, that is the question.  It would appear that the data speaks for itself.  Don't go to low-tier law schools on vague and ephemeral notions of "defending liberty," "pursuing justice," or "loving the law," that's for sure.  Also, don't go to law school at all, unless your social capital allows you entre into top programs with a lock on a job prior to starting.
Unless you enjoy having debt equal to your earnings for decades or more, of course.  Sadly, this appears to be the case even in the best of scenarios.
﻿
﻿
Posted by dupednontraditional at 10:28