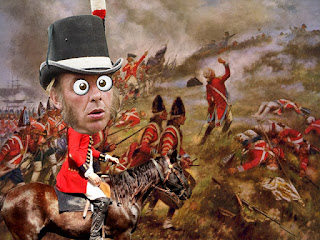 Looking around, I realized that it has been a year since the first verses of "The Battle of LawScam Deans" were published!  Enough has happened since then to warrant an encore, so here goes:


(with apologies to Johnny Horton, "The Battle of New Orleans")

The schools threw open every door they had,
but student LSAT scores were really, really sad,
and the bar-pass rates started falling through the floor,
so Dean Allard said "it's the bar exam that's poor!"

And the Scamblogs blogged 'cause they felt it was a calling,            There weren't as many lemmings as there was awhile ago,
The Scamblogs jeered as the Cartel found it galling,
From the T13 to the Law Schools down below.


Cooley had no choice but to fire a bunch of Prawfs,
Hamline merged while uttering quiet coughs,
and just when UMass was about to take a fall,
Kosko and Carr knifed the Charleston School of Law.

Chorus
Indiana Tech couldn't get accredited,
So they raffled off scholarships to try to get ahead,
TJSL hit the check-cashing place,
While Concordia quietly tried to save face.


Simkovic was mad that no one took him at his word,
When the bloggers all said his work was patently absurd,
Leiter preached the papers to his echo-chamber flock,
While Merritt, the Times and Leichter said the studies were a crock.

Professor Telman said "claw back the scholarships,"
But the critics continued to give the Prawfs the fits,
Steve Freeman's faux-outrage was certainly sublime,
And Steve Diamond was convinced the Kochs were funding law's decline.


Chorus The battle continues! Again, Fight the good fight, stay strong, and run the race with endurance! The truth is on our side.
Posted by dupednontraditional at 06:00