The recent discussion of Indiana Tech and their "raffle-based" scholarship pitch made me think back to the varied posts that I've seen on this fine establishment over the years.  Time after time, I have asked myself "no, really, what were they thinking," as Indiana Tech Law School seems to solidify everything that is wrong with the current legal-education-mindset.

But, wait, wasn't there a "feasibility study" published a few years ago that explained why there needed to be a fifth law school in Indiana?  A well-researched, vetted manifesto as to why money should be spent, why multiple working hours should be invested, and scores of students should sign on the dotted line?  Yes, Indiana Tech even published it on their website!  Let's go find it: 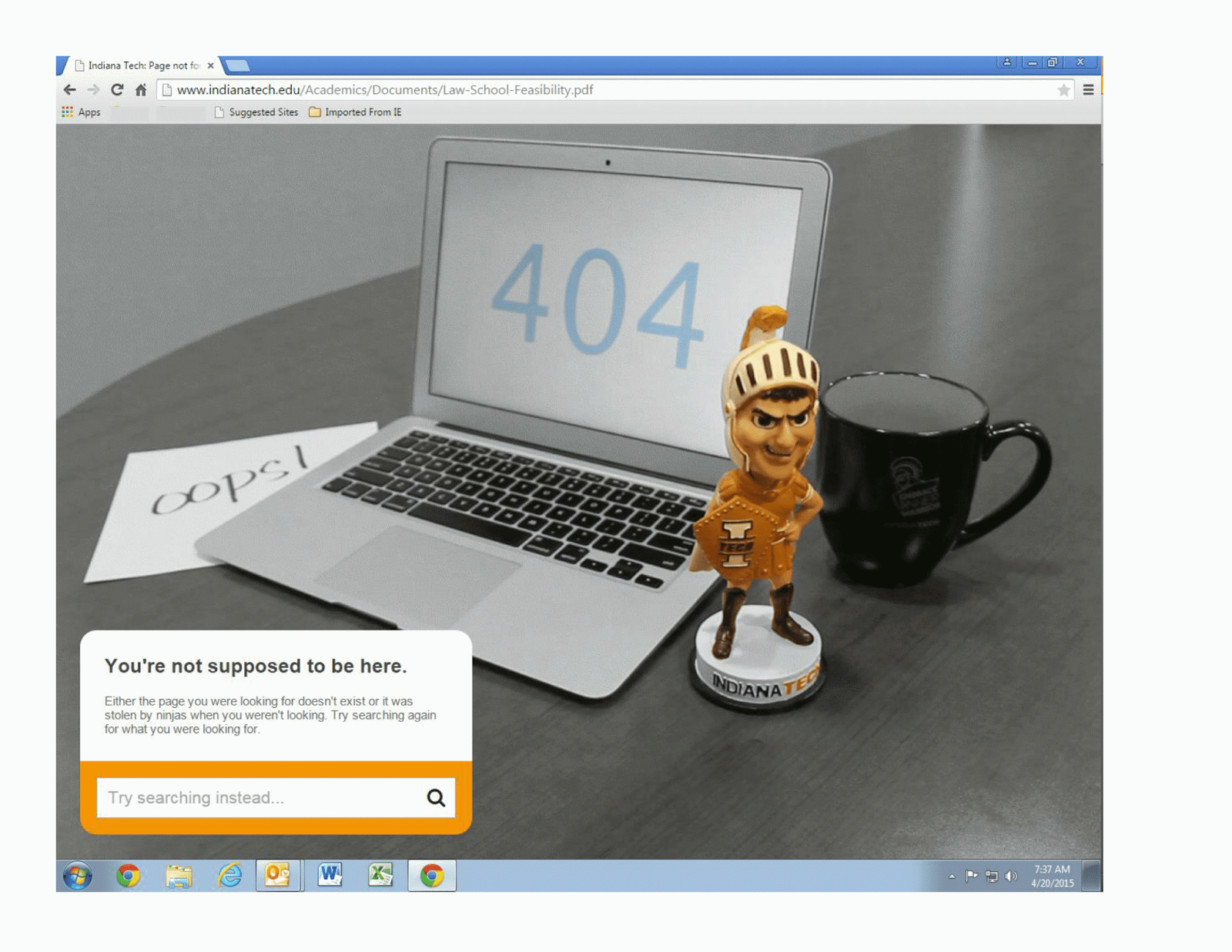 Whoops!  A muted trumpet plays "wahh wah wah wahhhhhhh....." in my head after I key in the website address.  Apparently some "ninjas" ran off with the report that only recently proudly proclaimed the raison d'etre of ITLS!

(Incidentally, it seems appropriate that "ninjas" absconded with the report.  Children of the 80s learned early on that ninjas were super-awesome-magical defenders of truth and justice and went after the bad guys...although history indicates that ninjas were, in reality, hired mercenaries that did the "dirty work" that their masters found too politically intractable and dishonorable to do themselves...say, for example, erasing "mistakes.")

Well, never fear, gentle readers!  Thanks to the mystical power of the internet, what once was lost (or absconded with) can now be found!  Join us below the fold for some highlights of the study:

1.  They knew the demand for legal education was dropping.  To counter this, the explanation was (1) demand is cyclical, (2) economic downturns show growth in applications, and (3) for the last half-century, law school enrollment has increased steadily (and tripled during this time frame).  Translation:  Housing prices never go down!

2.  They knew the debt v. income ratio for JD graduates was increasingly negative.  To counter this, they cited the "After the JD" longitudinal study from 2010, concluding that the debt incurred wasn't really that bad after all.

3.  They knew about the bimodal distributions of salaries.  To counter this, they again point to the "After the JD" 2010 study, where median debt had fallen to $50k after five years, yet "respondents reported generally high levels of satisfaction with their lives...[law students] see their education as the gateway to meaningful, interesting careers."

4.  They knew that fewer and fewer Indiana Residents applied to law school from 2006-2010.  Enough said.

5.  They knew that Indiana ranked 44th in lawyer density and 12th in lawyer GDP.  Clearly, there is some unused market-share there.  Indiana needs more lawyers, and the lawyers already in place should be stabbed in the back and should have to take a haircut, because Numbers.


The overall conclusion?  "The economy once more [is] growing at a greater rate than the supply of lawyers, [so] the current national decline in law school applications should be no longer-lived or severe than past declines."  [Snicker guffaw wa-ha-ha-ha!  Ed.]


"There is a need for another law school in the state of Indiana.  The state is fortunate to have four excellent law schools, including two that are elite national law schools.  What is good for the state in one sense is not good for many aspiring Hoosier lawyers who are well-qualified but must leave the state if they are to pursue a legal education.  Roughly half of all Indiana residents who matriculate at ABA-approved law school do so out-of-state.  Others forgo their dream entirely."

Yes, because it's all about "dreams."  Just like the fluffy cotton-candy this study was based on.

Friends, ITLS did their "research", and just like a special-snowflake law school decided that they could beat the odds.  Knowing full well what was in front of them and their graduates, they went ahead anyway.  Even with two elite law schools in the state already, and two others with long track records.  Some people would call that negligence - I assume the board of trustees does, at any rate.

Sometimes, people have to forego their "dreams," due to the harsh winds of circumstance.  The only problem is that perhaps Indiana Tech won't see their sugar-plum-profits, so they can just "write it off."  If only indebted JDs were so equally lucky.