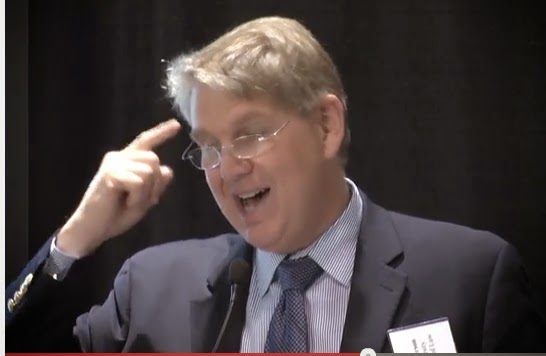 (Helpfully identifying the location of the migraine you risk by listening to him).

A candidate for the next big thing in legal education is the so-called "competency-based curriculum." Its chief advocate is the relentlessly self-promoting Indiana University lawprof William Henderson, whose meager experience as a practicing lawyer did not prevent him from launching a consulting biz that, among other things, provides law firms with advice on hiring and on conducting "360 reviews" of employees.

At first blush, a competency-based curriculum may seem like a hopeful development. How can any proposal to replace the world's most unsuccessful professional training model, the Langdell/Socratic, be a bad thing?

But a competency-based curriculum is not primarily clinical, i.e. geared to actually training students to practice law and run their own small firms. Rather, a competency-based curriculum consists of coursework designed to bolster a series of very general personal habits (aka "competencies") that legal employers allegedly favor. Or, as Henderson puts it, "the knowledge, skills, behaviors, and attributes of highly successful professionals." [1] These competencies include "for example, teamwork, communication skills, emotional self-control, problem-solving, and decision-making." [2] Or for a full-on blast of Billy's buzzword bullshit:

"[T]he types of education that will attain the highest valuation are complex problem-solving skills that enable law school graduates to communicate and collaborate in a highly complex, globalized environment. This is not vocational training; it is the creation of a new model of professional education that better prepares our graduates for the daunting political and economic challenges ahead." [3], [4]

Henderson runs a "competency-based" Legal Profession course for Indiana U. 1Ls, and has made some  of the course materials available at a site called Educating Tomorrow's Lawyers [ETL] (where lawprofs are encouraged to post portfolios of courses they believe are particularly innovative).

It is very interesting reading. Henderson asserts that his Legal Profession course "uses personality and motivational assessment tools to help students identify their strengths, opportunities for development, and values and help align them with potential career opportunities."  It also "introduces students to real-life work settings by putting them into team-based projects; assessment includes both peer feedback (360° Review) and overall team grades." Finally, it "advances professional skills through a 1L competency model that focuses on active listening, empathy, self-awareness, asking questions, presentations, and resilience." How does the course achieve all this wonderfulness? Why, through assignments like this:


"A typical team assignment: Watch a video in which a practitioner describes his experience litigating a complex case, and identify specific instances in the video when he used the attributes from the umbrella categories listed above (“At 38:07, the lawyer demonstrated interpersonal skills by saying that ‘everyone [on a jury] is someone’s father, brother, mother, sister. . . . Try to remember they are just people")."

Here is an assignment for OTLSS readers: Identify the attributes I am demonstrating from Henderson's list of "umbrella categories" when I make the following deeply profound point: We are all of us just people, but unfortunately some people are scammers. Do not be modest on my behalf. "[Y]ou can list passion, listening, or intellectual courage more than once. . . " [5]

Why do you need three years, or even two years, of ruinously expensive law school to instill professional behaviors and attributes? To build teamwork? Try joining a touch football league. To teach "communication skills"? Try joining Toastmasters or an expressive dance troupe. What about "emotional self-control"? Wait, did Henderson really say he wants to teach emotional self-control in law school? Sounds like law professors have hit upon a new rationale for making their students eat shit without complaining. They were just teaching emotional self-control.

Why is Henderson so widely hailed as a visionary within legal academia? Well, I am sure that it does not hurt that Henderson steers clear of tenure reform, which he dismisses as deriving from a "take-away mentality" that does not accord with a more forward-looking "point of view of the possibilities." [6]  A reformer can be as creatively destructive and paradigm-shifting as he likes, so long as he does not challenge the compensation, perks, and job security of the pampered law professoriate.

Another factor, perhaps, is that Henderson’s competency-based model does not require lawprofs to possess significant legal practice experience-- because, as noted, the approach is not to train students in lawyering, but to modify their personal traits or behaviors to conform to those allegedly desired by employers. Relatedly, the imperative under this approach to monitor and evaluate students’ traits and behaviors means that lawprofs will enjoy an even wider scope of authority and oversight over their students-- something that must be very appealing to those (many) lawprofs who have authoritarian personalities.

Henderson has strongly endorsed the curricular reforms implemented at Washington & Lee (W&L) [7], Northeastern [8], and New York Law School [9], notwithstanding the fact that employment prospects for students at all these schools remain awful. [10] He has even expressed a favorable opinion of the scam de la scam InfiLaw Consortium schools. [11] Henderson's endorsement of W&L's vaunted 3L program is as striking as a car crash: He said: "To use a simple metaphor, W&L is tooling around in a Model-T while the rest of us rely on horse and buggy." W&L's dismal placement numbers suggest that employers regard the place as a Model-Turd.

I acknowledge my allergy to yapping about globalized-this and entrepreneurial-that, especially when served with rhetoric about forward-looking, innovative, proactive change. Somehow it always sounds like the verbiage that a glib CEO might spout just before offshoring a bunch of jobs. [12]

I know that Henderson has written some important things about law school scamming (e.g. bimodal salary distribution; "Enron-type accounting standards"), even if he cannot quite bring himself to use the word "scam." Plus, he is right to popularize the provocative work of Richard Susskind, who has forecast the decline of what he calls "bespoke" lawyering, and much else. I just happen to believe that Henderson’s competency-based curriculum remedy, however enthusiastically presented, is a puffed-up nonstarter, or a leaky patch for the widening holes beneath the Titanic’s waterline.

[4] Of course, there  is room for a "competency-based curriculum" proponent who teaches at a law school named after a Saint to toss in such things as "values," "virtues," and an "internalized moral core." All it takes is a slight tweaking of the bullshit. See e.g. Hamilton, Neil W., Law-Firm Competency Models and Student Professional Success: Building on a Foundation of Professional Formation/Professionalism (December 10, 2013). University of St. Thomas Law Journal, Forthcoming; U of St. Thomas (Minnesota) Legal Studies Research Paper No. 13-22.

[5]  See Professor Henderson, Legal Profession Class, Assignment for Week 2. ("Before class. . . meet in your Practice Groups and identify the six BEST examples from the Schiller interview that map onto your assigned list. Your written work product, done for the Group as a whole, should include (a) the trait / skill / competency you have identified, (b) its location in the interview (e.g., "Passion in Scene 8 @ 42:23 when he says …."). There is no need to explain why the excerpt your Group identified mapped onto that specific trait / skill / competency – someone from your Group will have to do that during class. In addition, you are looking for the best examples. Therefore, it is okay to repeat specific traits, skills, or competencies. For example, you can list passion, listening, or intellectual courage more than once.")

[6] Legal Visionaries webinar, The Disruption and Transformation of Legal Education and Services (March 2014) at 24:32-24:50, 25:49-26:15 ("So I know that one of the most popular things is ending tenure, and I actually don’t think that’s a good place to start because it’s kind of a take-away mentality that doesn’t put people in a good mood to innovate, and really innovation is what we need. . . . I think the right way to do it is through visionary leadership, getting people excited about the good things that flow from adopting a change initiative and widely publicizing, you know, bright spots or examples of success. I just think we need to do it from a point of view of the possibilities and making the world a better place and making the industry better, rather than kind of take-aways.")

[8] You Tube video, "William Henderson discusses the theory behind the Northeastern Model of Legal Education," (June 16, 2014) at 0.00-0.20 ("Back to the Northeastern model. If we have to overlay it with a theory, or we need to, then we want to kind of simplify it. We think about it as immersive, iterative, and integrated approach that enables and accelerates self-directed learning, and this comes very much through the focus groups and the co-ops.")

[9] See Third Tier Reality, "A Pig in Sheep's Clothing: Indiana "Law Professor" William Henderson," (April 11, 2011) (comment by William Henderson, April 11, 2011 at 2:45 PM): ("Rick Matasar is the most innovative dean in the country.. . . . [I]t is easy to criticize NYLS and other law schools, all of them high priced. But up close, NYLS is harder to criticize because it curriculum and employer alliances are designed to attract employers and get students over the bar exam.")

[11] Jones, Ashby, Private-Equity Group's for-Profit Law School Plan Draws Critics, Wall Street Journal. Web. (October 20, 2013) (""InfiLaw is applying a private-equity model to legal education, and so far I'm fairly impressed by what I've seen," said William Henderson, a law professor at Indiana University who studies the legal profession. While its achievements so far are modest, said Mr. Henderson, "I think these are people who could make a difference in legal education."")

[12] Indeed, Henderson supports document review offshoring, though not ending lawprof tenure. See Pig (comments by William Henderson, April 11, 2011 at 2:45 PM and 2:46 PM). Race-to-the bottom economics for thee, but not for me.