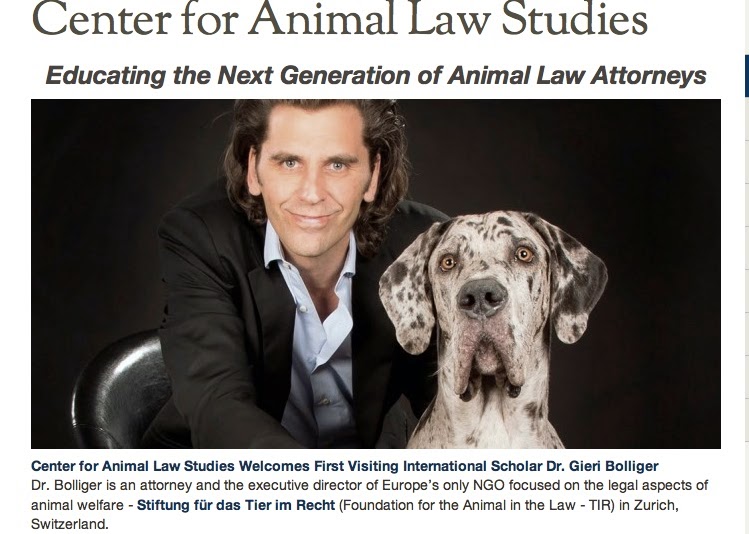 Bottom of the kennel Lewis & Clark Law School's Center for Animal Law Studies has earned a congratulatory meow, and some hearty woof-woof-woofs, as it proudly welcomes its very first Visiting International Scholar of Animal Law. This is good news for the two well-groomed critters depicted above, particularly the legal prodigy from Zurich (the one on the left, unfortunately). Maybe it is good news for our four-legged, finned, and feathered friends generally. But is it good news for law students, those biped donkeys who must foot (or shall I say hoof?) the bill?

Lewis & Clark Law School touts itself as the premier animal law law school, the top dog in the field. And with a bar-required nonfunded job placement rate of 47%, there is no reason to doubt the school’s beastliness.

Lewis & Bark (sorry) offers 33 courses in animal law--- including "animal legal philosophy & development," "animal rights law & jurisprudence," and "comparative international animal law." A law student who takes a sufficient number of these courses can obtain an Animal Law Certificate, thereby distinguishing him or herself from the pack. ("Earning an Animal Law Certificate shows future employers a deep knowledge and strong commitment to the field of Animal Law"). The school also hosts the "Animal Law Review." [1] In addition, it sponsors an annual inter-law school animal law competition-- actually three separate competitions, including a mock lobbying tournament. It even offers what it describes as "hands-on" and "clinical" experiences —such as a two-week long "Legal Project" trip to Kenya to meet with various wildlife and conservation officials, and working with a nonprofit to save the chimpanzees of Cameroon.

On its website, Lewis & Clark Law promises "growth" and "opportunities"-- pleasant-sounding lures that an animal behaviorist might classify as aggressive mimicry:


"Animal law is growing every year, and with this growth comes increased opportunities to specialize in the field. Exposure via animal law courses, animal law internships or clinicals provide an excellent means of targeting potential areas in which to develop an expertise. The various animal law opportunities available at Lewis & Clark allow students discover how they are best suited to work in the animal law field."

The website also helpfully notes that "Some may incorporate animal law into their practice on a pro bono basis or as a sole focus." Got that, struggling solos? You can practice animal law either pro bono or exclusively. You can even do both, I suppose. If that isn’t a sound way to build a nest egg, I don't know what is. And don’t say that it is too late simply because you have already graduated. Lewis & Clark offers an Animal Law LLM.

Look, opposing animal abuse is a worthy cause. But do not imagine that a Certificate of Animal Law or an Animal Law LLM will allow you to blend heartfelt ideals with well-compensated professional career. What you will be doing is subsidizing, with borrowed money, the well-compensated professional careers of others, namely entitled and well-connected scholarly jet-setters. Whose own lofty objective to defend the vulnerable decidedly excludes you, their debt-ridden student. Yes, law school, not just Lewis & Clark, is guaranteed to offer an unforgettable lesson about animal behavior—about predators and prey, about jackals and lemmings.

Animal law is a hot topic among law school pedagogues. According to a synopsis of a symposium article published in Animal Law two years ago entitled Critical Animal Studies and Animal Law:


"It is truly impressive that animal issues in the law have become so prominent throughout the legal education system. With this increased exposure to posthumanist critiques of the legal system and its status for and treatment of animals, an increasing number of those involved in legal education are rethinking the law’s species-based hierarchy that places humans at the apex. . .  .Integrating such insight into the analysis of animal issues in the law will rectify the speciesist and otherwise exclusionary formulations of the socially constructed differences between various species, which have so far been unquestioned assumptions."

I agree, but note an astonishing example of institutional exclusionary humanormativity perpetrated by those very individuals involved in legal education-- namely, the failure of most law schools to select nonhuman animals to serve as deans. Well, a few have-- such as Case Western Reserve, which was led for two years by an old goat named Lawrence Mitchell, Brooklyn Law School, which is currently helmed by a braying jackass, and the InfiLaw Consortium of Zoos, which will only hire corporate parrots. Regretably, however, law schools have yet to avail themselves of the keen minds and obvious leadership qualities of the following: