Let’s say a person squeaks through college with the minimum GPA needed to graduate (2.00, i.e. a "C" average) and then completely bombs a standardized test designed to measure reading comprehension and analytical and logical ability, scoring in the bottom 13 percent of test-takers. A euphemism for such a person, suitable for this touchy age, might be "intellectually disinclined" or, certainly, "academically challenged." But at Thomas Jefferson School of Law, that person is referred to as a “recipient of an academic merit scholarship.”

Consider the “matrix” of UGPA/LSATs used by Thomas Jefferson School of Law, beginning this fall, to award guaranteed renewable academic merit scholarships. A kid with a 2.0 GPA /140 LSAT (i.e., a "C" average in college and a 13th percentile score on the LSAT) gets a merit scholarship of $1,000 a year. And $7,000/ yr. if that kid can boost his or her LSAT performance to 145-- the 26th percentile. 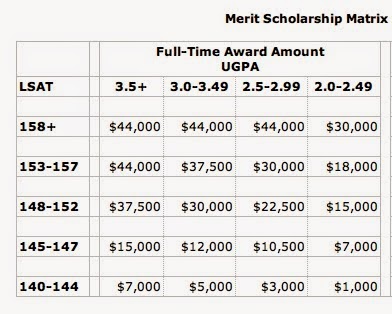 In addition, Thomas Jefferson now offers transfer scholarships to students in the top 20% of other law schools. Perhaps the idea here is that, by poaching non-intellectually disinclined students from other law schools, it can keep that pesky bar passage rate in ABA-approved territory.

But suppose other law schools get a similar idea and tempt Thomas Jefferson's own top students with some financial transfer-bait? No problem. Thomas Jefferson will counter with "defensive" mid-law school scholarships.

On balance, of course, it is better that these scholarships exist than not. If a kid is going to get scammed, hopefully the level his or her resulting indebtedness can be controlled somewhat through scholarships of this sort. Pre-matrix, Thomas Jefferson students graduated with the highest median debt load among all 200+ ABA approved law schools, even though the school's job placement record is among the worst. In light of its dismal record even relative to other law schools, it seems almost unfair to describe Thomas Jefferson School of Law as a mere scam. A grad of this institution can boast to those who obtained JDs elsewhere: "You have only been scammed, but I've been Thomas Jeffersoned."

But I am concerned about another stakeholder-- the as-yet-unpaid bondholders who financed Thomas Jefferson School of Law's schmancy new building. On June 26, 2014, the school defaulted on its debt service obligation under its loan agreement, and was likewise unable to make its next quarterly scheduled payment on September 26, 2014. The school is currently negotiating with the bondholders to restructure its obligations, which evidently total a trifling 133 million dollars. I wonder: Are the bondholders fully aware of the amount of the scholarship money, i.e. tuition rebates, that the school is planning to disburse in order to maintain enrollment? Do they understand how unlikely it is, therefore, that Thomas Jefferson will be able to climb out of its fiscal hole, especially given that 95% of the school's revenue comes from tuition?

Incidentally, the current two-week long extension on the period allotted for debt restructuring negotiations expires on October 31, i.e. Halloween. So if you know any child who plans to trick-or-treat at the homes or offices of Thomas Jefferson School of Law faculty, why not suggest that he or she dress up as Consent and Forbearance Agreement No. 10?

Hey, bondholders: No need to delay the inevitable foreclosure by giving these profligates and deadbeats a hopeless opportunity to regain solvency. Thomas Jefferson’s spacious and eco-friendly eight story palace of legal learrning could be repurposed as office space, or perhaps even downtown condos, for some lucky San Diegans. Well, lucky provided that the building is not haunted-- it is the site of a mass graveyard of legal careers. (Cue sounds of heavy rain and thunder. Flash terrifying images of a profession being murdered. Display title: "The Scamityville Horror").