A Tale of Two Scams. 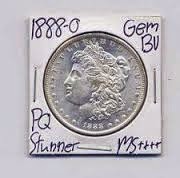 Those few among our readers who are amateur numismatists, as well as those many who have a bleak view of human nature, might appreciate the tale of Rocco Marini and his friend Harold Adamo Jr., as set forth in Marini v. Adamo, 995 F. Supp.2d 155 (E.D.N.Y. 2014).

As a young man, Marini made millions of dollars selling sweaters to flea markets. Subsequently, Marini and his wife became close friends with the Adamos. The Court briefly sketches the relationship:

"Mrs. Marini met Mrs. Adamo in May 1992 when they both lived on the same block in Manhasset Hills, New York. The Marinis and the Adamos became close friends, they are godparents to each other’s children. The families spent a considerable time socializing with one another and traveling together. In 2002, approximately 10 years after they became friends, the Adamos surprised the Marinis by unexpectedly joining them during a Caribbean vacation."

Adamo was a coin dealer and suggested that Marini invest in coins through him. Displaying less acumen as a coin buyer than he did as a flea market sweater wholesaler, Marini bought coins exclusively through Adamo over course of six years to the tune of 12 million dollars, and relied solely on Adamo regarding which coins to buy. Friendship notwithstanding, Adamo’s mark-ups were substantial. "[T]he highest markup of all occurred when Adamo purchased a 1888 $1 Morgan Silver Dollar in April 2003 for $200 and then sold the exact same coin to Marini in December 2003 for $100,000." Marini, 995 F. Supp.2d at 168.

In 2008, after finally consulting another coin dealer about the true value of some specimens in his collection, Marini sued Adamo for common law fraud, as well as for securities fraud, breach of fiduciary duty, and unjust enrichment, and prevailed at trial. But wait! After trial, defendant’s alert counsel notified the Court of some recent authority in his favor as to the element of "reasonable reliance"-- namely, an opinion dismissing a class action fraud lawsuit against a law school. The Court, however, was not persuaded.

"After post-trial briefing in this matter was complete, defendant[ ]. . . direct[ed] the Court's attention to a recent opinion . . dismiss[ing] a lawsuit by law school graduates claiming that the law school's publication of misleading statistics was an act of fraud because, inter alia, reliance on such statistics was "not justifiable as a matter of law, given the other sources of information that were available to plaintiffs." However, as the Court has noted, plaintiff[ ] reasonably relied on Adamo's misrepresentations because valuations for these coins was not readily available to an unsophisticated investor such as Marini; this information was certainly far more difficult to find than statistics on employment following law school. In any event, even if coin valuations were more widely available, Adamo is still liable under New York common law because, as discussed infra, he had a broader duty to speak because of his fiduciary relationship with Marini."


I do not want to address the murky subject of fiduciary duty as it bears on a common law fraud claim other to echo Paul Campos’s opinion that it seems odd and unjust that, although courts are willing to deem all manner of relationships to be fiduciary, they invariably find that a student-University relationship is merely contractual.

Rather, I note the Court’s statement that, during the relevant time, coin valuation was less readily available than accurate placement statistics for law grads. It is one of those very dubious distinctions that courts sometimes make to reach a just or desired result.

I mean-- during the time frame when Marini was buying all those coins (2002-2008) what sources of information on placement did law students have besides the law schools themselves and US News & World Report (which obtained much of its data from the law schools)? A coin collector, by contrast, had access to the famous "Red Book," "Black Book," and "Blue Book"-- three annual publications that estimate the value of every U.S. coin by date, mint, and condition. Plus there are are coin dealers galore that offer free appraisals. These sources may not provide the precise or reliable valuation for rare coins that harder-to-discover recent auction prices might, but they certainly offer ballpark figures.

Why did courts find that law students should have been more skeptical and informed, but not this coin buyer? Who is typically more naive and vulnerable-- a 22 year-old recent college grad or a multi-millionaire businessman? Maybe the court believed, without quite saying, that the behavior of the coin dealer was more depraved than that of the law schools. But is selling a coin worth $200 for $100,000 any less cruel or damaging than using inflated and misleading placement stats to peddle a non-first tier JD degree for $100,000+ --a degree that turns out to be worthless to a very substantial number of its buyers and that comes with huge opportunity costs and a real stigma in addition to the purchase price?

Adamo was a businessman and his goal was profit. Law schools, on the other hand, are mostly publicly supported institutions. Law students, and taxpayers too, should have been able to trust that these institutions would act in accordance with their expressed educational mission by modeling, as well as teaching, professional values and responsibility. Instead, law schools have demonstrated that the professional values that they really embrace, in contrast to their highfalutin’ mission statements and their cynical classroom and commencement day yapping, are those of a con artist.