Indiana Tech Law School: Not going down without a fight

Many of us were hoping that the central university would shut down the law school after one year in order to free the "charter class of 2016."  The school's ABA Required Disclosure page shows a pitiful 28 enrolled students, despite a goal of 100.  Its Dean recently resigned.  You can apply here.


Those 28 poor souls, however, are not to be so lucky.  In a thread at Top-Law-Schools that I recommend everyone read, Indiana Tech Law School is purportedly cold-calling in order to increase enrollment for the class of 2017.
Credit to TLS user CarolinaDreamer, who said he/she was e-mailed by the Indiana Tech Law School admissions (bolding was not done by me):

The faculty and staff at Indiana Tech Law School wish to congratulate you for your accomplishment on the June LSAT! We are still accepting applications for our Fall 2014 Class and we would like to take this opportunity to encourage you to apply now at http://www.LSAC.org. Tuition for Fall 2014 is Twenty-Nine Thousand Five Hundred ($29,500.00) Dollars, making us one of the most reasonably priced private (non-profit) law schools in the nation.

Preparations are well under way to welcome the second class in our new building and, most exciting of all, is our innovative, skills-based curriculum. Our goal is to prepare you to practice law at graduation, not after years of on-the-job training. More information about our curriculum can be found in our viewbook.

This year, our scholarships are based predominantly on LSAT score and will be distributed as follows:

If your LSAT score is within our scholarship ranges, we would strongly encourage you to apply; our application is free. If you have any questions about our program or application process please do not hesitate to contact our experienced admissions counselors at 1-855-TECHLAW.


The TLS user said that s/he just received the e-mail on Monday, July 7.  Assuming it's genuine, and it looks like it is (and another user in the thread claimed to have received the same e-mail), this shows that the powers-that-be at Indiana Tech are not throwing in the towel yet, and are sending out mass e-mails in order to try to bolster the numbers of the incoming class, as well as giving 1/3 tuition scholarships to someone who scored in the 25th percentile of the LSAT.

With discounts being handed out like adderall in the law school bathrooms during finals, it's hard to see how the Indiana Tech Law School is ever going to pay for itself.  How many sticker-paying sub 145 LSAT scorers (where the real $$$ is) can there be who want to go to law school in Indiana?  There is already an accredited law school in Indiana that is more than happy to take them, so it's doubtful that they will be that successful.

It is only a matter of time before the central university shuts the place down, but with $15 million sunk into the law school building, the CU may be hoping that things turn around.  Perhaps they believe that news of school becoming accredited will help right the ship.  According to LSAC, as of July 4, law school applicants are down 7.4%, and applications are down 8.6% from last year.  With local law schools offering stiff competition for the low-hanging LSAT fruit, there's little reason to think that Indiana Tech Law School can improve on the class of 2016's 28 members.

That leaves their main attraction to be the per-eminent expert on "Hip-Hop and the Constitution," Interim Dean and Professor andre douglas ponds cummings. 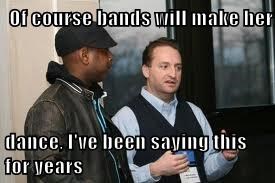