UPDATE (10/11/2013):  Paul Campos was kind enough to provide some clarification - JDHOPE27 was admitted to the AAMPLE programs at the Infilaw schools.  While this does not change the basic argument here, in an effort to be as factually correct as possible I make this amendment here.  Discussion on the AAMPLE program can be found here.
Much has been said about the Infilaw system already.  In short, it represents a possible "future," of sorts, for the law school education industry: as enrollment declines due to skyrocketing costs and grim prospects, organizations like Infilaw swoop in to consolidate individual schools into its member consortium (currently three, possibly four very soon).  Presumably they all gain access to shared resources and management, which in turn makes them more efficient and effective in their mission, or something.  I'm not entirely certain about the so-called benefits.
What is disturbing about Infilaw is that it is a for-profit enterprise, as detailed in the links above.  Not "for-profit" in the standard public/private law school way (as in "no, really, we're non-profit, see, really, just ignore the fact that we pay ourselves outrageous salaries and are exempt from income taxes and build new, giant buildings to attract new students and pay tithes to the larger university"), but "for-profit" as in "no, seriously, we're here to generate shareholder value, damn the student outcomes" sort of way.  While some for-profit schools in other disciplines have been vilified for charging high tuition and leaving their graduates with few to no prospects, nothing quite approaches the debt load of law school, for-profit or not.
Exhibit A of this brave, new world would be the case of JDHOPE27, which was brought up by a commenter previously and was, in my opinion, worthy of a separate post.
A huge disclaimer up front: I'm not knocking JDHOPE27.  When looking at his background he appears to be a non-trad, which if anything only makes me more sympathetic to his plight, as I too, once, was in similar shoes.  I wish him and others like him nothing but the best.  But, he does serve as an example as to what Infilaw is all about.  Below is a screen capture from Law School Numbers, as I wanted to preserve this particular case should anything be changed or deleted post October 1 2013. 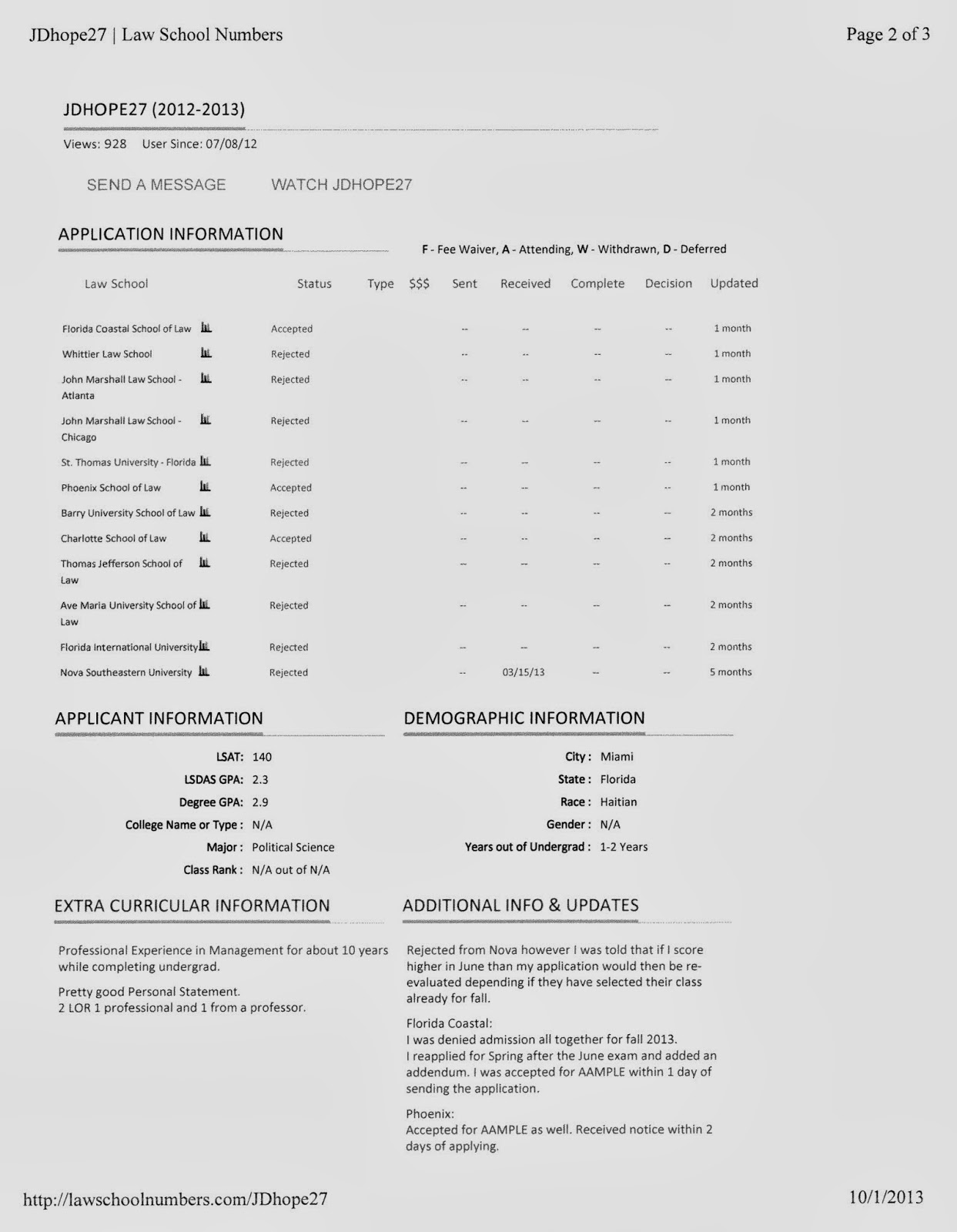 My point is a simple one: note that JDHOPE27 applied to twelve law schools.  His acceptances came from Florida Coastal, Phoenix, and Charlotte.  For those keeping score at home, these are the three Infilaw-affiliated law schools.  If you observe the profile for yourself, you will find that JDHOPE27 is now attending Charlotte School of Law.
There is really no way to comment on this further without it sounding like I am taking a swipe at JDHOPE27, which is not my purpose here.  I am, however, taking a swipe at Infilaw, in that the "non-profit" sector clearly made one decision, while the "for-profit" sector clearly made another.
If JDHOPE27 graduates, I hope he or she makes the best damn lawyer possible.  At the same time, 0Ls, beware.  As fewer and fewer students choose law school, realize that the law school cartel will begin to take on anyone who has a social security number, whether it is in the student's actual best interest or not.

I certainly count myself in among the "shouldn't have gone" crowd, and that was long before the for-profit law schools came to town.  Watch out.
Posted by dupednontraditional at 06:30