It appears that we will be clocking in around 62,000 applicants for the 2019 cycle given current projections.  Hopefully a significant number of these will be encouraged to move on to something else, as sometimes rejection only looks good in hindsight - ask some of the commentators here who realized after the fact they dodged a bullet.  Here's hoping that those who do remain have good prospects on the other side, though we here at OTLSS won't be holding our collective breath for that - with the Cartel stroking egos and selling snowflake-dreams, it is a siren-call difficult to dismiss. 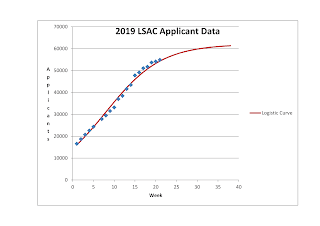