ABA Membership in Decline - "No One Saw It Coming" Edition 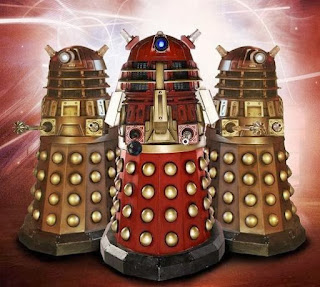 The ungrateful wretches refuse to join us!  Exterminate!  Exterminate!
For some reason, the ABA is experiencing a decline in membership and that is hurting operational funds:
Forty years ago, 50 percent of the lawyers in the United States were members of the ABA. The ABA currently has a 22 percent market share.
Speaking at the ABA Midyear Meeting in Vancouver, British Columbia, [ABA Executive Director] Rives said the ABA’s membership currently stands at 412,499 members, 70 percent of whom are lawyers. Another 26 percent are students and 4 percent including paralegals and international lawyers—are associates.
What is the near-term solution?
In the current version of the new membership model, there is a focus on bundling benefits and significantly simplifying ABA dues categories. Rives noted there are currently 157 dues categories at the ABA, depending on the types of work members do, their length of service and other considerations.
The model would reduce the dues categories down to three. Bundled benefits would include two sections, access to a CLE library and access to content that will be organized behind a member-only paywall.
Rives said the changes, which will require an investment in products and resources, are necessary in order for the ABA to remain a robust professional association and maintain its status as the voice of the legal profession.
Sounds good, simplification could indeed lead to cost-savings.  But this addresses the "how," not the "why."  The question remains - why do new lawyers not join the ABA?
Wait, OTLSS has a couple of ideas.  Could it be due to:
*  The "ethics" opinion that opened the door to overseas Legal Process Outsourcing?
*  The Failure to effectively accredit and regulate law schools?
*  Sucker-punching the small-firm and/or solo practitioner?
*  Protecting LawPrawf tenure?
*  Making it easier for less-capable students to enter the Law School Gristmill?
*  Failure to audit and gaming of employment results?
More below the fold:


What is this about, actually, really?
A later presentation by ABA Treasurer Michelle A. Behnke put a finer point on the membership decline, which has resulted in significant revenue losses for the organization. Even with deep cuts in the past year, the ABA’s operating deficit was $7.7 million for fiscal year 2017.
Behnke agrees with the adage that you can’t cut your way to a healthy organization. But she cautioned that the organization also can’t ignore the reality of the expense and revenue picture.
And while she praised the work of the ABA throughout the U.S. and the globe, Behnke said the revenue decline must reverse in order for the ABA to be able to conduct its mission work.
“No money, no mission,” she told delegates. “We’ve got to pay attention to our finances and take some bold steps to reverse our dues decrease so that we will be able to defend liberty and pursue justice.”
Ah ha.  "Mission work," "throughout the U.S. and the globe[.]"  What are these missions?  Going to the ABA website, the tab for "ABA Charities" seems the most on point.  The listed organizations are the Fund for Justice and Education, the American Bar Endowment, and the American Bar Foundation.  What do these organizations do?

Through the generosity of our donors, the ABA Fund for Justice and Education serves as the link between the ABA’s commitment to public service and its ability to produce programs that improve the lives of those we are entrusted to serve. These programs are divided among five main areas of concentration:
So, the FJE hits the high-points of what many Law Schools use to draw idealistic students into the fold - basically, the "Law School because Dolphins" argument.  While several of these topics are certainly important and deserve volunteer attention, there are several non-profits and foundations who consider these fields their primary mission as well, and, in some cases, are better at it.  As for the ABF:

The American Bar Foundation's mission...is provided by the American Bar Endowment...[and] is committed to broad dissemination of research findings to the organized bar, scholars, and the general public. The results are published in a wide range of forums, including leading academic journals, law reviews, and academic and commercial presses.  Our research program is implemented through the projects designed and conducted by the resident research faculty.

Ok, so the same thing Law Schools already do, in spades.

Which comes to the point - when people talk about their "love of the law," do they idolize being a PI attorney?  Do they wax romantic about construction liens?  No, of course not...its all about "international law," and "human rights," and "justice."  Not the nuts-and-bolts about being a dime-a-dozen attorney, although one could argue that the ABA's CLEs and Legal Sections try to address these concerns.
Except it's not working.  The rank-and-file sense the disconnect between mission work and work-a-day-work, and can tell the ABA favors the former.  To be fair, working to enact "liberty" and "justice" it is more satisfying than the daily grind - just look at superhero movies.  People generally want to be the hero making a significant change, not the bystander laying bricks because it needs to be done.  It's just that few have the luxury of being able to afford to be heroes, in many cases.

Wait, I've heard this story before, from somewhere - people pay a lot of money for no real gain, people stop attending, the low-hanging fruit has been plucked, revenues decline, interested parties try to get more and more non-attending-people to attend...in any event, turning back towards the rank-and-file membership, and supporting them in their seemingly mundane activities, may be what the ABA actually needs to be refocusing on.
Posted by dupednontraditional at 10:01