University of Kentucky Law Professor and filmmaker extraordinaire Brian L. Frye asserts that legal scholarship does not contribute to the cost of legal education

It is a relief to know that the cinematic arts are flourishing at law schools, along with the finest doctrinal instruction this side of a Gilbert’s outline and highly useful and enlightening scholarship that bears no causal relationship whatsoever to rising levels of student indebtedness.

One of the legal academy’s great auteur-scholars is University of Kentucky Law Professor Brian L. Frye. According to an endnote to one of his recent articles: "Brian L. Frye is an Associate Professor of Law at the University of Kentucky College of Law. His scholarship focuses on intellectual property, charity law, and art law. He is also an essayist and artist of no particular distinction." And the self-effacing professor does not even mention his two one-year post-law school judicial clerkships or the 27 months he spent as a junior associate with Sullivan & Cromwell before becoming a law professor.

Striptease might have been titled "Brian Frye Fails to Strip." We see Frye disrobe, but when he gets to his white undershorts, the roll ends in white flare-outs. There's also something strange about his movements, especially when he drops his shirt — because in fact he ran the camera in reverse while putting his clothes on."

It is galling that the hoi polloi persist in trooping to the multiplex to watch Star Wars, Episode Whatever, when gems like Brian Frye Fails to Masturbate remain comparatively obscure. At the very least, a minimally decent society will not fail to lubricate a genius like Brian Frye with an undemanding academic job and a $123,628 annual public sector salary, the better to facilitate his scholarly, as well as his artistic, ejaculations. Which is precisely what a young public defender failed to understand, in a January 15, 2018 exchange on Twitter, when she rudely interrupted Frye's effusion of self-love with the less-than-enticing imagery of her $250,000 law school debt load.

Professor Frye explains to the insolent tweeter that legal scholarship bears no relationship whatsoever to law student debt, making the knock down point that he gets paid whether he writes or doesn't write. (A few quibbles about that below). Anyway, here is the Twitter exchange in all its naked glory: [N. I want to add that I do not know the identity of "Essential Employee." I stumbled on the exchange while researching another post] 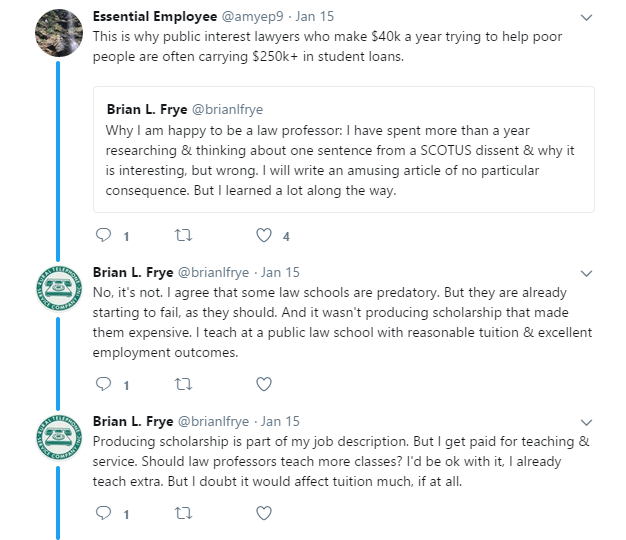 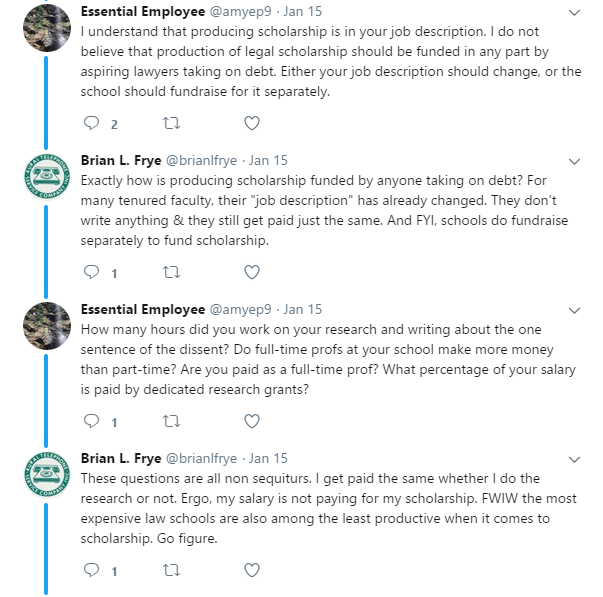 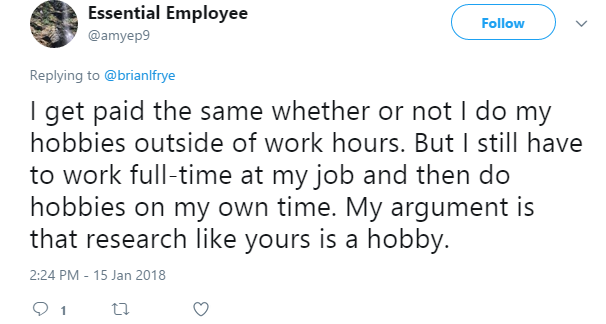 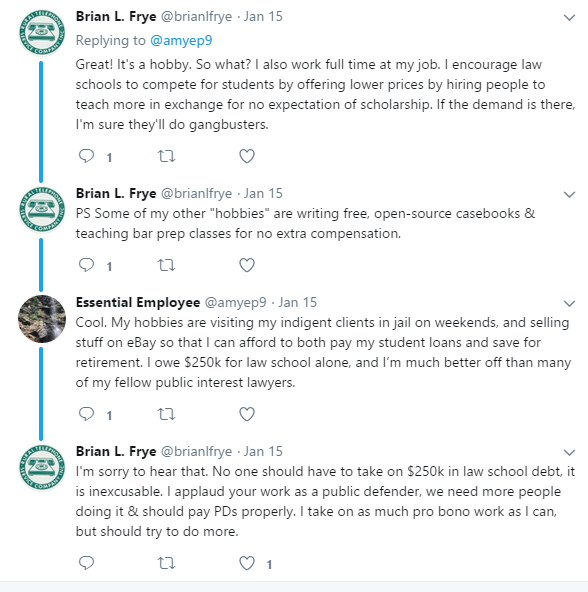 But wait, Professor Frye, or shall I call you Mr. Pro Boner?: Isn’t "engaging in scholarship" a major reason why the ABA mandates that the majority of law school coursework be taught by full-time law professors instead of far more affordable part-time adjuncts who, you know, actually practice law? (See ABA Standards 403(a) and 404(a)(3)). Isn’t this requirement fiercely defended against proposed modifications by law professor lobbying organizations? Don’t lawprofs routinely receive five-figure "summer research stipends" to top off their six-figure salaries, money expressly provided to encourage scholarship? Isn’t tenure in the legal academy strongly linked to scholarly production, as opposed to service and teaching? And don’t all these things add significantly to the cost of a legal education?

These would be my questions– pardon me, my non sequiturs– though I would never presume to match wits with somebody clever enough to deceive the world into thinking he is doing a striptease when he is really just running the camera in reverse while getting dressed.

See, for these films, he would not even have to run the camera in reverse.
Posted by dybbuk123 at 06:00