The Rooster Can Only Crow so Many Times... 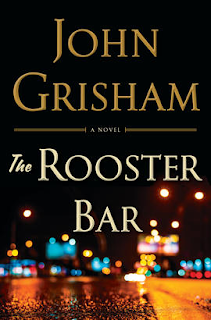 Grisham's 25th legal thriller, "The Rooster Bar," explores the world of for-profit law schools through a group of students who learn their school is owned by a shady hedge fund operator.
Grisham told "CBS This Morning" he was inspired to write the novel after reading an investigative article in The Atlantic about for-profit law schools and the crisis of student debt in the U.S.
"It was an investigative piece by Paul Campos published three years ago in The Atlantic and I somehow stumbled across it. I was not familiar with for-profit law schools and I was not really familiar with the student debt crisis. And the article really opened my eyes. It was a great piece but also a troubling issue and I started researching and the novel was quickly born from that."
"Not all the schools are shady. There are a lot of success stories from these schools, but the levels of debt that these students incur, and then they pass it off in the form of high tuition to people who are making a profit. That just struck me as being wrong."
Strangely, even a well-known author is able to look through the information and distinguish the nuance of the law school scam.  Too bad many ScamDeans, LawProfs, the ABA, and even some Judges, who are much more familiar with the details, are not able to do the same...
Posted by dupednontraditional at 12:27