Apparently Not an April Fool's Joke

Reported by ZeroHedge, from a WSJ article apparently behind the pay wall:

In an opinion filed Thursday, Judge Carla Craig of the U.S. Bankruptcy Court in Brooklyn, N.Y., said bar-exam loan debt is “a product of an arm’s-length agreement on commercial terms” and doesn’t fall into the category of student loans that stick with a borrower who files for bankruptcy.

The decision, which is the most thorough recent ruling on the matter, contradicts the widely accepted notion that student loan-related debt can be canceled in bankruptcy only under rare cases of extreme financial hardship.

In her 20-page ruling, Judge Craig said bar-study loans were akin to commercial or consumer loans and weren’t an “educational benefit,” like a scholarship or stipend, and thus could be erased in a bankruptcy case.

The U.S. Supreme Court recently declined to hear a case that could have made it easier to get rid of student loan debt. The White House, however, said last year that it would examine whether it should be easier for student loans to be canceled by bankruptcy, opening the door for student debt made by private lenders to be treated on par with credit-card debt and mortgages.

“We’re starting to chip away at the absolute immunity of student loans from bankruptcy,” said Austin Smith, Ms. Campbell’s lawyer.

A Citibank lawyer declined to comment on the ruling or to say whether the bank plans to appeal.

An interesting development for interesting times, to say the least.  While I am a general fan of ZeroHedge and use their data and arguments at times, they are also well-known for their caveat-emptor view of the world. Read the comments at your own risk, although there is some interesting side discussion about wage pressure on STEM fields and H-1B Visas and other items if you work your way through.

More importantly, this is an initial shift away from "everything is a school educational purpose so it's non-dischargeable so pay your debts deadbeat slacker people born after 1970" rhetoric that we tend to see.  The TJSL's of the world may be able to escape allegations of fraud, but even they can't escape market forces, and this is just one small additional piece of evidence to that fact.

While ZeroHedge doesn't have much time for individual plights, they do attack the systemic issues head-on, especially where a Canadian educator "comes clean":

I teach mostly bored youth who find themselves doing something they neither value nor desire—and, in some cases, are simply not equipped for—in order to achieve an outcome they are repeatedly warned is essential to their survival. What a dreadful trap...[b]ut don’t worry—you won’t go bust because of this failure, not in the modern university. So long as your class is popular and fun, you’ll be favoured by the administration and probably receive a teaching award. This, even though your students will leave your class in worse condition than they entered it, because you will have pandered to their basest inclinations while leaving their real intellectual and moral needs unmet.

"A system that piles debt on students in exchange for a marginal or even zero-return on their investment is morally and financially bankrupt," concludes ZeroHedge.  Well said, given the skyrocketing inflation in tuition, of which law schools are major offenders.  We of the scamblog camp have often warned about cynicism on the part of law school ScamDeans and LawProfs, and their view of students as so much student-loan-conduit cattle.  Sadly, the attitude has become infectious. 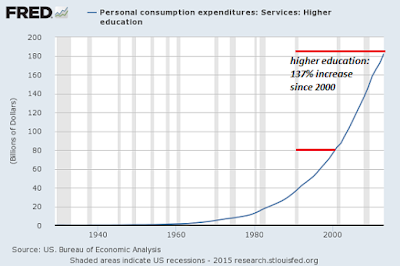 
As discussed previously, some law schools are beginning to face facts, albeit slowly.  Let's see where it all goes.