The Latest from LSAC

Following LSAC charting shenanigans is part of my hobby here at OTLSS, as so much discussion seems to hinge on this data and its implications.  While I appreciate the fact that LSAC gives us raw data, their interpretation of the data is always a bit puzzling.

So far, we have the following raw data comparing 2014-2015 to 2015-2016 (weeks are the numerical week where the data is reported by LSAC, with week zero being the week of the first date of reporting for the new cycle): 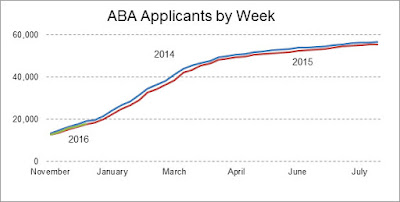 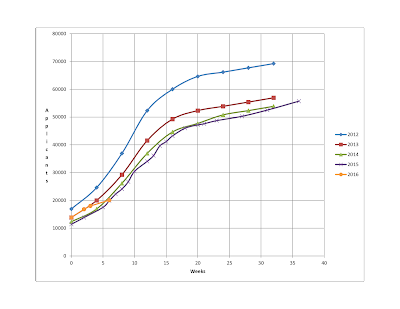 
First of all, I would have given LSAC far more credit than they reported in week "zero" and week two.  There seems to be a large difference between 17.8% and 0.6% of even 3.4%, but hey.  Interestingly enough, the initial data also tracked what I had previously for 2013 BEAUTIFULLY, almost algorithmically, dare I say, prior to Week 6. Again, interesting, but possible, I guess.  However, LSAC's compressed chart makes all of this very hard to see, which is also a curious choice given the tendency to not reflect the data accurately in the chart.  Perhaps the Week 6 "swerve" of 2016 into 2015 territory will right itself more towards 2013 again, but only time will tell - at least my percent differences and their percent differences track in recent weeks, so that is reassuring.

Second of all, a more interesting turn of events seems to be happening in my Applications vs. Applicants chart: 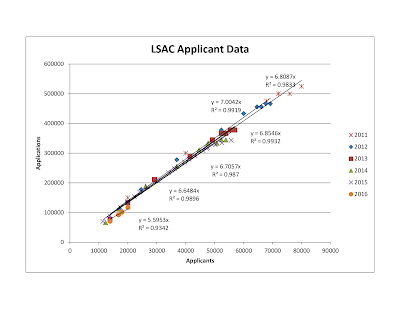 For several years now, you could count on the average applicant filing seven applications.  Now, we appear to be strongly on course for 5.5 applications per applicant, a significant departure.  This would indicate that applicants are being much more selective in their choices, for various reasons, rather than having "safety schools" or taking a scattershot approach.  Clearly there has been some psychological shift, and if the trend continues to hold true it will be interesting to see what else occurs in the future.

Until next time, keep up the good fight, and let's see how the pro-law-school-crowd responds.