Part of the vitriol from the Law School Cartel towards those that would have the temerity to question specious claims and ask for proof of the same (a/k/a the much ballyhooed skill of "thinking like a lawyer"), concerns the value of a law degree in the marketplace, and the ability to actually do the thing the degree purports that one be able to do, should one obtain said degree in the first instance.

Certainly, this is a challenging question.  Some studies have been attempted, and others purport to advance their own analysis, but the paucity of strong, reliable data makes answering this kind of question all the more difficult.  One cannot quickly order up a statistical sample in the laboratory, run a series of double-blind tests, and analyze the results.  The "laboratory" in this case is in fact the Real World (tm), and the tests are being run now, in real time (neglecting the contributions of relativistic effects, as we can all safely assume that were are within the same reference frame).  We are forced to wait, therefore, for the actual results, which takes decades to unfold.

In the meantime, we have to scrape by with logical inference (another "thinking like a lawyer" skill). Law School Transparency was recently lambasted for the conclusions it has tried to draw from past historical data, that law school is not a productive choice for many.  As financial institutions are quick to point out, "past performance is no guarantee of future results," and I believe LST would concur.  LST also points out that while its conclusions are based on available data, there are many (cough cough) who could readily provide more accurate data in refutation should they choose to do so.  Strangely, the voices in-the-know remain silent on this issue, but I'm sure LST would be happy to revise their conclusions should strong data present itself.

More below the fold.

In much the same way, there are other indicators that would demonstrate now is not a good time to go to law school.  I submit the following chart from Matt Leichter: 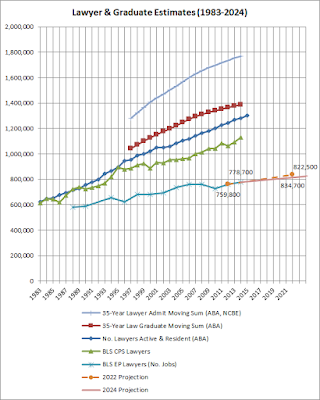 First of all, these are not numbers picked out of the air, but the ABA's own information.  One immediately notices that the 35-year moving sum of admitted lawyers far exceeds the 35-year moving sum of law graduates, which in turn significantly exceeds the number of active lawyers for the same years.  This is not hand-waiving.  This is not manipulation.  This is the mere-est of the mere when it comes to observation, and is a skill largely garnered in late elementary school when it comes to interpreting graphical data.

Note also the Bureau of Labor Statistics' line for available lawyer jobs, along with future projections.  It's easy to find; it's the lowest line on the chart.   To say that this line and the foregoing lines are "not even close" is a bit of an understatement.

Adding additional data, it would appear that "hanging out a shingle," the favorite of quick retorts to the emplyoment crisis within the profession, would be at risk as well.  Generally, pursuing this option is known by other fields as being "self-employed."  According to additional federal and private data, self-employment has been on the decline for a long time now.  I don't know this for certain, but I have to believe there are at least one or two solo-wannabes in that chart somewhere, if not more.  Further, the birth rate and death rate of "firms" appear to have cancelled each other out, and that there are increasing numbers of job seekers looking for fewer and fewer jobs in this non-expanding number of "firms".  Again, while this chart does not say "Law Firm Births and Deaths" but "Firm Births and Deaths," I again have to believe there is a Dewey & LeBoeuf or two in this data. 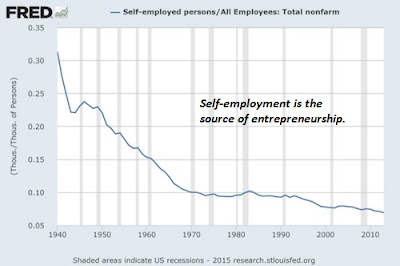 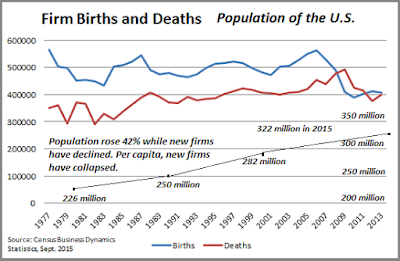 Does this mean that there is no hope at all, ever, for JD graduates?  Of course not.  These are all large numbers and trends, and like any statistical measure, the outcome of one individual is not governed by simple prediction.  There are individual circumstances that may greatly affect one outcome as opposed to another.  There are plenty of print resources for starting one's own practice, and I remember JeffM's guide on jdunderground being particularly useful to many a few years ago.  If someone can add an active link in the comments, that would be great.

UPDATE:  This link should work.

That said, while one cannot predict both the velocity and position of any one helium atom in a balloon, one can indeed predict with significant accuracy the actual pressure generated by quintillions of helium atoms all interacting with each other statistically in the same balloon.  In much the same way, it is a supremely reasonable inference from the above, and other sources, that there is significant "pressure" on JD graduates, that the market is terrible, and the rent is just too damn high.

While the Law School Cartel is happy to try to poke holes in theories in order to advance their own dubious agenda, they remain silent when it comes to the data of the big picture.  They try to treat graduates an individuals rather than a collective market, as if there are no other interactions or forces at play in the world except individual grit and determination.

Grit and determination, I note, that they are asking Others to exhibit, and not of Themselves, in order to draw a paycheck.

Which, in turn, plays into the Cartel's best interests - not yours.