Washburn and the Solo Sub-Scam

Recently, I ran across this article, entitled "Washburn Law Grads Ready to Practice."  Normally, this is the sort of benign PR poop that one lets slip past the radar of eyebrow raising.

But it's hard to ignore some bold claims:


The law school ranked 24th nationally in employment in full-time, long-term jobs requiring bar passage, according to 2015 American Bar Association data — above all other law schools in Kansas, Colorado, Oklahoma, Texas and Arkansas.

“We are pleased that our graduates are among the nation’s most successful in securing full-time, long-term jobs that require bar passage. This is the gold standard of jobs for lawyers,” said Washburn law school dean Thomas R. Romig.

Lest you think this is just puffed-up journalism, when I went to the school's website, I found this rather loud banner:

Twenty-fourth in the country sounds pretty impressive...until you look into the actual numbers.  Let's look at Washburn's 509 data for the Class of 2014 (copied from LST):

Fourth in the country high.  Check out this list:

PERCENTAGE OF SOLOS TO GRADUATES


I wonder if this is the esteemed company Washburn wants the public to see it associated with.

There are other problems with Washburn's claim regarding its stellar employment results, the most notable being that Washburn placed only 12.5% of its graduates in law firms of 11 or more attorneys, whereas Kansas placed 20.2%, Oklahoma placed 20.9%, Arkansas placed 21.7%, Colorado placed 24.2%, all in said categorization, and Texas placed 25.6% of its class in firms of 500 or more alone.

Under Law School Transparency's Employment Score method (which justifiably excludes solo practitioners), Washburn ranks 107th in the country. So it appears that Washburn is using its solo numbers to inflate its employment rate over clearly superior schools when calculating its "24th in the country!" claim.

But what is it when a school apparently counts solo practitioners as "employed" or in a "position," much less one that is long term?  Is that even technically true?  A solo practitioner isn't employed or holding a "position," and I would bet that most don't last more than a few years before doing something else.  A solo practitioner is an entrepreneur at an uncertain start-up, almost always carrying additional business debt and negative operating costs until business picks up and large up-front expenses can be paid down. To compare it to an associate position in a firm of 20+ attorneys is disingenuous, at a minimum.

The data is pretty clear that prospective law students generally don't want to be solo practitioners immediately if they have a choice, and solo practice for new graduates is likely a symptom of low employment prospects rather than any conscious expression of being "ready to practice."

The following chart shows the percentage of recent graduates going solo versus the median LSAT score of the school's most recent incoming class. (Lincoln Memorial and the Puerto Rican schools were excluded.) 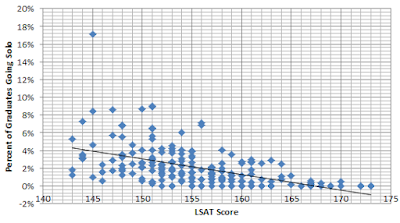 As you can see, as the median LSAT score increases, the percent of those graduates who wind up going solo out of law school would be expected to decrease.  The inferences here would be that 1) very few graduates are apparently turning down more stable, better-quality jobs to go solo; and 2) either lower-quality applicants are more inclined to go solo than higher-scoring peers or they're feeling more forced to do so out of economic necessity.  I'll let the reader choose one's own adventure on that riddle rather than baselessly speculate that it's the latter.

This is somewhat troubling, of course. Sometimes, law deans will celebrate students for going solo out of law school, even building programs to promote it, and indeed there are some who can manage it.  But they're a minority, and if anyone is going to go solo, the world would likely be better served if it were students with better incoming LSAT and GPA scores.  Does the eager 150 LSAT really understand the limits of his own ignorance, particularly when some gushing law dean has been pimping the idea? Can he become an expert practitioner on his own as easily as his rival with an in-house mentor?

Shouldn't law deans, particularly those who worry about bar passage rates, be discouraging most people from going solo out of school?  Instead, if schools are allowed to count solos as "long term employed" and get away with it, law schools have an incentive to pump as many of their recent graduates into solo set-ups as are willing to take the bait, whether those students are ready to start a business in a saturated market or not.

I don't mean to be down on solo practice, other than to say I think it's borderline insane for most recent graduates with very limited practical experience to jump into a mucky pond where twenty-year practitioners can struggle to get good clients.  If you can make it, good for you.  That means you had skill, money, and/or luck in some combination.

But what I know is that solos aren't "employed" and such a path isn't what the overwhelming majority of law school applicants pictures as a good - or even viable - career option nine months after graduation.  For law schools to continue to lump those numbers into their employment figures and sell the school as being excellent at "placing" graduates anywhere is blatantly dishonest.

That seems like a sub-scam, friends.  Give these folks the slightest angle to turn poop into the 24th best placement rate and they're going to do it.
Posted by Law School Truth Center at 11:00