A Lesson in Moral Hazard from New America

Hello everyone.  Between bar prep over the summer, taking the bar, and hustling trying to get a full-time, long-term, bar passage required job, I haven't had much time or motivation to post.  However, with bar results from my state coming in soon, and a probable full time legal job awaiting me if I pass, posting on OTLSS can help calm my nerves.

Back in April of this year, I highlighted a report from the New America nonprofit policy institute on cumulative student loan debt for those who completed graduate programs.  New America found that debt among law school graduates increased by $50,000 between 2008 and 2012, a shocking amount.

New America (NA) is back with a report focusing on income based repayment programs, posted earlier in September.  The full report is here.  The summary is here. In the report, they focus on what they call "New" IBR, which is the more generous version that the Obama Administration recently implemented.

Because what borrowers repay on their loans in total (for "New" IBR/PSLF) is largely a function of their incomes, not necessarily the amount they borrow, we can . . . find the level of debt at which borrowers with certain graduate and professional degrees cease to incur any increases in future loan payments if they borrow an additional dollar.  Taking on more debt at that point increases only how much debt is forgiven after 10 years; it does not increase monthly or total payments.  We call this . . . ZMCT.  p. 10.  Italics are my own.


In other words, by taking known variables: student loan debt and income, NA has been able to calculate the point where a graduate of a certain program at a certain income level post-graduation will not have to pay an additional dollar on loans they incur past said point.

Anyone with a working knowledge of trends in JDs' debt levels and the bimodal distribution of entry-level JD salaries should be able to figure out that anyone at most debt-levels will be able to qualify for forgiveness under the newer, more generous, IBR, as well as PSLF.

While this isn't a shocking realization for many of us, it might be for well-intentioned but misinformed legislators.   NA reports that, for instance, that

a teacher with a master's degree who borrows typically leaves school with $42,000 in federal debt . . . If he earns at the 75th percentile for his age over his first 10 years of repayment, he will have $32,711 forgiven.  In other words, a teacher with a master's degree who has a typical debt load, who earns an above average income, has over $30,000 forgiven under New IBR and PSLF. p. 21.  Italics are my own.


NA goes on to theorize that "having at least $30,000 forgiven if you are a teacher with a master's degree stands to become the norm," if you are savvy enough to make use of the generous federal programs.  As it stands, according to the US Department of Education, the number of borrowers using income-based repayment programs account for 11 percent of borrowers and 22 percent of the Direct Loan portfolio in repayment. p. 23.

It is not a stretch to assume that the numbers using these plans are going to increase.  NA names names for two organizations which are hawking income-based plans: The Advantage Group (a consulting firm) and Georgetown Law.

The Advantage Group boldly states on its website that income-based plans including IBR and PSLF can "forgive tens, even hundreds of thousands of dollars and allow graduates to live the life they imagined when they first enrolled in school."

As to Georgetown Law, Professor Campos noted that Georgetown was tying its LRAP program to IBR in 2012.  NA also calls out Georgetown for "aggressively market[ing] the benefits of its program to current and prospective students with seminars and other materials."  p. 23.

At this website in 2013, NA posted several videos from a seminar Georgetown Law conducted on the generous benefits its graduates can receive from income-based repayment programs.  In the videos, Georgetown Law employees tout the benefits of the programs, going so far as to state that one can "ignore the fact that you have six digits of loans."  Georgetown employees also said that BigLaw slaves will be eligible for such programs, while acknowledging that they are not the programs' intended beneficiaries.

As I imagine even the most liberal among you find Georgetown Law's and The Advantage Group's cheap tactics and bluntness to be disgusting and offensive, imagine how budget-conscious Republicans such as Paul Ryan are going to respond.  It's no surprise that Georgetown removed the videos from its website after NA published a post on the Higher Ed watch blog regarding the program.

Without further ado, here are the ZMCT figures for PSLF for lawyers.  NA finds that the "Lawyer with Typical Income" makes $59K their first year in the workforce, and $121K by their tenth year in the work force.  p. 14.  Feast your eyes on NA's calculations, on page 14 of the full report: 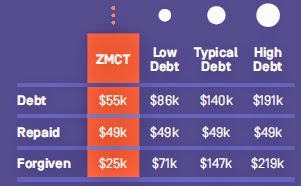 A lawyer earning at the 50th percentile with that debt level stands to have $147,282 forgiven, which is more than he borrowed, due to interest accrual . . . p. 21

As to those at the 75th percentile of earnings:

"A lawyer who has median debt for law graduates and earnings at the 75th percentile of all lawyers, not just those working in PSLF-qualified jobs, and the amount forgiven jumps to $98,751.  A lawyer earning at the 75th percentile has some of the highest earnings among all professions, yet New IBR and PSLF provide benefits large enough that high earnings will still result in nearly $100,000 in loan forgiveness for typical levels of debt . . .

Finally, thanks to NA, we can put numbers to the obvious moral hazard that the federal government has created, and what graduate schools and students have gleefully begun participating in.  Whether or not you fully agree with some of NA's assumptions and methodologies, such as setting the household size to one for the first five years of repayment, and two for the last five years, and using 2011 dollars, the data is useful in crafting arguments on why the current situation is untenable.  p. 7.

If tuition returned to levels that didn't require graduates to incur a "typical" debt of $140,000 of high interest, non dischargeable, student loans, a program with such perverse incentives would never exist.  Programs like this do not create incentives for law professors and deans to think of ways to minimize the amount of debt that their graduates incur.

Let's go back to Georgetown Law for a minute, and speak in broad strokes.  Their LRAP program is based on income-based repayment programs, where the law school will pay a qualifying graduate's reduced monthly payments.  Thus, a student could optimistically borrow $140,000 in student loans to attend Georgetown Law for three years and a T14 JD.  The student could go into a qualifying job, with, say, a $59,000 starting salary,  and Georgetown Law would simply use $49,000 over ten years to repay that graduate's debt!

$49,000 isn't even the cost of one year for tuition and fees alone to attend Georgetown!  Why wouldn't prestigious institutions such as law schools climb the nearest mountains and shout how good of a deal it is to attend law school right now under those conditions, other than to not incur the wrath of politicians and taxpayers who may not agree that the current price structure of graduate school education was inevietable.

The intentions behind such income-contingent programs were good: students motivated by public service could still attend school and handle their loan payments with help from the understanding taxpayers.

Now, the spirit of such principled intentions is gone, as BigLaw drones can also benefit from the program, and the debt amount that the taxpayer foots may be higher than the amount the graduate student borrowed in the first place!  A "prestigious" law school like Georgetown can create a malignant scheme where taxpayers pay for 3 years of living expenses and two years of tuition for its graduates.


What does this mean to prospective law students and law school professors and deans, hoping to cash in for a few more years before the reckoning sets in?  The morally hazardous income-contingent repayment programs are exposed for what they are, and are in the cross-hairs of politicians and public research institutes alike.

Hell, the Obama administration, not known for its restraint in protecting the Federal Treasury, proposed to cap PSLF at $57,500.  Go ahead and read the HuffPo piece I just linked and see the perverse incentives that NA outlined in action.


The clock is ticking for IBR, Old IBR, New IBR, Georgetown IBR, and whatever other income-based repayment programs there are out there, sucking at the taxpayer teat.  As more voices join New America's in creating a chorus for reforming the way America funds higher education, change is inevitable.

Georgetown, The Advantage Group, and every "non-profit" institution that benefits from charging students ridiculous prices for diminishing returns, the good times are just about up.  Until then, the scam continues.