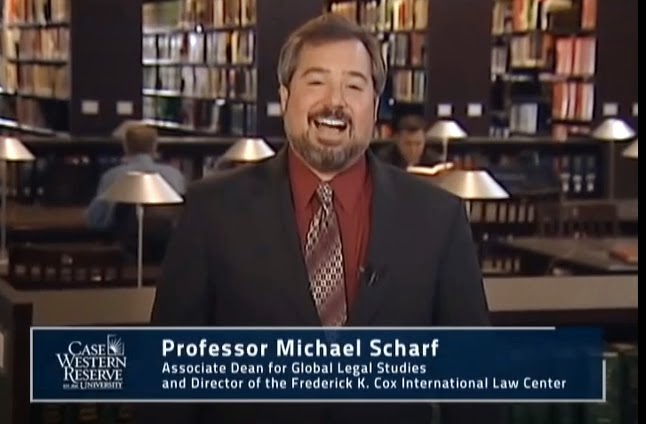 Michael Scharf recently became co-interim Dean of Case Western Reserve University School of Law in Cleveland, following the resignation of that outspoken law school shill and, uh, notorious ladies’ man Lawrence "Train Wreck" Mitchell. Scharf is a creditable scholar and practitioner of international law. According to his CV, Scharf worked for the State Department for five years as an attorney-advisor, and he cofounded an NGO that provides pro bono legal advice to states and international institutions on such weighty matters as peace negotiations, constitution drafting, human rights, self-determination, and war crimes prosecutions.

But watch Scharf’s performance in the remarkable seven and a half minute long recruitment video linked below. In the video, Scharf and several faculty colleagues try to persuade an intended audience of prospective law students that a Case Western Reserve JD is the key to the jet-setting job of their dreams. Without being overly harsh, I would say that Scharf looks like an overfed wolf in a burgundy dress shirt, with a huge self-satisfied toothy smile that only he believes is ingratiating, trying to sell straw homes to piglets. And the other faculty come across as similarly sleazy despite their credentials and soft voices. It is another example of how legal academia turns decent people into predators.

A.  Selected quotes from the video by Case Western Reserve law faculty advising that Case is the place to embark on a career in international law.

Scharf: "We hope you will come to Case, so we can help you launch your career in international law."

Prof. Jessie Hill: "This year, a national survey of law professors ranked Case Western’s international law program as one of the top in the country. Our program attracts students from around the world to study here and they graduate with international law jobs across the globe."

Scharf: "Case’s international law program has a four million dollar endowment... with this money we provide students summer, semester-long, and post-grad internships grants to help them break into a job in international law."

Prof. Juscelino Colares: "I teach international trade and other courses in international business and regulatory matters. I was born in Brazil, but I’ve studied and practiced law in Brazil, France, and the United States, and am living proof that a career in international law can be both professionally gainful and academically exciting."

Prof. Cassandra Robertson: "I teach and write about international law in US courts. Case Western is on the cutting edge of this very fast growing area of practice.”

Prof. Timothy Webster: "With exchange programs at six of the most prominent Chinese law schools, Case Western is a leader in preparing students to do legal work in this fast-growing area of international law."

B. Case law student on video: "I came to Case because I heard if you want to work abroad Case will make it happen."

Case Western Reserve Univ. School of Law apparently does obtain lots of foreign externships and internships for its students, as well as study abroad opportunities. On its website, Case boasts that "In the past 5 years, 155 Case law students interned at 98 placements in 37 countries. Our exchange partnerships expand each year. We now have agreements with 25 top foreign law schools." On the video, one hears enthusiastic and attractive law students, as well as Case faculty, gushing about the following internship placements and other programs abroad:

The only minor problem is this: How many of those internships lead to actual international law careers?

An internship overseas is a heady experience, I am sure, but also one likely to add to those collossal debt loads and exceedingly unlikely to lead to a paying job abroad or a real career in international law, no matter how persuasively self-interested professors yap about "this fast-growing field." Indeed, given the numbers above, a more realistic way to break into international law might be to borrow $266,125 and bet it all on a 20-1 shot. If you win, become a big-money political donor, and then apply for an ambassadorship.

Yet Scharf, with that wolfish smile of his, informs us that "nearly half of our students picked Case because of their interest in international law" and advises that Case is where students should come to launch their careers in international law. What we have here is a Case of scam.