“How come virtually every lawyer I know appears to be making at the least a decent living? I also know many who are self-employed and year after year knock it out of the ball park.”

I saw this comment to one of my prior posts, but it’s taken me a while to get around to writing about it.  The author of the comment is somewhat puzzled at the difference between the message we’re sending (law school does not often lead to success) and his own personal observations (virtually all of the lawyers he sees are all successful.)  And the logic, or lack thereof, shown is exactly the reason why schools like Indiana Tech continue to attract students.

So let’s put this myth to bed once and for all.  (Although it seems to be a myth that’s like a three year old kid on Christmas Eve – you put it to bed but an hour later it’s creeping down the stairs, so you put it to bed again but then another hour later it’s back on the sofa between you and the wife, then again you put it to bed and at three in the morning, just when you thought it was finally resting, it’s at the foot of your bed asking you whether it’s time to go to law school yet.)


The reason the commenter is observing “virtually every lawyer” he knows “making at least a decent living” is because he’s looking only at successful lawyers.  He’s ignoring the huge numbers of unemployed lawyers, lawyers too poor to advertise, part-time lawyers, underemployed lawyers, JD grads who left the profession, and the countless law grads who never even became lawyers in the first place.  He’s observing a select subset of all lawyers rather than observing all law graduates.


All successful lawyers are law graduates.


I am a law graduate.


Therefore, I will become a successful lawyer.

If you are reading those three statements and thinking, “Yes, that makes sense,” then you’re about to unwittingly make the biggest mistake of your life.

So where do all the unsuccessful law grads go?

Let me give you an excerpt from Con Law which might shed more light on this matter:

The most important, untapped source of information are the numerous law graduates who fail to obtain any legal job, or who choose to leave the profession altogether. (The former is, of course, a prime driver of the latter.) It is these “ex-”attorneys you should seek out; many currently-practicing attorneys have little insight into what happens when law school goes wrong. . . . Attorneys with good jobs these days are not average; they are those who have either lucked out in graduating before the crash and escaped downsizing, or they’re the tiny minority of top-performing students from a top-ranked law school—or their uncle is a name partner. Either way, they’re hardly going to give you the real scoop.
. . .
The most valuable information about the profession is obtained from those who have left the profession, or who are on the verge of leaving, or who never managed even to get a foot on the lowest rung of ladder to be able to then leave. Whether they might have done better under different circumstances or not, the job market fell out from under them. If you really want to know the downsides to going to law school, now—or a career in law, now—ask those who went, recently, but who aren’t there anymore. Figure out why.

Observing a select subset of law graduates (and lawyers are a select subset) leads to some odd results.  Clearly, it allows otherwise-intelligent people to make the kind of statement I quoted at the start of this post.  Similarly, “Lawyer Satisfaction Surveys” are by definition generally only surveying lawyers, who are happy enough with their career choice to remain practicing law, and those surveys don’t reflect the massive dissatisfaction from the countless lawyers who left the profession in disgust, who were forced out by underemployment, or who never got a foot in the door in the first place.  Likewise, career statistics collected by law schools generally reflect only those recent grads who are proud and successful enough to report their data to the law schools, and don’t reflect the high numbers of unemployed, low-paid, or underemployed grads who prefer to keep their “failure” a secret (although their lack of success is in no way their own fault and they have nothing to be ashamed of.  In fact, I would argue that they have a duty to expose their lack of success to make sure that others don’t fall into the same trap, but that’s another post.)

So be careful with observations about lawyers, and be careful about what conclusions you draw from those observations, because you may fall into the trap of ignoring the huge numbers of law grads who don’t even show up on the radar because they were discarded by the profession or who prefer to remain hidden.  And don’t forget that there’s a good chance that you’ll end up in that same group of discarded or hidden grads.

I’ve drawn a little Venn diagram to help you figure this out.  In the universe of JD grads, there are two subsets, lawyers and non-lawyers.  And in the subset of lawyers, there’s a sub-subset of successful lawyers.  Law schools want you to see only that red-shaded sub-subset and come to the conclusion that you’ll automatically be in that group - Indiana Tech Law School and your buddies sitting on the back row of the classroom, yes, I'm looking at you.  The universe of possible outcomes from a JD that you should be looking at lies in the red, blue and green areas of the diagram combined, because only that represents all the possible outcomes from your investment in law school.  If you're doing your pre-law research and not speaking to non-lawyers in addition to practicing lawyers, or if you're only speaking to successful lawyers, you need to rethink your process. 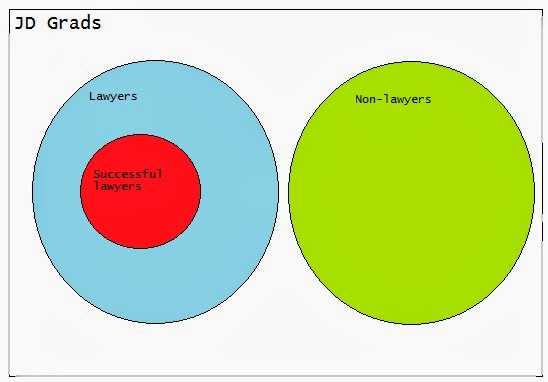 Charles Cooper is the author, along with Thane Messinger, of “Con Law: Avoiding...or Beating...the Scam of the Century (The Real Student's Guide to Law School and the Legal Profession)”, in addition to being the moderator at Nontradlaw.net and the author of “Later in Life Lawyers”.  He can be contacted at charlescooperauthor@gmail.com.