While there is a tendency to assume that law schools with bad bar pass rates are "bad law schools" in the sense of having bad teachers, or having an insufficiently rigorous curriculum, or having inadequate academic support and bar preparation programs, this is not necessarily the case.  Rather, the primary factor is the school's admissions policies, not the quality of legal education offered by the school.  As you can see on the table, with the exception of four California law schools, University of San Francisco, Southwestern, McGeorge and Cal Western, every law school on the bottom 25 list had very high risk admissions policies in place for their fall entering class of 2015 (when most of the 2018 first-time bar takers matriculated into law school).  By very high risk, I mean that at least 25% of the students that matriculated were at very high risk of failure, and at least 50% were at high risk of failure, based on the LSAT Risk Bands table I first published in 2014, and which has been repeatedly validates since.  I have argued that admitting any significant percentage of extremely high and very high risk students is unethical, irresponsible and violates ABA Standard 501.  At the very least, it is a recipe for disastrous bar passage rates.  Perhaps not surprisingly, as the chart also depicts, many of the schools on the list have either gone out of business, been placed on probation, or been sanctioned or had some form of remedial measures imposed upon them by the ABA at some point since 2015 (although some schools were later found back in compliance).

This pretty much says it all, although there is a nice summary chart below the fold.  Is it any wonder that Whitter, Valpo, and Arizona Summit are closed/closing?  That Appalachian, Golden Gate, Cooley (sorry, Western Michigan) and Texas Southern have been sanctioned? 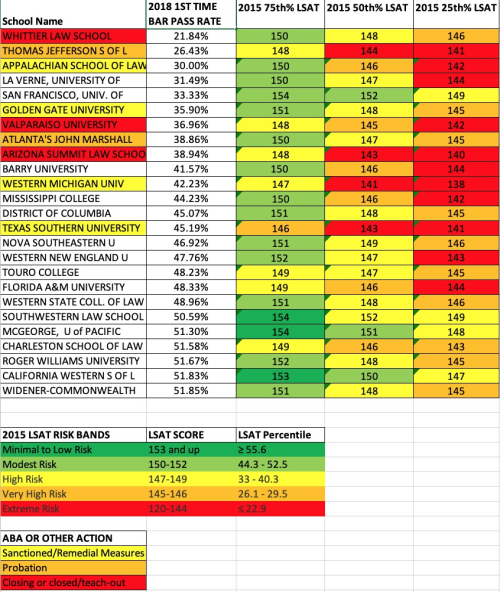 What is sad about this is that these schools, and many others who have managed to escape the wandering eye of regulators so far, were complicit in dumping thousands of graduates into the market for years with few to no prospects.  Graduates the market Did Not Need.  This negatively affects the outcome for all except the most preftigious and well-connected graduates.  And with rare exception, the majority of these schools are still allowed to do this.

In what universe is a LSAT score of 151 considered "moderate risk?"  Yet per the chart above, these results look like traunches of bundled students being sold.  "Look, while this CDO of future law students has a traunch of Extreme Risk students, its all OK because you also have traunches of High Risk and Modest Risk also!  So, it's fine!!!  These classes will work out overall, even though a few will have to get jobs at the Piggly Wiggly and will never have legal careers, while others might get a JD-Advantage job and few get, I don't know, actual "law" jobs."

0Ls, look at the data.  Look at the results.  While I will state this in harsher terms than David Frakt would do (which is fine), this is the Law School Cartel at work, putting profit ahead of outcomes. This is why we say "T14 or nothing."   Not because it is a guarantee, but because it is indicative of what is going on at large.  Enter at your own risk - in fact, don't go at all given the current circumstances.
Posted by dupednontraditional at 13:39