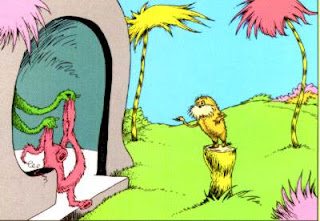 A-yup.  Totally agree.  Nice that people in-the-know are actually talking about it, instead of pretending like it didn't happen.  Where was this discussion previously, especially when Campos and Tamanaha were being called out, to say nothing of other scambloggers...?  Wonder if Nando saw this...

Kaplan's Thomas said that what many people in the legal education field now see is “a little right-sizing of legal education. If we have all these schools and not enough demand to satisfy them, perhaps it would be better off in the longer run if some of the law schools — particularly in the lower tier — did indeed choose to close.”

Hilarious.  A little "right-sizing."  I seem to remember a lot of push-back on this idea, previously, how everything is fine, how the scambloggers are losers, if you can dream it you can achieve it, etc. etc. etc.  I notice many usual-suspects LawProfs have been very non-vocal on this, compared to even 5-10 year ago.  And what about access?  How do you plan to defend liberty and pursue justice with fewer, count 'em, fewer law schools...?

Meanwhile, law school tuition has been soaring. According to data compiled by the advocacy group Law School Transparency, since 1985, tuition at private law schools has risen 270 percent, while tuition at public schools has risen 580 percent after accounting for inflation. Average tuition now stands at $47,000 at private schools, $27,000 for public in-state students and $40,000 for public out-of-state students.

If you go with the assumption that costs double every twenty years, law schools have been making a hefty profit way above even that rule-of-thumb, all along the way.  Because the law is "dynamic" and "ever-changing," don'cha know.

“People have long viewed a legal education as a ticket to financial security,” McEntee says [sic]. “And that just wasn’t the case. Not only did a substantial number of graduates not actually become lawyers, but then once you do become a lawyer, not all the salaries are commensurate with what you might expect if you get your information from the news or TV or movies.”

McEntee pointed out that fewer than 70 percent of today’s law school graduates land jobs that require a J.D. and passing the bar exam — the legal jobs that tend to pay the highest salaries. Several decades ago, the proportion was above 80 percent.

Ah well.  Pay no mind, nothing to see here, move along.  Just dive-in, 0Ls, the Law School Cartel has nothing but your best interests at heart.  The mean, mean scambloggers just want to thin the ranks so as to have less competition in their lucrative legal careers.
Posted by dupednontraditional at 11:13 45 comments:

We may be witnessing the ninth closure of a law school in recent years. Über-toilet Western State College of Law, located in Irvine, California, fell into the clutches of Dream Center, "a faith-based nonprofit" that appears to be serving God and Mammon. The subsidiary Dream Center Education Holdings bought up dozens of private institutions of so-called higher education all over the US, including Western State, but has lately fallen into federal receivership. Congresswoman Katie Porter, herself a professor of law at UC Irvine, accuses the Dream Center chain of having "defrauded students … across the country"; she vows to hold "these con artists" accountable.

The students at Western State have not received the financial aid that they have been awaiting since January. Some $9 million in funds to "Argosy University", which includes Western State, have vanished. Many students cannot cover living expenses such as rent and food.

Dream Center bought Western State just over a year ago but has been disappointed with an alleged shortfall in revenue. Porter, to her credit, pulls no punches: "Predatory actors like Argosy have been given free rein by the Trump Administration and Education Secretary Betsy DeVos to make a quick buck at students’ and taxpayers’ expenses. The Department of Education has taken aggressive steps to deregulate for-profit universities, encouraged institutions to lie about their accreditation statuses, and left students vulnerable to fraudulent groups." I wish her every success in her efforts to stop the higher-ejookayshun scam in general and the law-school scam in particular.

As for the students, I'm afraid they have only themselves to blame. They should have expected a bad result from their über-toilet, even before it was bought out by this god-bothering non-profit outfit. The median LSAT score is 148, more than a quarter of the graduates are unemployed ten months after graduation, and the debt-financed cost of attendance stands at $282k.

Western State, it seems, cannot be long for this world. When it does go tits up, any remaining students should look into their rights to walk away from their debt. The public shouldn't have to pay for their folly, but they would be stupid to double down by transferring to another über-toilet.

Applicant Update : Applicants up 0.9% per LSAC, Applications down compared to last year

Well, this is a completely unexpected result.  What started off as a strong showing for the current cycle has since petered-out into a rehash of last year, if not more so.  To be fair, I would argue that the year-to-year comparison is 3% above last year as opposed to 1%, but the fact remains. 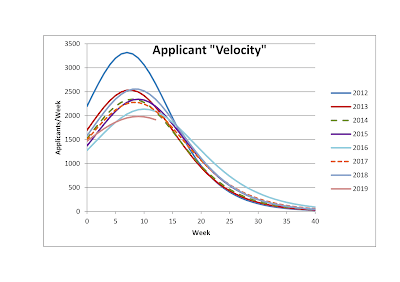 As readers know I like the "velocity" chart, so I am pulling that up again.  In 2012, the Million-Dollar-Express rocketed up to more than 3,000 applicants/week by Week 8, to glide back down in a graceful parabolic curve thereafter.  I would argue that this shows interest was "strong", and the numbers back it up in that the total applicant count was the highest of all.  Later years showed a more modest trajectory - the end results, while less, were respectable, but definitely showed decreased interest.  2016 was the nadir - instead of a moon shot, the curve looked more like a cannon shot.  Long and flat, which would indicate minimal interest in applying to law school.

2017 and 2018 seemed to show renewed interest, tracking the performance of prior years.  But this year has shown the lowest-trajectory yet, which I still find very surprising given the initial stronger start.

What does this mean?  Well, the area under a flat curve can equal the area under a tall curve (that is to mean, total applicant count can be similar in both instances), but we have yet to see anything rival 2012.  What started as something similar to 2012 and 2013 has instead become worse than 2016 despite recent comebacks.  Total applicants will still likely reach somewhere around 60,000, but this is much less that was initially indicated earlier in the cycle.

Perhaps people are still getting the message after all: that a JD is not a sure-fire path to riches or saving dolphins, but a form of modern-day indentured-servitude that few will be able to get out from underneath in any reasonable time frame.  To the extent that this represents a long-overdue market correction, we of the scamblog movement welcome this as the much-needed medicine that has been avoided for a long time.  0Ls, do your research, as this may be the best time to wait a year or more, if not scrapping the idea altogether.

Posted by dupednontraditional at 08:07 16 comments:

Toilets Я Us, Part VII: Profiting from the "non-profit" scam?

After the closure of Charlotte and the announced closure of Arizona Summit, Florida Coastal is the last so-called law school in the InfiLaw scam-chain. Suddenly the profit-oriented firm InfiLaw is eager to turn its sole surviving über-toilet into a "non-profit" entity. Why? Florida Coastal offers some odd-sounding justifications, all of which ring hollow in light of InfiLaw's profit-seeking motive.

Especially interesting is the following:

Florida Coastal officials said that at the end of the process, the law school would be an independent entity. But they didn’t rule out some kind of role for InfiLaw, its parent company.

“We’re not exactly certain what InfiLaw’s final role, if any, will be. But they will not be the owner,” said Jennifer Reiber, Florida Coastal’s dean of academic affairs.

Other institutions, like Grand Canyon University, that have converted to nonprofit status have signed management agreements with their former parent companies after splitting off. Kyle McEntee, the executive director and co-founder of Law School Transparency, said he questioned what kind of arrangement the new nonprofit entity would have with InfiLaw.

“Will InfiLaw be managing or does it hope to manage the law school?” he said.

So it seems that "non-profit" status might involve an "agreement" whereby InfiLaw would "manage" "non-profit" Florida Coastal—for consideration, bien sûr. Is this sort of sweetheart deal with the former owner the new face of the law-school scam? How can an entity be approved as "non-profit" if it intends to cut a questionable deal of this kind?